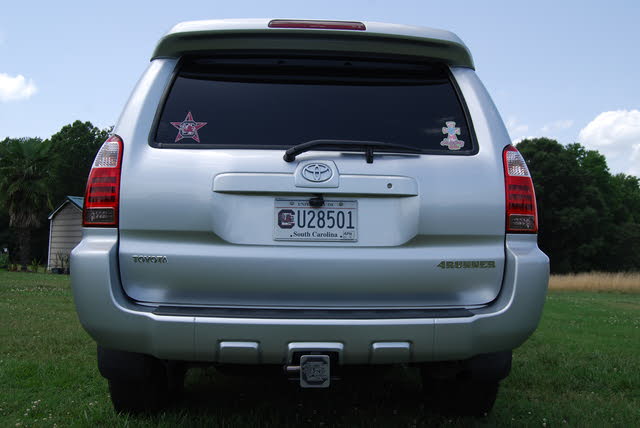 Thanks to strong engines and superior four-wheel-drive systems, the 2009 Toyota 4Runner performs confidently in off-road situations, while still delivering a comfortable car-like ride on suburban and highway streets.

Poor fuel economy remains the curse of all SUVs, but the '09 4Runner also suffers from a small second and third row and lower-than-average cargo room for its class.

Able to transition easily from on- to off-road driving, the versatile 2009 Toyota 4Runner actually behaves like an SUV should, with a powerful engine, tough 4WD traction, and surprisingly nimble handling dynamics. It also offers a long list of standard features in all of its trims at a reasonable price point for families. Though badly in need of an update in terms of interior refinement and exterior styling, the '09 4Runner remains a practical and reliable SUV oriented to both work and family needs.

Mixing true off-road performance with a family-friendly upscale interior, the 2009 Toyota 4Runner comes across as a versatile and powerful midsize SUV. With available V6 and V8 engines, it can tow anywhere from 5,000 to 7,300 pounds, and its two four-wheel-drive systems come equipped with limited-slip differentials, downhill assist, and low-range gearing for superior all-terrain capability.

The 2009 4Runner comes in 12 trims. The base SR5, Sport Edition, and Limited are each offered with either a V6 or V8 engine, and each engine comes in rear- or four-wheel-drive configurations. Equipped with skid plates and 9 inches of ground clearance, the 4WD 4Runner ably tackles all manner of rough roads, yet makes a smooth transition to paved highways and offers a quiet and comfortable ride despite its truck-based platform and suspension. The Sport Edition features a sport-tuned suspension, larger 17-inch alloy wheels, a large hood scoop, and tubular roof and side step rails. The base SR5 rides on 16-inch wheels, while the Limited gets 18-inch ones.

The '09 4Runner seats five in two rows, with the option to add a tiny third row for two more passengers. Although its interior and exterior styling feels a bit outdated to some critics, the SUV remains an attractive choice for families looking to Toyota's reputation for safety and reliability, but who also need extra power and traction for serious work utility and off-road performance.

No major refresh lies in store for the 2009 4Runner, despite some grumblings that the SUV is beginning to show its age. It does gain a second 12-volt power outlet up front, boosting the total to three (including one in the cargo area). The Sport Edition receives a new Trail Edition option package, which adds a locking rear differential, 16-inch alloy wheels, Bilstein shocks, tubular side rails, A-TRAC active traction control, and color-keyed handles and grille. On the inside, this package adds waterproof fabric, leather trim, and a standard navigation system and Bluetooth. 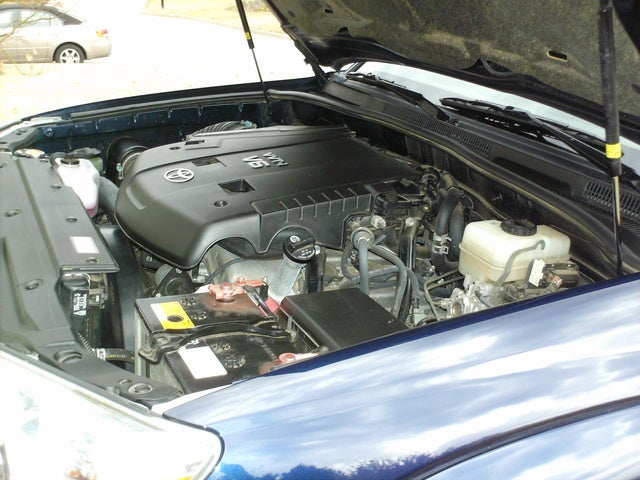 Every trim in the '09 4Runner lineup offers a choice between two powerplants. The 24-valve, 4.0-liter DOHC V6 delivers 236 hp and 266 lb-ft of torque at a low 3,800 rpm. It can tow up to 5,000 pounds and features variable valve timing to help improve fuel economy. Although not bad for an SUV, its 18/22 mpg rating disappoints most owners and critics, as does the 17/21 rating for 4WD models.

Both engines come paired with a five-speed electronically controlled adaptive automatic transmission, which adjusts shifting dynamics according to road and driver input. Test drives report that both the V6 and V8 offer impressive power, and owners like their superior cargo-hauling capabilities. If you're more concerned about saving a bit at the gas pump, the V6 offers better fuel economy combined with confident power, and most everyday SUV drivers won't need the more aggressive V8 engine. However, both the Nissan Pathfinder and Kia Borrego offer comparable or more V8 power with better mileage.

With its truck-based body-on-frame chassis, the '09 4Runner feels solid and capable on the road, with a rigid and firm suspension that comes in handy for off-road use, but still manages to feel smooth and agile on paved highways. Many critics and owners comment on how comfortable the ride is for a truck-based SUV. Its body-on-frame design features large engine mounts that also help to reduce noise getting into the cabin, making the 4Runner one of the quieter SUVs in its class.

Rear-wheel-drive versions feature a limited-slip rear differential, while 4WD versions feature center locking and limited-slip differentials. The 4WD system paired with the V6 engine is part-time, allowing the driver to select between high- and low-range gearing, while the V8 4WD is a full-time automatic system that defaults to a 40/60 front-to-rear wheel split, but will distribute more torque when needed. Owners find the 4WD above average, proving a lifesaver in mud and snow.

The double wishbone front suspension offers surprisingly agile handling for a midsize SUV, but the 4Runner's tall height and heavy weight do translate into some body lean on winding curves and a tendency to sway or wander on bumpy roads. One critic experienced a lot of bounce and jolts on rougher roads. The X-REAS sport-tuned suspension on the Sport Edition feels tighter, responsive, and more controlled when cornering, minimizing body lean, but also delivers a harsher ride to passengers. An optional auto-leveling suspension for the V8 4WD trims adapts the tuning and ride height to road conditions to improve handling, especially when towing heavy loads.

The 2009 4Runner comes standard with two rows of seats for five passengers, but families needing a little more space might want to opt for the optional third row available in the SR5 and Limited, which boosts capacity to seven people. On the downside, however, this row offers little in the way of legroom for either adults or kids and does not fold flat into the floor. It either folds to the side or can be removed.

The second-row bench split-folds flat 60/40 and offers a fold-down armrest that features a pull-out tray with cupholders and bag hooks. Second-row passengers also don't get much in the way of legroom, with only 34.6 inches compared to 41.8 inches in the front row. Headroom also earns some complaints from taller owners, but the 39 inches feels generally spacious thanks to the low-mounted seats. An optional sunroof cuts into headroom further. Although equipped with side rails, the step-in height for the '09 4Runner makes access to the rear rows somewhat difficult.

The cargo bay, small for its class, expands from 42 cubic feet to 75 with the back seats down. It comes with tie-downs on both the floor and sides, a 12-volt power outlet, and can be equipped with an adjustable two-tier storage unit. A roof rack provides more storage options. Owners appreciate the power rear window, but it does not flip up independently from the tailgate itself. The cargo area also features backup mirrors mounted on the rear roof pillars to provide a clearer sight line.

Test drivers find the driver ergonomics to be generally logical and comfortable, with controls that are large and easy to reach. However, some say the gauges are recessed too deep to be able to read clearly, and the joystick controller for the climate settings feels imprecise. A three-pod instrument cluster (compass, temperature, inclinometer) that sits on top of the dash adds a retro nod to the interior. All trims feature 8-way and 4-way power front seats for driver comfort, with the SR5 and Limited adding power lumbar support. Driver's side memory settings also come standard on the Limited. All trims have a tilt and telescoping steering wheel with audio and cruise controls, except the base SR5, which has only a tilt feature. All trims feature waterproof glass.

Despite its rugged pretensions, the 2009 4Runner actually feels refined inside, with a good list of standard equipment for the price you pay. The base SR5 features power accessories, cruise control, a CD/MP3 player with input jack, remote entry, and automatic climate control. The flashier Sport Edition offers chrome roof rails, wheel-mounted controls, power front seats, and a sport-tuned suspension. The high-end Limited adds heated leather seats, a 6-CD player, leather and wood trim, and a black roof rack. A special Urban Runner Package adds a host of technology, including a 10-speaker JBL sound system, a DVD player, a voice-activated navigation system, Bluetooth, and a sunroof.

Built to be solid and reliable, the 2009 4Runner does well in crash tests, earning five stars for side impacts and four for frontal impacts. Rollovers still garner only three stars, but the Insurance Institute gives the SUV a Good rating. All trims come standard with the STAR Safety System, which includes traction and stability control, Hill Start Assist, 4-wheel disc and ABS brakes, electronic brakeforce distribution, and brake assist. Trims equipped with 4WD also get Downhill Assist Control to help minimize wear and tear on the brakes.

Minimizing crash impacts are the standard dual front-side airbags with passenger cutoff and side curtain airbags with rollover sensors for the first and second row. A tire monitor keeps a check on pressure, while standard foglights help with visibility. Rear pillar-mounted mirrors in the cargo area expand visibility out the back, which also gets much needed help from the optional rearview camera.

No reviews yet from owners of the 2009 4Runner, but the virtually identical 2008 version receives its biggest complaints for its poor fuel economy and pocket-emptying, gas-guzzling ways. Other negatives include a small back seat, limited headroom, and a bland interior style. There have been several less-than-favorable reports about the joystick-like climate controls, which make it hard to pinpoint an exact setting.

Favorable reviews far outweigh the negatives, however, with the V6 and V8 powerplants receiving top marks from owners, particularly when it comes to towing ability. Drivers also find the handling car-like, with an overall quiet and comfortable ride. The SUV's solid build and reputation for high reliability and resale also earns rave reviews, as does the 4WD's performance in snow. Many owners also single out the power rear window as an unexpectedly nice feature.

CarGurus owners also have yet to comment, but 2008 owners share the adulation for the '09 4Runner's durability and build quality, which requires very low maintenance and repair costs. Its off-road performance, smooth yet firm ride, engine power and acceleration, and roomy cabin also rate highly. The only room for improvement seems to be in the SUV's fuel economy.

Users ranked 2009 Toyota 4Runner against other cars which they drove/owned. Each ranking was based on 9 categories. Here is the summary of top rankings.

Have you driven a 2009 Toyota 4Runner?
Rank This Car

I have a 2009 Kun26R 3L turbo diesel Hilux with a timing issue. I have checked 3 timing marks on the timing belt but it still runs in reverse. Any ideas?

My 4x4 switch won't light up, can I replace the bulb? What's the process of fixing it?