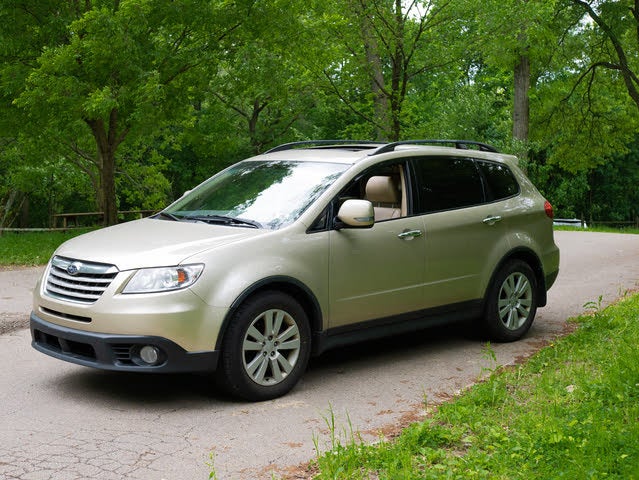 After a major overhaul last year, the 2009 Subaru Tribeca gains a Ruby Red Pearl exterior color and makes the Diamond Gray color available on its Base trim. Otherwise, the midsize crossover SUV, Subaru's largest and its only vehicle with three rows of seating, returns unchanged.

The family-oriented Tribeca ute comes in both five- and seven-passenger (two- and three-row) versions, in Base and Limited trims. Its full-time symmetrical all-wheel-drive system automatically apportions torque where needed to combat slippery roads, but without low-range gearing, it's not intended for off-road performance. Nevertheless, its road grip remains superb and contributes a lot to the 2009 Tribeca's 5-star safety profile. Both trims feature a 3.5-liter DOHC boxer-six engine and 5-speed automatic with sport-shift. Together, the powertrain delivers 256 hp and 247 lb-ft of torque, as well as up to 3,500 pounds of towing capacity when equipped with the optional tow package. Variable valve timing and Dual Active Valve Control supposedly improve fuel economy, but its 18/23 mpg hardly impresses.

The 2009 Tribeca comes standard with two rows, with a reclining second row that also slides 8 inches forward and back to accommodate more cargo or offer more legroom. It split-folds flat 40/20/40. Cargo capacity starts at 37.6 cubic feet and expands to 74. Adding the third row significantly cuts down on rear leg and cargo room, and only kids will feel somewhat comfortable here. With both second- and third-row seats up, cargo capacity is a mere 8.3 cubic feet, enough for a few grocery bags and not much else. Most drivers complain about this useless row and lack of both leg and headroom. The third row also folds flat 50/50. The cargo area features tie-downs and underfloor storage. Roof rails are standard on the Limited, optional on the Base.

Equipped with standard traction and stability control, 4-wheel ABS brakes with Brake Assist, a tire monitor, 18-inch wheels, rollover sensors, and dual front-side and side curtain airbags for the first two rows, the 2009 Tribeca earns five stars in all categories but rollover, where it earns four. Side curtain airbags for the third row are unfortunately not available, but a rearview camera helps with the limited visibility caused by the small rear window and thick rear pillars.

The 2009 Tribeca does offer a long list of standard features in its Base trim, including power front seats, wheel-mounted audio and cruise control, leather trim, and a CD player with MP3 jack, but the Limited represents the luxury model here. It adds heated leather seats, memory settings, a sunroof, and a 6-CD changer. Options tack on a navigation system and DVD player. These features make the 2009 Tribeca a substantive choice for young families looking for a stylish and safe SUV. Supportive seats, a roomy second row, and car-like handling impress owners. However, significant engine noise, a wide turning radius, and spongy brakes may disappoint those looking for the more refined ride found in rival SUVs.

What's your take on the 2009 Subaru Tribeca?

Users ranked 2009 Subaru Tribeca against other cars which they drove/owned. Each ranking was based on 9 categories. Here is the summary of top rankings.

Have you driven a 2009 Subaru Tribeca?
Rank This Car

Hi 2009 Tribeca - 2 years ago had HG done, waterpump, rad, Tstat, and heater core flush (was blocked). Been fine for 2 years, now overheating issue is coming back but I am catching it early and want...

150 views with 3 answers (last answer about a month ago)

I have a 5 cd changer that doesn't work, says error when you try to put in cd, none in there now, Can I upgrade stereo to be bluetooth capable to connect my phone for music.

Can We Retrofit The Original GPS In The Dash Of A 2009 Subaru Tribeca With ...

Remote started, ran for approximately 10 minutes got in without putting key in ignition and tried to put in gear. Once I hit the brake to put in drive the vehicle died and now I have no power, noth...

The Rear Diff Temp light flashes on and off while driving. It does not stay on and usually happens when accelerating. This happened once before and dealer changed fluid. It is back again after a cou...