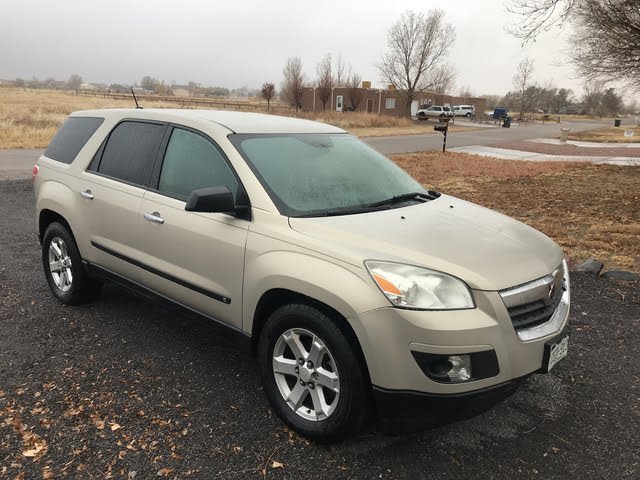 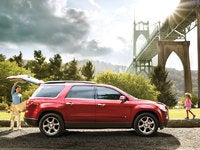 Looking for a Used Outlook in your area?

A three-row SUV that can actually seat eight adults, the roomy 2009 Saturn Outlook offers class-leading cargo space, a superior safety profile, and a reliably solid and comfortable ride around town.

Poor visibility out the rear window remains a dangerous hazard in the 2009 Outlook, pretty much necessitating the purchase of the optional rearview camera.

While it won't win any beauty pageants, the '09 Outlook offers the roominess and practicality of a family-oriented SUV combined with the easy handling and accessibility of a smaller car. Though it lacks some of the features and options found in similarly priced vehicles, the Outlook offers large families a safe, reliable, and better-looking alternative to a minivan.

As one of the largest midsize SUVs on the market, the 2009 Saturn Outlook earns top marks for its interior capacity, which can comfortably accommodate eight adult passengers and a class-leading amount of cargo. Its car-like handling and responsive acceleration minimize the somewhat unwieldy maneuverability caused by its large dimensions, and while its exterior style may not set hearts a-pounding, it fulfills its function as a comfortable, well-appointed, and reliable family hauler.

Sharing a design and platform with the Buick Enclave, GMC Acadia, and Chevrolet Traverse, the 2009 Outlook returns in XE and XR trims, each offered with rear-wheel or on-demand all-wheel drive. Seating up to eight in three rows, both ride on 18-inch wheels and come well equipped with power features, a CD player, and rear climate control. The XR adds a more luxury feel with heated leather seats, wood accents, and a power driver's seat, as well as more convenience options. It also features twin exhausts, which boost engine power slightly over the XE's.

Adjustments to the 3.6-liter V6 engine include the addition of direct injection, which increases horsepower, and a new engine mount to help reduce engine noise and vibration even more in the already quiet '09 Outlook. Leather seats and Bluetooth are now standard in the top-end XR trim and optional for the XE. New XE options for 2009 include heated seats, a standalone rearview camera (previously bundled with the navigation system), and two different Bose sound systems. The XR's optional navigation system gains real-time traffic updates, and a new Touring Package offers 20-inch alloy wheels and rear cut-outs for the XR's dual exhaust. 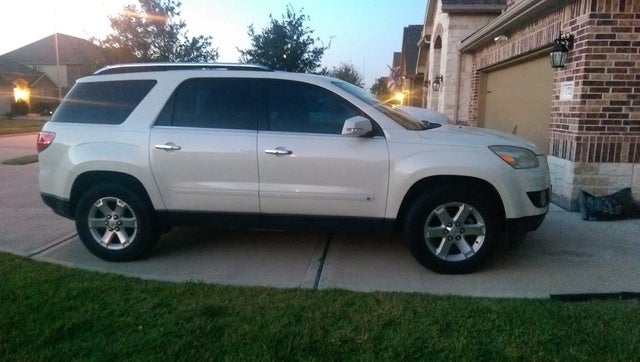 The addition of direct fuel injection technology leads to a boost in both horsepower and torque in the '09 Outlook's 24-valve, 3.6-liter DOHC V6 engine. Paired with a six-speed automatic with manual mode, this powertrain now puts out 281 hp and 253 lb-ft of torque in the base XE, a jump of 13 over last year's numbers. The dual exhausts in the XR tweak those numbers higher, to 288 and 270 respectively. Torque kicks in at a fairly low 3,200 RPM, meaning acceleration happens early and strongly, giving this heavy, large SUV sufficient power for highway driving. Though no powerhouse, critics find the Outlook's acceleration quick and confident. When properly equipped, the Outlook can tow up to 4,500 pounds.

Also new this year is variable valve timing, which helps improve fuel economy somewhat. Remember, however, this is an SUV, and a heavy one at that, so mileage numbers barely make it out of the high teens. The front-wheel-drive trims average 17/22 mpg, while the AWD reduces numbers slightly to 16/21.

The '09 Outlook measures 200.7 inches long, only 1 inch shorter than the full-size Chevy Tahoe. However, its long 119-inch wheelbase, combined with a wide stance and short overhangs, helps to minimize some of the awkward maneuverability associated with large SUVs. In fact, several critics from both 2008 and 2009 find its ride quite stable and solid, with the '09 Outlook exhibiting minimal body lean for its size.

Easy handling can be attributed to the car-like setup of its unibody frame and its fully independent Macpherson strut front and multilink rear suspension. One test driver says it drives a lot smaller than it looks, which should appeal to family-oriented buyers who need the space and comfort of a large SUV without the truck-like handling. The AWD system defaults to a 60/40 front-rear torque split, but automatically apportions power to the appropriate wheels when it feels slippage. It adds reliable grip in slippery climates and provides an extra dose of confidence.

In general, the automatic transmission operates responsively, although one test driver finds the downshifting slightly slow. Several reviewers find the suspension and steering predictably soft, but not overly so. All drivers agree the ride is quiet and smooth, free from any intrusive engine or tire noise and adding to the overall comfort of passengers. The '09 Outlook does not deliver interactive driving dynamics, but rather aims at making the driver's life easy and trouble-free.

Featuring three well-appointed rows, the 2009 Outlook seats seven or eight passengers, depending on whether you choose a second-row bench or bucket seats. Choosing the optional bucket seats also adds a second-row center storage console. The Outlook's long wheelbase and wide dimensions provide for comfortably adult-size room in all three rows. First- and second-row passengers get 41 and 36.9 inches of legroom, while the third row gets an unbelievable 33 inches. While still tight for long-legged passengers, it surpasses the larger Chevy Tahoe's third row by nearly 8 inches and the Honda Pilot's by 3 inches. Its 40 inches of headroom throughout the cabin also allows for 6-footers in all three rows, although long trips might start feeling cramped.

Both second and third rows split-fold 60/40 and fold nearly flat, for a class-leading 117 cubic feet of cargo space. With the second row up, space contracts to 69 cubic feet, and with all rows up, the bay still holds 24 cubic feet. Tie-downs and an underfloor compartment come standard, and a cargo cover and net can be added, along with a power liftgate. A roof rack is standard on the XR (optional for the XE) and can be equipped with crossbars.

Critics and owners find access to the third row easy and carefree, thanks to a low step-in height and the second row's SmartSlide feature. The second row cushions flip up, and at the quick touch of a lever, the seats slide forward flush against the back of the front seats. This is true of both the bench and buckets. Second row passengers also get their own climate controls, and audio controls are available as an option.

A high ride height helps with driver visibility up front, but thick rear C pillars greatly obscure the view out the back. Rear blind spots remain a hazard in the '09 Outlook, and most drivers recommend getting the rearview camera and backup sensors. Tilt and telescopic steering and wheel-mounted audio and cruise controls on all trims provide added driver comfort, and XR trims feature an 8-way power driver's seat with power lumbar settings. A power passenger seat is available. While many owners appreciate the convenient and easy ergonomics of the dash layout, some critics find the buttons too small and too similar, making it hard to distinguish one from the other at first.

Although not particularly exciting, the well-appointed cabin consists of quality materials, with both high-grade cloth and leather upholstery. The faux wood trim in the XR convincingly conveys a high-end feel. Base XE trims feature full power accessories, remote entry, cruise control, and a CD/MP3 player with satellite radio. The XR ups the luxury factor with leather and wood trim and heated leather seats. The '09 Outlook also offers many high-end options, such as memory settings, a dual-pane sunroof, remote start, a rear DVD entertainment system, and an XR-only navigation setup.

Safe, solid, reliable – words that consistently come up in reviews and user commentary about the 2009 Saturn Outlook. The NHTSA seems to agree, giving the SUV five stars in every category of crash test except rollovers, where it still earns an excellent four stars.

Parents cite the long list of safety features as an important factor in their decision to buy the '09 Outlook. Standard equipment includes traction and stability control with rollover sensors, 4-wheel ABS brakes with electronic brakeforce distribution, dual front airbags, and side curtain airbags for all three rows. Also on the list are a tire monitor, automatic headlights, and OnStar service. Xenon HID headlights and backup sensors can be added, and the new rearview camera option, now available for both trims, helps enormously with the rear blind spot problem.

Owners of the '09 Outlook love its practical roominess, with abundant cargo space and a third row that comfortably fits an adult-size passenger. Its cabin size, safety profile, and easy access to both rear rows all contribute to the kid-friendly atmosphere of the SUV, says one driver. Many appreciate its smooth and quiet ride, with one driver claiming the Outlook feels smoother than his previous Mercedes SUV. Others say the Outlook, with its long list of features and strong safety record, represents a good buy for the money. Many like its fuel efficiency, but others say their mileage numbers fall disappointingly below the EPA estimates. The major complaint remains rear visibility.

The '09 Outlook has yet to receive comments from CarGurus owners, but the similarly equipped 2008 version earns high praise for its smooth ride, quiet cabin, and interior space. Drivers say the SUV feels solid and confident on the road, and find the stylish looks an extra bonus. The Outlook offers the roominess and practicality of a minivan without the boring boxiness. The power liftgate seems to be a favorite feature. Negative comments echo those of 2009 owners, with rear visibility and fuel efficiency topping the list.

What's your take on the 2009 Saturn Outlook?

Have you driven a 2009 Saturn Outlook?
Rank This Car

Looking for a Used Outlook in your area?

My 2009 Saturn Outlook Will Not Start. New Battery, Battery Checked It Is G...

Anyone Know What The Cause Is..

My Saturn Outlook 2009 XR first the radio started blitzing out off and on and the lights would say engine power reducing some times randomly, Then the truck got to where it didn't want to accelera...

We Just Purchased A Car Listed On Car Gurus From Champion Buick In Brighton...

we took the outlook to a GM dealer and had them do a quick analysis on it to see what was wrong and it came up with "PO303" misfire cylinder #3, and P2096 post catalyst, fuel trim? too lean. The servi...

I Accidently Put My Husband's Truck Key In The Ignition Of My Saturn Outloo...