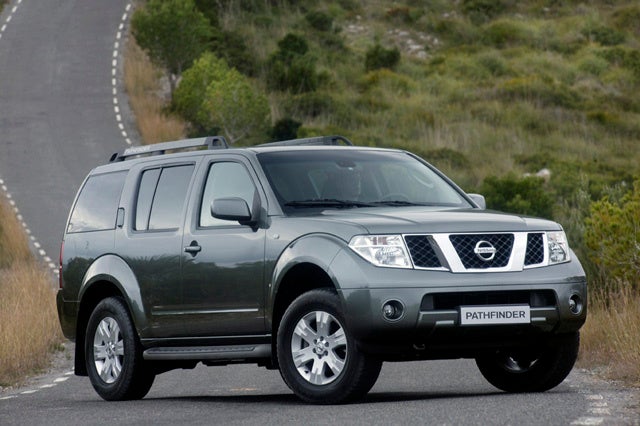 Powerful and rugged, the 2009 Nissan Pathfinder offers better-than-average towing and hauling capacity, as well as an attractive cabin, with ample storage and comfortable seats.

A hefty price, gas-guzzling V8 engine, unrefined ride, and cramped second- and third-row seating might cause buyers to pass up the ’09 Pathfinder in favor of more civilized and economical competitors.

The 2009 Nissan Pathfinder is a more-than-capable hauler, as well as a superb off-road vehicle. This does not, however, make it particularly adept around town or on the highway. Though touted as family-friendly, the ’09 Pathfinder is far from refined and suffers from being mired in a dying breed.

Nissan has decided that less is more for its 2009 Pathfinder. As the only significant changes from ’08, the automaker removed the rear-wheel-drive SE-V8 and the rear-wheel-drive LE-V8 from its ’09 lineup, leaving the Pathfinder 4WD LE-V8 as the sole bearer of an eight-cylinder powerplant. For 2009, all but two of pathfinder’s trims will be available in both rear-wheel-drive and four-wheel-drive configurations; the SE Off-Road and LE-V8 are now offered in 4WD. This year's Pathfinder, though running a tad leaner, still features five trims: S, SE, SE Off-Road, LE, and LE-V8.

With a body-on-frame construction based on the full-size Nissan Titan pickup and the brutish Armada SUV, the ’09 Pathfinder is a load-hauling, trailer-towing mule, with plenty of power, able to carry all the toys, and all the family, to the mountains or the lake.

Though a capable off-road vehicle, most reviewers find the ’09 Pathfinder not quite so friendly on asphalt. The Pathfinder’s harsh ride and truck-like handling on paved roads make many of the newer and more refined crossovers, such as the Dodge Durango, Kia Borrego, Toyota 4Runner, and Ford Explorer, a better choice for seven-passenger comfort and refinement. 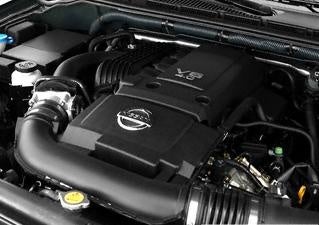 Reviewers note the 4.0-liter V6 engine to have adequate acceleration (0-60 in 7.8 seconds) and reasonable power for passing and merging, but also find it noisy and coarse-sounding at full acceleration. The 4.0-liter V6 is also noted by at least a couple of reviewers to struggle a bit when tasked with any sort of hill-climbing.

Both of Pathfinder’s engine offerings are combined with a five-speed automatic transmission that professional reviewers find a touch slow on the downshift, but which allows all the available horses in either the V6 or V8 to come to a full gallop when needed.

A body-on-frame construction results in what most reviewers and owners agree is a harsher ride for the ’09 Nissan Pathfinder. Though this rugged design does make for a more off-road-friendly Sport Ute, rough pavement can be a challenge, and agility around town suffers.

The ’09 Pathfinder’s four-wheel independent suspension is claimed to mitigate much of the bumping and jarring, and a double-wishbone suspension, front and rear, as well as front and rear stabilizer bars keep the Pathfinder on the straight and narrow even over the roughest terrain. Professional reviewers note, however, a disturbing lean and noseplow in even moderate corners, and the Pathfinder’s wide turning radius makes it difficult to handle in tight spaces. Steering is found to be true, and braking noted as effective with good pedal feel.

The ’09 Pathfinder S and SE Off-Road trims are each equipped with standard 16-inch alloy wheels, the SE with 17-inch alloys, and the LE with 18-inch wheels. The SE Off-Road mounts standard all-terrain tires, which reviewers find excessively noisy on the highway.

Most reviewers find the ’09 Pathfinder’s gauges and controls easily readable and accessible, and cabin storage to be above average. The Pathfinder also offers an impressive 79 cubic feet of cargo capacity with the rear seats folded flat.

Comfort and convenience features in the ’09 Pathfinder are noted to be family-friendly, if not exactly plush. Reviewers do note that the Pathfinder's seats are comfy, and head and legroom are ample in front, about average (a bit cramped) in the rear seats.

Too few creature comforts, a stiff and bumpy ride over uneven pavement, poor gas mileage, a loud and coarse-sounding V6 engine, and an annoying vibration over 60 mph are all common complaints from owners of the 2009 Nissan Pathfinder. As well, a number of owners complain about the lack of legroom in the Pathfinder’s rear seats. Some disturbing quality issues were also mentioned by a few owners.

These complaints were mitigated, however, by the compliments garnered from owners of the ’09 Pathfinder. Such pluses as its rugged construction, exterior styling, hauling and towing capacities, responsiveness, V6 or V8 power, as well as its legendary off-road capabilities, make the Pathfinder well worth a look.

Niceties like ample storage and cargo space, and a super Bose stereo system, plaudits for the five-speed automatic, and raves about the V8 engine are a definite plus with owners. Other notable details, such as the manually adjustable driver’s lumbar support and the Pathfinder's high stance, are specifically mentioned by more than a few owners.

What's your take on the 2009 Nissan Pathfinder?

GuruLR3VS Mileage sucks and the plastic dash is not as good as leather, but its better than my old Ford pickHup that never ran more than five days without a major repair. NISSAN is good. Definately better than the Dodge Jeep Patriot I had and wrecked. I hated that coke can auto body and the rinky tink trans was the pits.

Users ranked 2009 Nissan Pathfinder against other cars which they drove/owned. Each ranking was based on 9 categories. Here is the summary of top rankings.

Have you driven a 2009 Nissan Pathfinder?
Rank This Car

Truck never made noise, sounded new..replaced starter...now there is rattling noise as if about to turn off..in park, red light and driving. Is something loose? 4wd

I Have 3 Repossessions Just Due To Bad Mistakes. My Car Note Will Be Too Hi...

I Own Nissan Pathfinder And I Want To Find The Location Line Pressure Switc...

Does anyone else have noise problems with their cabin fan heater? I find that it makes a very annoying buzzing, fluttering noise at all power levels. The fan unit was already replaced once which makes...