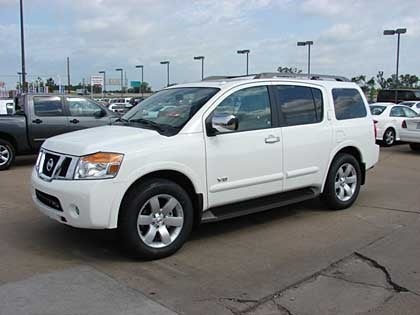 Built like a tank, and with a powerplant to match, the 2009 Nissan Armada also comes loaded with creature comforts and looks sharp, on-road or off.

Horrible gas mileage, a cramped third-row seat, and a lack of refinement, not to mention engine choices, may make the ’09 Armada a second or third choice for buyers.

There’s no question that the 2009 Nissan Armada is built to take on some heavy-duty hauling, towing, and off-roading. It’s also feature-laden and priced right. However, poor gas mileage, a distinct lack of posh, and a declining market are fueling rumors of change on the Armada’s horizon.

The 2009 Nissan Armada ventures forth undaunted by the stormy future for large, truck-like SUVs. This big Sport Ute is well equipped to handle the journey, however. With a beefy, Titan-inspired, body-on-frame construction that’s ideal for off-roading and a big V8 that’ll tow over 9,000 pounds, the ’09 Armada is a formidable, yet reasonably affordable presence in this shrinking market.

The ’09 Armada is a five-door, eight-passenger, full-size SUV that’s available in two trims, SE and the high-end LE. Each trim level is available with either rear-wheel drive (RWD) or four-wheel drive (4WD), and each offers standard third-row seating as well as the standard 5.6-liter V8 engine, which is available with Flex Fuel, E85-ethanol-capability; with or without the Flex Fuel system, the 5.6-liter V8 offers equal performance and mileage specifications.

After some extensive modifications in ’08 that included a more comfortable cabin, some better-quality cabin materials, and upgraded interior ergonomics, the Armada offers only a few feature upgrades for 2009. Available heated front seats, Bluetooth hands-free technology, and standard power-folding/auto-dimming exterior mirrors on the LE are pretty much the extent of the Armada’s changes this year.

A roomy SUV, the ’09 Armada offers some 91 cubic feet of cargo space with the rear seats folded down and some 20 cubic feet with all seats upright. 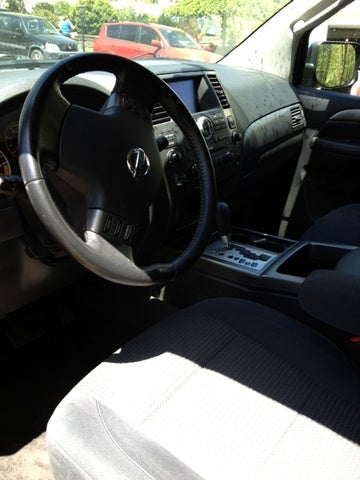 The only engine and transmission offered with the 2009 Nissan Armada is a 5.6-liter, DOHC, variable-valve-timing V8 that’s mated with a five-speed automatic. This combination puts out 317 hp at 5,200 rpm and 385 lb-ft of torque at 3,400 rpm. The big V8 uses regular gas, but is available in a Flex Fuel version in some areas.

The five-speed automatic is equipped with a tow/haul mode, which allows the ‘09 Armada to climb any mountain and haul (almost) any trailer – when properly equipped.

Professional reviewers are impressed with the ’09 Armada’s acceleration and its heavy-duty towing power. The transmission shifts rapidly and smoothly, no matter the load or the strain. Opinion among reviewers is divided, however, as to whether the V8 is “throaty” or just plain loud during rapid acceleration.

The ’09 Armada comes equipped with a double-wishbone four-wheel independent suspension, with front and rear stabilizer bars. The top-end LE trim features a standard self-leveling suspension, while a load-leveling rear suspension system is offered as an option with the tow packages available for both the SE and LE trims. Armada’s 4WD trims offer on-demand shifting, a center-locking limited-slip differential, and auto-locking hubs.

Reviewers are very impressed with the way the ’09 Armada rides and handles, noting that, though a tad stiff, the Armada’s suspension does a good job of handling the roads around town. A bit of bounce and jounce is noted, however, at highway speeds on patchy pavement. Corners are handled nicely by the Armada, with little appreciable lean or noseplow.

Steering is noted as adequate, but a bit slow reacting to the wheel. Braking is described by reviewers as good, though a few professional reviewers find a tad too much play in the pedal.

Generally reviewers find the amenities that are offered as standard on the 2009 Nissan Armada to be generous and well presented. Though not plush, by any means, the Armada provides comfort, convenience, and appearance features aplenty. Gauges and controls are, by and large, easy to read and well located, an exception being the climate control dials, which are not easily discernable in sunlight and could be a stretch for drivers to reach.

Options for the SE include many of the LE’s standard amenities, including a 265-watt Bose Premium Audio system with 12 speakers and a subwoofer, Sirius/XM satellite radio, the HomeLink universal transceiver, and leather upholstery. Additionally, a power sunroof, rear-seat DVD entertainment system, a Class IV towing package, and front side-mounted airbags also are available.

The National Highway Transportation Safety Administration (NHTSA) give the ’09 Armada five stars for front impact driver safety, four stars for front passenger safety and a three-star rollover rating. The '09 Armada has not been tested by the Insurance Institute for Highway Safety (IIHS) yet.

For 2009, the Nissan Armada gained mostly praise from owners, but its gas mileage did not. Though most owners were resigned to the Armada’s appetite for fuel, given its size and capabilities, virtually all felt Nissan could do better. In addition, airbag lights that won’t shut off, the lack of plush cabin features, and no standard power-retractable mirrors are disappointing to a few owners. In isolated instances, owners complain of transmission problems, odors from the air-conditioning system, and a seeming lack of build quality.

An overwhelming majority of owners, though, laud the ’09 Armada for its low price and its undeniable value. As well, ride quality, seat comfort, roominess, styling, both exterior and interior, towing capacity, plentiful cabin amenities, engine performance and acceleration, Nissan reliability, and that killer Bose audio system, were all given kudos by owners.

Have you driven a 2009 Nissan Armada?
Rank This Car

My armadas front ac wont blow at all. It has dual climate control. And the driver side and passenger side dont blow. Rear control or the back ac works perfect. Help?