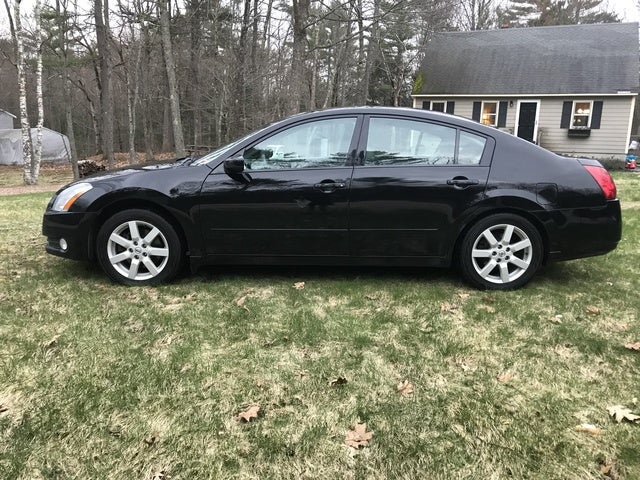 The cabin of the '09 Altima feels more restrictive than those of its midsize competitors, and a confusing and often unwanted bundling of options significantly raises the pricetag.

The '09 Altima offers two powerful engines and class-leading fuel economy, but its strong points lie in its athletic, performance-oriented handling. While it meets all the criteria of a family sedan in terms of space, interior comfort, and high-end features, the '09 Altima clearly sets its sights on drivers looking for an interactive experience as much as sedan practicality and refinement.

One of Nissan's best-selling vehicles, the Altima combines family-friendly space and comfort with driver-friendly performance and handling. The front-wheel drive midsize sedan offers a sportier ride than the Accord and Camry, comparable fuel economy, and a satisfying array of standard features. The '09 Altima gets minor changes, including three new exterior colors, an automatic door-locking feature for all trims, and power mirrors and a trip computer for the base 2.5. New options for the 2.5S include rear air vents and dual-zone climate control.

Though not as refined as the Accord or as upscale as the Camry, the 2009 Nissan Altima offers much more in the way of driving dynamics, power, and performance. While everyday drivers and families will be plenty satisfied with the powerful four-cylinder engine, the V6 represents a noticeable step up in energy and pep, suited for those looking for a more direct and exciting driving experience. 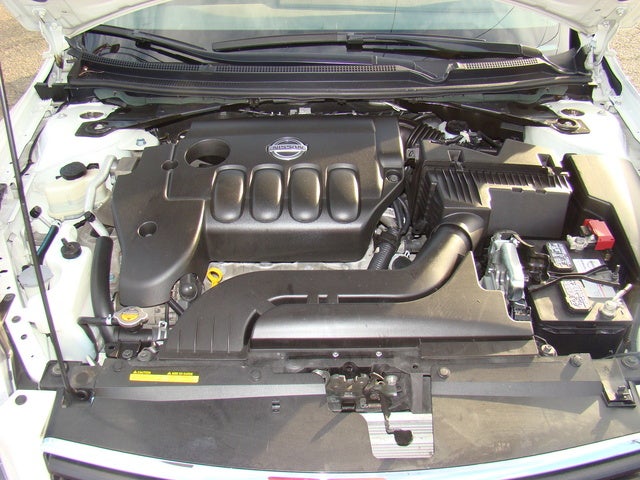 The '09 Altima offers two engine choices and an economical Hybrid. The 2.5-liter DOHC inline four found in the Base and S trims puts out 175 hp and 180 lb-ft of torque. Paired with a either a 6-speed manual or CVT (continuously variable transmission), fuel economy averages 23/32 mpg city/highway, and 0-60 times measure a class-leading 7 seconds. The more powerful 3.5-liter V6 gets 270 hp and 258 lb-ft of torque, with 0-60 times reported as low as 6.3 seconds. Though fuel economy numbers drop, it still averages a decent 19/26 mpg.

The CVT contains an infinite number of gears to allow for more-seamless gear transitions without the drop in RPMs associated with automatic transmissions. It also improves fuel economy, and the Nissan proves this by besting the other midsize sedans in this segment. The transmission garners mixed reviews, however, with some critics preferring the straight-up manual, while others say it is more smooth and responsive than the 6-speed. Most owners find it difficult to adjust to at first, but quickly get the hang of its mechanics. It generally rates very favorably with Altima owners.

Finally, the Hybrid combines the four-cylinder engine with a 40-hp electric motor, for a 198-hp output and 35/33 mpg. While this fuel economy ranks high among normal midsize sedans, it does not match the numbers of the Prius. Able to run on the electric motor at low speeds, the gas engine at higher speeds, or a combination of the two, the Hybrid features regenerative braking for the 245-volt battery and comes with an electronic version of the CVT. The electric motor can also power up the Altima from a stop. On the downside, the Hybrid is offered only in the eight states that meet California's strict emission standards.

Various comparison tests put the '09 Altima at the head of the pack for its dynamic handling and performance capabilities, while others slot it just below the Mazda6. In all cases, it earns high marks for a true sport-sedan feel behind the wheel. The combination of CVT and V6 make the most of the power and torque range, with one test drive revealing the Altima hits its peak horsepower 900 RPMs sooner than the Accord, Camry, or Mazda6.

Nimble, athletic moves and tight cornering make the sedan feel right at home on curvy back roads. The heavier Hybrid feels slightly less agile, but still performs well for the everyday driver. The only negative seems to be the generally light steering, which feels soft and disconnected. Some owners report annoying understeer, which detracts from the otherwise tight handling. Reviewers seem less than impressed with the braking action as well. While the 4-wheel discs are responsive, they require a long stopping distance of over 130 feet.

The four-wheel independent Macpherson strut front and multilink rear suspension gets sport-tuning in the SE trim. Along with larger 17-inch wheels, this contributes to a firmer, more sport car-like ride. However, it also translates into increased harshness and reduced bump absorption, taking away from some of the comfort factor on long drives. Those looking for a more sedate family car experience should opt for the competent four-cylinders or the more luxurious 3.5SL. Minimal noise and vibration intrudes into cars equipped with either engine, although some owners report a little whine from the 2.5 at high speeds.

The '09 Altima comfortably seats four, although most critics agree that head and legroom in the back seat feels cramped and falls behind that in the Accord and Mazda6. While rear passengers get only 35.8 inches for their legs and 6-footers might bang up against the 36.8 inches of headroom, front passengers can luxuriate with nearly 44 inches of leg-stretching room. Drivers will also appreciate such standard conveniences as tilt and telescopic steering in all trims and 8-way power-adjustable seats in the SE and SL. Critics and owners alike point out that seats are supportive without being too firm, making longer trips just as comfortable as short hops to the corner store.

Interior improvements last year added more soft-touch surfaces, but the '09 Altima's cabin still does not quite match the higher-end style of the Mazda6 or Camry, with critics complaining about the continued use of cheap and hard plastic materials. Gauges and controls feel intuitive and ergonomically well-placed, with the push-button ignition (standard in all but the base trim) earning overwhelming praise from owners of the '09 Altima. Some reviewers find the navigation system, which absorbs the audio and climate controls, to be overly complex.

Rear seats split-fold 60/40 nearly flat, opening onto a decent-sized 15.3-cubic-foot trunk. However, the sloping roofline forces the trunk lid hinges to impinge into the cargo space, limiting the size of the opening. Interior storage compartments in the sedan are limited to the glovebox, a center and overhead console, seatback pockets, and front and rear cupholders.
Base models come decently equipped with power features, cruise control, a trip computer, air-conditioning, and a 4-speaker radio, but no CD player. The best-value-for-the-money S (as well as the Hybrid) adds the well-liked Smart Key keyless ignition and a CD player with MP3 jack. The more performance oriented SE and SL add a sport-tuned suspension, a power driver's seat, wheel-mounted audio controls, and leather and wood accents. The SL adds heated leather front seats, a 9-speaker Bose sound system with 6-CD changer and satellite radio, and xenon headlights and heated leather seats. Most of the features found on the higher-end trims come in bundled packages for the lower trims. Other options include Bluetooth and a navigation system.

The Altima offers plenty to please drivers looking for a safe and solid family sedan. The 2009 Nissan Altima earns five stars in both frontal and side impact crash tests and four stars in rollover tests. All trims come standard with 4-wheel disc and ABS brakes, electronic brakeforce distribution, and dual front-side and side curtain airbags for both rows. Active head restraints and a tire monitor are also part of the package. However, only the V6 trims get traction and stability control, neither of which can be added as an option on the four-cylinder trims. Mirrors with turn signals are standard on the SE and SL, but most owners wish those extended to all trims. To help with blind spots and backing up, a rearview camera is available as an option.

Almost every review by owners of the '09 Altima mentions the convenience of and fascination with the push-button start feature, standard in all but the base trim. The other big hit is the CVT, which most owners find smooth, easy to learn, and well-matched to both engines. Others appreciate the huge trunk, overall styling, and the powerful V6. Complaints focus on the four-cylinder, which can be noisy and intrusive in highway driving when trying to hit the high revs. A small back seat reduces passenger comfort. One of the biggest negatives concerns Nissan's tendency to bundle options and then require that you buy several packages in combination, forcing owners to pay for features they do not want.

The 2009 Nissan Altima has yet to receive reviews from CarGurus drivers, but the nearly identical 2008 version also gets praise for the CVT and push-button start. Other highlights listed include the inline four's fuel economy, cabin space, and the energetic and “zippy” ride. Like many professional reviewers, owners notice the significant understeer and wish the 2.5 offered a bit more power.

Have you driven a 2009 Nissan Altima?
Rank This Car

j asked a 2009 Nissan Altima 2.5 Maintenance & Repair question about a month ago

Hey guys I have a 09 Altima and I tested my Alternator and it tested 13.2 loaded is that normal? Or below normal? Just wondering hopefully I don't have to replace it. Thanks in advance

514 views with 2 answers (last answer about a month ago)

I have a 09 Nissan Altima justed engine swap now when I go to start it the starter just spins the engine does not crank I change the starter not that I don't know why it isn't cranking over or enga...

I turned my a/c on while driving & my car just stopped 1st time ever, what could it be? I need a tune up spark plugs ... HELP"

Nissan 2009 Shut Down When A/c Was Turned On

I turned my a/c on while driving & my car just stopped 1st time ever, what could it be? I need a tune up spark plugs ... HELP"