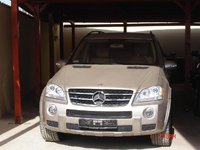 The Mercedes-Benz M-Class SUVs feature exterior and interior updates for 2009, which add a sporty yet classy feel, while the engines provide good performance, especially the new BlueTEC diesel powerplant, which receives raves from reviewers.

One of the biggest knocks on the M-Class is its cost, as prospective owners can find competitive vehicles similarly equipped and offering better base performance at a lower price point.

With their freshened design and new interior components, the M-Class SUVs continue to exhibit many of the features drivers have come to expect from Mercedes-Benz. The ride remains solid, and handling remains agile for an SUV. Fuel economy and pricing, especially the cost of some options, remain the biggest drawbacks for the M-Class, but owners who can pony up the payments are rarely disappointed.

In addition, the diesel-powered ML320 gets a new, next-generation 3.0-liter BlueTEC V6 turbodiesel engine, which features a system that improves emissions by reducing nitrogen oxides in the exhaust stream. As a result, Mercedes will offer the '09 ML320 in all 50 states for the first time.

All '09 M-Class SUVs, including the ML350, ML550, ML63 AMG, and ML320 BlueTEC, now include Neck-Pro head restraints as standard equipment, as well as the Pre-safe occupant protection system, which tightens seat belts, adjusts seats to optimal positions, and closes the windows and sunroof to protect the occupants if the system detects a potential accident. The M-Class also receives an updated COMAND (Cockpit Management and Date) system with a new multimedia head unit, which makes it easier for drivers to control the SUV's audio and video systems, as well as the hand's-free phone calling and navigation systems. Finally, Mercedes offers new wheels for the M-Class SUVs for '09.

The M-Class's gas powerplants, including the 3.5-liter V6 and the 5.5-liter V8, remain essentially unchanged from the previous year, although fuel economy across the line improves slightly, according to Mercedes.

A base 3.5-liter, dual-overhead-cam V6 engine generating 268 hp drives the ML350. The engine features continually variable timing on both the intake and exhaust valves, ensuring peak torque of 258 lb-ft at 2,400 to 5,000 rpm. This results in good acceleration off the mark and immediate throttle response at virtually any driving speed, according to Mercedes. The V6 links to a seven-speed automatic transmission with Touch Shift, which enables drivers to shift manually, and manages 15/20 city/highway mpg.

Stepping up a notch, a 382-hp, 5.5-liter V8 drives the ML550. The V8, which is the same engine that powers the E550 sedan, provides 75 percent of peak torque at just 1,000 rpm, which helps the SUV leap off the mark and dash from 0 to 60 mph in just 5.6 seconds. The lightweight cast aluminum engine was designed for both performance and durability, as well as a smooth delivery of power, according to Mercedes. The V8 engine also links to a seven-speed automatic with Touch Shift, and posts fuel economy numbers of 13/18.

For the top-of-the-line ML63 AMG, a 6.2-liter V8 engine generates 503 hp and a whopping 465 lb-ft of torque at 5,200 rpm. With all that power and torque, the E63 roars from 0 to 60 in just 4.8 seconds. The engine links to a seven-speed AMG 7G-tronic automatic transmission with fingertip shift paddles located on the steering wheel, so drivers can manually shift gears when desired. With its big V8, fuel economy numbers suffer a bit, dropping to 11/15.

Those who prefer a more fuel-efficient Mercedes SUV can opt for the ML320 BlueTEC, with its turbocharged V6 diesel engine, which generates 210 hp. The BlueTech achieves fuel efficiency ratings of 18/24 and can travel up to 600 miles on a single tank of gas. Mercedes designed the BlueTEC diesel engine so it operates without the noise, odor, and smog-causing emissions typical of older diesel engines. The BlueTEC V6 will run on B5 biodiesel fuel as well as diesel fuel, while all gas-powered engines require premium fuel.

All M-Class SUVs come equipped with Mercedes' 4Matic all-wheel-drive system, which includes a four-wheel electronic traction control system. When it detects wheel slippage, the system applies brakes to the wheels with slippage and shifts power to wheels with traction to help drivers maintain control of the vehicle.

All M-Class SUVs ride on an independent front and rear suspension and come equipped with power rack-and-pinion steering. Together with the all-wheel-drive system, the suspension provides a smooth yet firm ride with capable handling on- and off-road. The firm ride results in some bumpiness on rough roads at lower speeds, reviewers note. In addition, the steering can feel slightly unresponsive at times. Some reviewers find the M-Class SUVs too tall and heavy to provide real agility. Overall, though, the M-Class offers a better ride and better handling than many truck-based SUVs, especially in corners. In fact, the M-Class rivals some sedans in its ride and feel, some note.

An optional Airmatic Adaptive Damping System, available on all M-Class SUVs, automatically adjusts air springs based on driving conditions to ensure a balanced, optimal ride. The system also lowers ride height at higher speeds to help improve aerodynamics and fuel efficiency. In addition, the system automatically levels the vehicle to compensate for additional cargo or passenger weight. Drivers can choose from Comfort, Sport, and Automatic settings, although some reviewers find the Sport setting choppy and too firm.

M-Class SUVs with the V8 engines provide impressive and even exhilarating power, while the V6-powered M-Class SUVs perform well under most driving conditions, although they can strain under heavy loads or when climbing hills, according to reviewers. The ML320 BlueTEC in particular receives accolades for its performance and fuel-efficient yet nearly vibration-free diesel engine. In fact, when it comes to performance and operation, many reviewers could not tell the difference between the diesel- and gas-powered M-Class SUVs.

The M-Class seats five passengers in two rows of seating. Mercedes offers no third-row seat for its midsize SUV. While front passengers will find plenty of head- and legroom, taller passengers in the backseat might feel cramped, with limited legroom. For long trips or everday use, the M-Class offers plenty of interior storage bins and cubbies, including four cupholders (two in the front and two in the rear) and storage bins in the center front console, in addition to the cargo area behind the second-row seats. 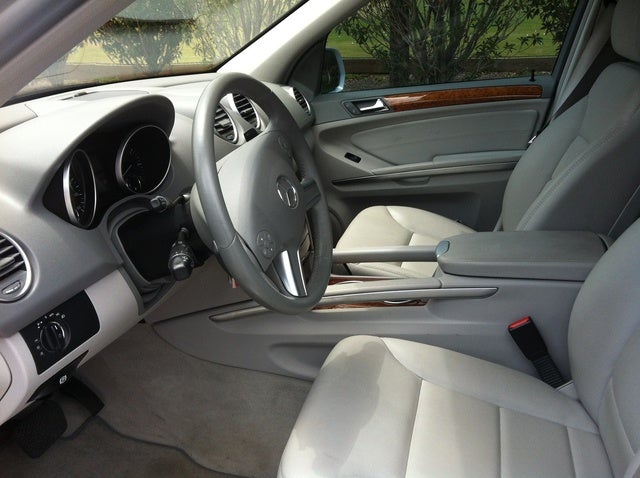 All trims also come equipped with dual-zone automatic climate control, a power sunshade for the roof, and an eight-speaker audio system with speed-sensitive volume, a six-disc in-dash CD changer, and an MP3 input jack. The ML63 adds an 11-speaker, 610-watt audio system with a six-month subscription to Sirius satellite radio. The ML63 also comes standard with the updated COMAND entertainment control system and navigation system, which is available as an option on the other trims.

The ML63 includes a number of additional features designed by AMG, the in-house sport tuner for Mercedes. AMG sport seats, an AMG-designed ergonomic sport steering wheel, brushed stainless steel sports pedals with black rubber pads, and an AMG instrument cluster all come standard. The ML63 also comes with heated front seats and the Parktronic front and rear electronic parking aid with a camera. Both features are available as options on the other three trims.

The M-Class SUVs offer a generous 29.4 cubic feet of cargo space behind the rear seats. With the second row folded flat, cargo space expands to 72.4 cubic feet. The rear seat features a 60/40 split for added flexibility. A power liftgate makes it easy to load and unload cargo.

The M-Class comes well-equipped with safety equipment and scored well in crash tests conducted by the National Highway Traffic Safety Administration, achieving a five-star rating, the highest possible, for protecting all occupants in the event of frontal or side-impact crashes.

All trims include a full range for airbags, including dual-stage front airbags and side head curtain airbags. Other standard safety features include antilock brakes and a night security illumination system. In addition, M-Class trims come equipped with a trailer stability assist system. The Electronic Stability Program monitors the SUVs for oscillations caused by a trailer´s movement, and applies the brakes as necessary to stabilize the vehicle.

Owners like the way the M-Class SUVs drive and give them good marks for their attractive looks, solid ride, and quiet, comfortable cabin. Owners also like the M-Class' handling and safety features, although some find the M-Class heavy for a midsize SUV. Most like the seven-speed shifter, although some owners find fault with the placement of certain controls, such as the cruise control and turn signal stalk. Some also find the steering overly sensitive. Fuel economy gets mixed comments. Some are satisfied with gas mileage, and others find it inadequate. The biggest knock on the M-Class concerns its price, especially with added options. Some owners have actually decided against some options, such as the navigation system, due to their high cost. In addition, some find the interior controls overly complicated.

What's your take on the 2009 Mercedes-Benz M-Class?

Have you driven a 2009 Mercedes-Benz M-Class?
Rank This Car

I'm curious to know if I must arrange for insurance for a vehicle I plan on financing, before I am able to leave the lot? The state I am purchasing the vehicle from doesn't require insurance coverag...

14 views with 5 answers (last answer about a year ago)