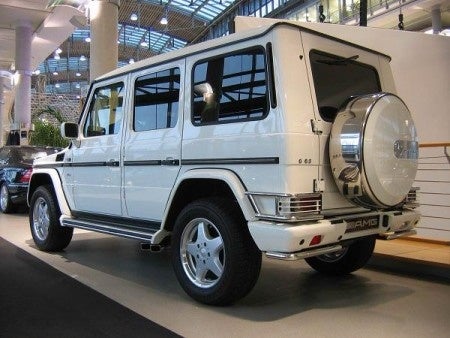 The Mercedes-Benz G-Class receives a bump in power for 2009 and a change in nomenclature, as the G500 morphs into the G550, reflecting its new, more powerful engine. In addition, the G-Class receives a new three-bar polished chrome grille, which melds nicely with the rest of the G-Class's rugged look. Other than that, the G-Class changes little for 2009. Nearing its 30th year in production, it retains its straight-up, squarish, classic design, which has appealed to off-road adventurers for decades. It also retains its extensive off-road capabilities, as well as a long list of standard luxury-oriented features sure to make spirited off-roading just a little more pleasurable.

The German automaker offers two G-Class trims for 2009. The rebadged G550 comes equipped with a new 5.5-liter, double-overhead-cam V8 engine, which produces 382 hp, an increase of 90 hp over the previous year's 5.0-liter, 292-hp V8. The V8 produces 391 lb-ft of torque, with 75 percent of peak torque available at just 1,000 RPM, resulting in impressive low-end acceleration. The engine links to a seven-speed automatic transmission with closely spaced gears, ensuring smooth acceleration and better overall response, as well as improved fuel efficiency on the highway, according to Mercedes. The transmission includes the Touch Shift feature, which enables drivers to manually downshift or upshift by tapping the shift lever left or right.

The sportier and more powerful G55 AMG also receives a bump in power, thanks to its hand-built, supercharged 5.5-liter V8 engine, which now produces 500 hp, up from 493 hp the previous year. The engine generates a whopping 516 lb-ft of torque at 6,100 RPM. Standard features for the G55 AMG include "designo" leather upholstery, designo wood trim on the dashboard and steering wheel, a multicontour driver's seat, an AMG-designed instrument cluster, a sport suspension, and styling cues designed by AMG, Mercedes' in-house sport tuner.

To ensure its off-road ruggedness, the G-Class includes a four-wheel-drive system with front, rear, and center locking differentials, all activated by the driver, making it one of only a few SUVs available with three locking differentials. Antilock brakes, a four-wheel Electronic Traction System, and an Electronic Stability Program also come standard on the 2009 G-Class trims.

What's your take on the 2009 Mercedes-Benz G-Class?

Have you driven a 2009 Mercedes-Benz G-Class?
Rank This Car

How Do I Report A Fraudulent Listing On Your Site?

There are two G class mercedes listed in bentonville AR right now that were listed in Murfreesboro Last week. The con is these guys are hacking into dealership listings and listing their cars and tr...