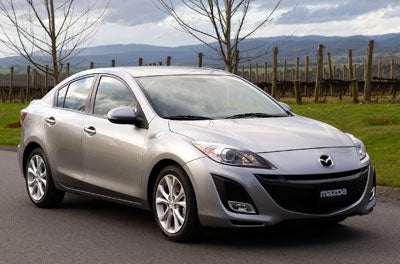 Combining the practicality of good fuel economy and spacious storage with sporty driving dynamics, the 2009 MAZDA3 packs plenty of fun and excitement into an economy compact.

Its fuel efficiency and safety ratings still fall below the rest of the cars in its class, and the 2009 MAZDA3 would benefit from a stronger engine with better off-the-line acceleration. 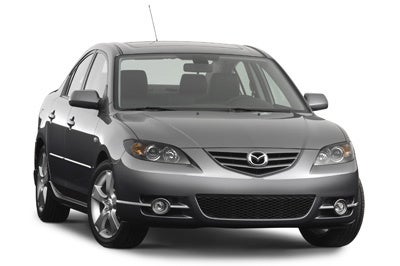 It feels like an understatement to call the 2009 MAZDA3 fun, but somehow this compact blends sporty dynamics and nimble handling with affordability and good fuel economy. The MAZDA3 seems to offer the best of both worlds, filling its role admirably as an economy commuter car while allowing drivers to let loose behind the wheel and enjoy the ride. Its improved performance and the availability of both a sedan and hatchback justify its more expensive pricetag when compared to the Civic or Corolla.

Mazda's smallest car, the 2009 MAZDA3 continues to rise in popularity, with awards piling up and sales increasing every year. Winner of the 2008 Motor Trend Economy Car Competition, this front-wheel-drive compact suggests you can have an affordable car without sacrificing driving excitement. It surpasses the competition in terms of power and sportiness and offers the most driver-connected handling in its class.

For 2009, the MAZDA3 makes few changes. The base i Sport gets standard ABS brakes and side curtain airbags for both rows, while a remote trunk release on the key fob gets added to the sedan's equipment list. The '09 MAZDA3 comes in sedan and hatchback form, with two engine choices designated by the i and s badges. Sedans are available in i Sport, i Touring, s Sport, s Touring, and s Grand Touring, with the hatchbacks offered only with the s designation. The s stands for a sportier ride and suspension, with add-ons such as larger 16- and 17-inch wheels, foglights, body sills, and unique front and rear fascias. These trims also house a more powerful engine than the i trims.

Aside from the base i Sport, the entire lineup comes well-equipped with standard power features, leather trim, and nice options like a Bose sound system. Although slightly smaller than the Civic on the inside, the cabin feels roomy and comfortable, and the MAZDA3 has the advantage over the Civic by offering a practical and versatile hatchback option. These 5-door models exhibit functionality along with a stylish and sexy look.

The '09 MAZDA3 cannot match the Civic or Corolla for fuel economy or safety, but it sets its sights on drivers looking for something more than just an economy car, and it delivers on sporty handling and performance. Clearly, Mazda doesn't think that the practicality of an affordable fuel-efficient compact rules out having a little fun when the work day is done and the family's in bed. 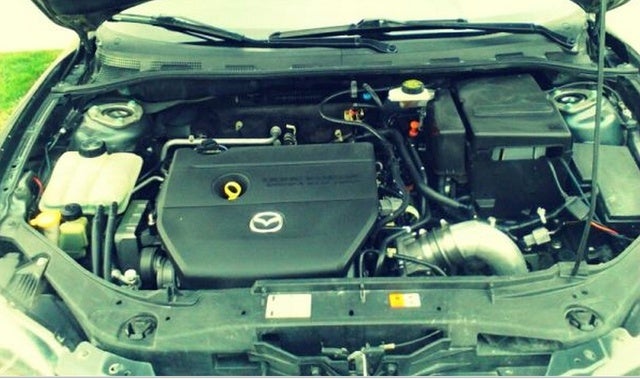 The '09 MAZDA3 offers two engines. The i sedans carry a 2.0-liter, 148-hp inline-four engine that puts out 135 lb-ft of torque. It gets paired with either a 5-speed manual or 4-speed automatic, with 0-60 times just under 10 seconds. Fuel economy averages 24/32 mpg. Powering the s sedans and hatchbacks is a 2.3-liter, 156-hp inline four, delivering 150 lb-ft of torque. It also comes with the 5-speed manual, but adds a 5-speed automatic to its options. Zero to 60 times average a respectable 8.6 seconds, with fuel economy dipping to 22/29 mpg.

Obviously, the 2.3 proves the better performer in terms of acceleration and passing on the highway, but the 2.0 provides sufficient power for an everyday driver who will use their MAZDA3 mainly as a city or commuter car. When moved to the highway, however, the 2.0 complains noisily when pushed. Both engines feature transmissions with smooth and quick transitions, although the manual would benefit from a short-throw shifter.

Drivers and professional critics agree that the '09 MAZDA3 exhibits some of the best driving dynamics in the compact class segment, giving it labels such as “fun” and “sporty” - words not often used to describe an economy car. Where the i trims feel best suited for more sedate and practical city driving, the s trims should satisfy those who like to let loose a little on weekends. The MAZDA3 rides on a fully independent Macpherson strut front and multilink rear suspension. Performance tuning in the s trims, along with larger 16- and 17-inch wheels make the MAZDA3 feel right at home on winding back roads, and the 2.3 engine feels peppy and energetic.

The sport-tuning does translate into a firmer suspension on the s trims, but most critics agree the ride never becomes too harsh or uncomfortable, even on long trips. Steering feels nicely weighted and tight, with good driver feedback and communication. The athletic compact achieves a small turning radius and good cornering, thanks to its size, yet remains solid and in control thanks to a long wheelbase and wide stance. Test drives from 2008 reveal responsive brakes.

The '09 MAZDA3 stretches 177.4 inches long, with a generous-sized wheelbase that not only improves handling, but expands cabin space. As with many compacts, the front-seat leg- and headroom far exceed that in the back seats, and rear passengers over 6 feet tall will likely feel cramped. The hatchback cuts off another inch of cabin space. Legroom ranges from 41 inches up front to 36.7 in the back.

Rear seats in both the sedan and hatch split-fold flat 60/40. The sedan's trunk is rather small for a compact, coming in at 11.4 cubic feet, so the hatchback works better for those needing more storage. It starts out at 17 cubic feet but expands to a spacious 44. It features an underfloor storage compartment. Owners love its versatility and deceptive storage capacity. A hydraulic liftgate opens smoothly, and the low and wide opening eases loading. One reviewer complains about the hatch handle, which can cause one's hand to scrape against the rear bumper. A large glovebox, door pockets, and a center console with covered cupholders provide added interior convenience.

The recessed controls and gauges are easy to read and well laid out, in easy reach of the driver. All the s trims feature electroluminescent lighting. Standard tilt and telescopic steering and manual height adjustment on the front seats aid driver comfort, but you'll have to get the top-line s Grand Touring to benefit from a power driver's seat, a feature that many owners wish was available on the i trims.

Many professional reviewers find the cabin materials of a high quality, besting many in its class, although a few test drives notice some rattling in the dash. While it's no luxury car, all trims but the base offer an impressive array of standard features. Even the i Sport, although it lacks air-conditioning, comes equipped with a CD/MP3 player and wheel-mounted audio controls. The i Touring adds power accessories, remote entry, cruise control, and leather trim. The sportier s trims, in both hatch and sedan form add more style than substance, particularly on the exterior (body-colored moldings, distinctive fascias, side sills), but the s Grand Touring features automatic climate control, heated front seats, and leather upholstery. Available only for this trim are a Bose sound system, remote start, and a navigation system. Other options include a 6-CD player and sunroof.

For 2009, the base i Sport joins the rest of the '09 MAZDA3 lineup in offering standard four-wheel ABS brakes and dual front-side and side curtain airbags for both rows. So equipped, both the hatch and sedan earn four stars in frontal impact crash tests and a Good rating from the Insurance Institute. Side impacts, however, earn a disappointing three stars, falling behind most of the MAZDA3's competitors. Moving up to the s Touring and Grand Touring gets you traction and stability control. A standard tire monitor measures pressure.

Plan to have a lot of fun behind the wheel, if you believe the overwhelmingly positive comments from owners of the 2009 MAZDA3. Calling it the best bang for your buck, drivers give high marks to the sporty handling and responsive steering and styling points as well as to the sleek and sexy exterior appearance of their fuel-efficient compact. Drivers also like the long list of standard features as well as the optional Bose sound system. A comfortable and modern-looking interior and the expansive cargo room in the hatch also earn raves. Owners marvel that you can have an economy car without missing out on driving excitement.

On the flip side, despite positive comments on the MAZDA3's acceleration, owners do wish it packed a little more power. Other complaints mention the firm suspension which can feel harsh on long rides, the lack of a power seat option on the i trims, and a complex trip computer that's hard to work.

There are no comments about the 2009 MAZDA3 from CarGurus owners yet, but you can get a good idea by looking at reviews of the 2008 model, which varies little from the current one. Similar to those mentioned above, positive remarks mention the fast and fun handling, smooth ride, cool looks, responsive brakes, and confident acceleration. One owner claims the MAZDA3 offers the best driver feedback of any compact car on the market. Some drivers want a power boost and gas mileage more in line with the Honda Civic's. Another common complaint points out the lightweight and easily dented body parts being a worry in the case of an accident.

Users ranked 2009 Mazda MAZDA3 against other cars which they drove/owned. Each ranking was based on 9 categories. Here is the summary of top rankings.

Have you driven a 2009 Mazda MAZDA3?
Rank This Car

122 views with 4 answers (last answer about a year ago)

Is there anyway that Transmission Fluid can get into the cylinders?? My transmission fluid level dropped significantly with no signs at all of leakage. The other strange thing is that a large puf...

I have a 2009 Mazda 3 that I need to replace the battery in every 2 years. I am buying the best battery on the market, but every 2 years, always in the winter, the battery just fails. Then I replace i...

8 weeks ago after a batch of dirty fuel my car has never been the same. The tank wasnt flushed but fuel run as low as possible before putting fuel in it again. Last week it started losing accelerat...

I can set my clock to the correct hour, no problem - but I can't for the life of me figure out how to switch between 12 and 24-hour format. I KNOW it has a 24-hr format, because that's what it was in ...