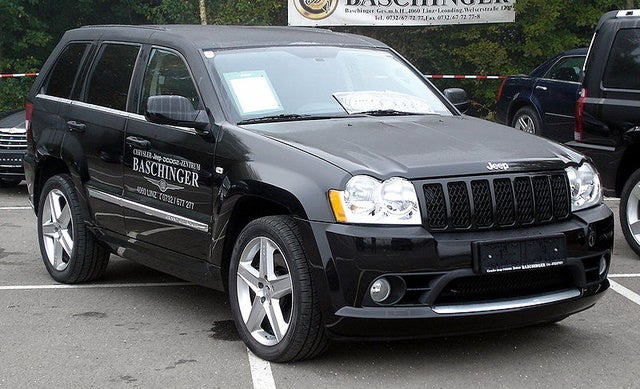 The 2009 Jeep Grand Cherokee remains one of the most capable off-road (and on-pavement) midsize SUVs available today, with a wide range of engine options, a comfortably upscale cabin, a classic yet contemporary exterior design, and three different four-wheel-drive systems designed for solid performance, no matter where the road leads.

The '09 Grand Cherokee's cabin and cargo space seem cramped compared to the more spacious interiors offered by some competitive SUVs, and many owners would like to see better fuel economy from the Grand Cherokee's range of engines. 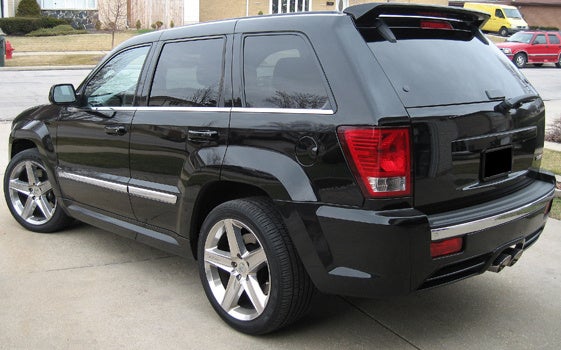 The 2009 Grand Cherokee continues to live up to its legendary status as a solid, comfortable, and safe SUV, and remains a popular choice for adventuring families who like to leave behind the paved roads of civilization as often as possible. A new Hemi V8 provides Class IV towing capacity, the best in its class, making the Grand Cherokee a good option for drivers who regularly tow boats or trailers. While the Grand Cherokee has its drawbacks, including cabin size, cargo capacity, and fuel economy, most will find it a well-equipped, capable performer.

The Grand Cherokee cranks up the power for 2009, thanks to a new 5.7-liter V8 Hemi engine, which now generates an impressive 357 hp, an increase of 27 hp over last year's V8. The new Hemi joins four other Grand Cherokee engines, including a turbodiesel and a flex-fuel V8 (both updated last year), as well as a monstrous 6.1-liter Hemi V8, which practically requires its own zip code (and dedicated fueling station). The Grand Cherokee remains the only SUV available today with a choice of five engines, giving potential buyers plenty to look at and consider when visiting showrooms.

A true off-road SUV, the '09 Grand Cherokee features a new two-piece lower front fascia. When heading off-road, drivers can remove the lower front piece, which results in additional clearance. The Grand Cherokee retains its signature seven-slot grille and round headlights, as well as its aerodynamically sloped windshield, trapezoidal wheel openings, and squarish rear end, all of which give the Grand Cherokee a contemporary appearance while retaining some of its classic design elements.

The 2009 Grand Cherokee comes in base Laredo, midrange Limited, high-end Overland, and high-performance SRT8 trims. All come with either rear-wheel or four-wheel drive, except the SRT8, available only with a four-wheel-drive configuration. Jeep offers three different types of four-wheel-drive systems on the Grand Cherokee, including the Quadra-Trac I and II and the Quadra-Drive II, depending on the trim. 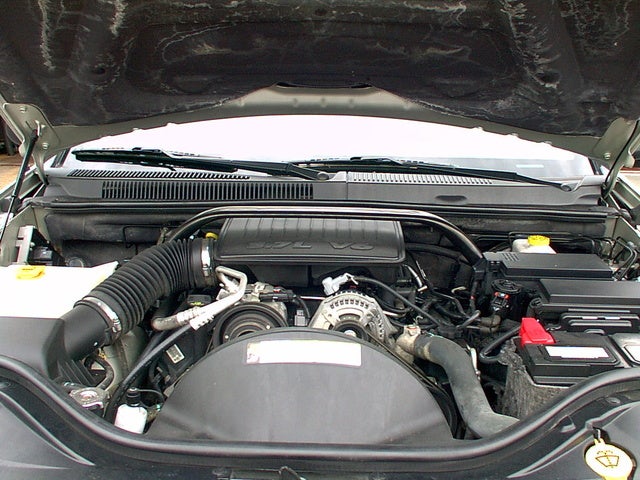 Each of the Grand Cherokee's trims comes with a standard engine, and some trims are available with optional engines. At the entry-level position, a 210-hp, 3.7-liter V6 engine powers the base Laredo trim, although drivers can upgrade to a 4.7-liter FlexFuel V8. Stepping up a notch, the midlevel Limited comes equipped with the 4.7-liter FlexFuel V8 as its standard powerplant. This engine runs on either regular unleaded or E85 ethanol fuel and delivers 305 hp and 334 lb-ft of torque.

Next up the line, the Overland trim receives the new 5.7-liter Hemi V8 as its standard powerplant. The 5.7-liter V8, which is available as an option on the Limited trim, was redesigned to provide not only more horsepower but better fuel economy as well, thanks to variable valve timing, which improves engine breathing. In addition, a fuel-saver feature deactivates four cylinders when power demand levels off, reducing fuel usage. The new V8 runs on regular unleaded fuel, and delivers a towing capacity of 7,400 pounds, the best in its class. (Towing capacity starts at 3,500 pounds for the Laredo and ranges up from there, depending on the trim.)

The performance-oriented SRT8 trim comes equipped only with the big 6.1-liter Hemi V8, which definitely differentiates it from the other Grand Cherokee trims. The big V8 produces 420 lb-ft of torque, enough to drive the Grand Cherokee from 0 to 60 in under five seconds, turning the SUV into a rocket. All engines link to a five-speed automatic transmission except the new 5.7-liter V8, which mates to a multi-speed automatic transmission designed for optimum efficiency and manual as well as automatic shifting.

Drivers can also opt for a 3.0-liter turbodiesel V6 engine, although reports indicate it will be a different V6 diesel than the one offered in 2008 (a Cummins diesel as opposed to 2008's Mercedes-built diesel). It should be available on the Limited and Overland trims.

Just like the engines, the Grand Cherokee's four-wheel-drive systems differ by trim. The Laredo comes equipped with the full-time Quadra-Trac I, which features a single-speed transfer case and a new traction control system. The Limited receives the full-time Quadra-Trac II, which includes a two-speed transfer case and the new traction control system. The Overland gets the Quadra-Drive II system, which provides a full-time transfer case and electronic limited slip differentials on both axles, as well as low-range and neutral modes. The SRT8 uses the Quadra-Trac on-demand system, which drives the rear driveshaft and engages the front driveshaft when needed. The SRT8's four-wheel-drive system does not offer low-range gearing.

The Grand Cherokee sits on a car-like platform, which provides a smooth, comfortable ride and agile handling, both on pavement and off-road. The SUV's suspension does a good job of damping the bumps and rough spots of roads, so occupants feel very little harshness inside the cabin. At higher speeds, however, the Grand Cherokee does tend to float through dips and low spots in the road, and some drivers and reviewers note a bit of body roll and lean in tight curves. Overall, though, the Grand Cherokee feels tight and solid. Steering is quick but not overly precise, reviewers note.

While the Grand Cherokee offers a comfortable interior, many find the rear seats too firm for long-term comfort. In addition, many complain about tight legroom in the back seat, especially when occupied by three adults. Many also find headroom tight for taller adults.

Interior storage compartments include bins and cubbies in the center console, glove box, and doors, as well as a driver's side storage cubbie located below and to the left of the steering wheel. 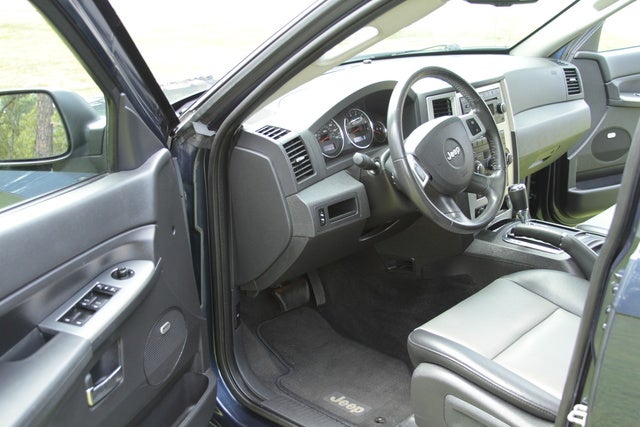 The 2009 Cherokee seats up to five in two rows, with 60/40 split-folding rear seats. Overall, the Grand Cherokee's cabin offers less room than the interiors of some competing SUVs, such as the Ford Explorer and Toyota 4Runner. Some drivers and reviewers note a definite cramped feeling inside, especially for an SUV that looks larger on the outside. However, most agree that the Grand Cherokee's cabin makes good use of high-quality materials and components, with a soft-touch padded dash and interior surfaces, a two-tone instrument panel (with a darker upper portion designed to reduce sun glare), and an overall appearance that doesn't look cheap or plasticky.

Standard features for the Laredo include an eight-way power-adjustable driver's seat, steering-wheel-mounted audio controls, and a six-speaker audio system with an in-dash CD player, an MP3 input jack, and Sirius satellite radio. The Limited and SRT8 add a four-way power-adjustable passenger's seat, a leather-wrapped steering wheel, and a 276-watt Boston Acoustics audio system with a six-disc in-dash DVD changer. The Overland adds second-row heated seats, a wood and leather-wrapped steering wheel, and memory for the driver's seat.

Many drivers and reviewers note the limited cargo space in the Grand Cherokee, when compared to competing SUVs. However, for everyday use, most drivers will find cargo space adequate. With the rear seats up, the Grand Cherokee offers 34.5 cubic feet of cargo space, which expands to 68.5 cubic feet with the rear seats folded down. The cargo area also comes with a reversible storage tray in the cargo-area floor, a cargo compartment cover, and cargo tie-downs. 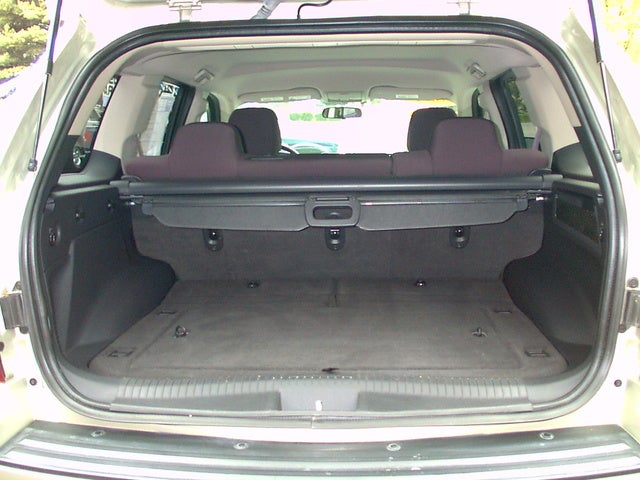 The 2009 Cherokee received a five-star safety rating in front and side impact tests from the National Highway Traffic Safety Administration. However, it achieved only a three-star rating in rollover tests.

Standard safety features include dual front-side and side curtain airbags for both rows, four-wheel antilock brakes, and an Electronic Stability Program. In addition, the Limited and Overland trims with four-wheel drive come equipped with Hill Assist, which keeps the Grand Cherokee from rolling backward when starting from a full stop on an incline, and Hill Descent, which ensures a smooth and controlled descent on rough or slippery terrain.

Owners, especially those with families, find the '09 Grand Cherokee comfortable, capable, and fun to drive. It's especially popular with households who need space and comfort for family trips, as well as adventuring drivers who need a solid off-roader. Overall, owners like the Grand Cherokee's interior comfort, ergonomics, and car-like handling. The SRT8 with its big Hemi also proves popular with some drivers, although many would like to see better gas mileage. The Grand Cherokee also gets good marks for its rugged exterior styling, reliability, and value.

On the downside, some find fault with the Grand Cherokee's small cabin and consider the ride somewhat noisy and occasionally harsh at higher speeds.

Similarly, CarGurus drivers find the Grand Cherokee fun to drive, although many would like to see better gas mileage. Many like the diesel engine, which they call quiet, powerful, and economical. Many also like the powerful SRT8, although some note it's not economical for long trips.

What's your take on the 2009 Jeep Grand Cherokee?

Users ranked 2009 Jeep Grand Cherokee against other cars which they drove/owned. Each ranking was based on 9 categories. Here is the summary of top rankings.

Have you driven a 2009 Jeep Grand Cherokee?
Rank This Car

Jeep won’t start, no clicking, nothing. But do have power, lights, etc. Brand new battery, fuses are all good. Going to try the ignition switch. Do I need to buy a new key too, since it’s remote s...

Can I Change The Battery Myself In A 2009 Jeep Grand Cherokee?

Can i change the battery myself in a 2009 Jeep Grand Cherokee? Do I need to remove the radio fuse first and will i need a radio code?

I have a 2009 Jeep Grand Cherokee with a p0303 code. I tested the compression in the 3rd cylinder and it’s reading zero. What’s my next step? Could it be a stuck valve?

Car has power all accessories functioning, but doesn't start. Turn key & nothing happens (doesn't turn over at all). Happened several times in past few days but keep turning key & would start after s...