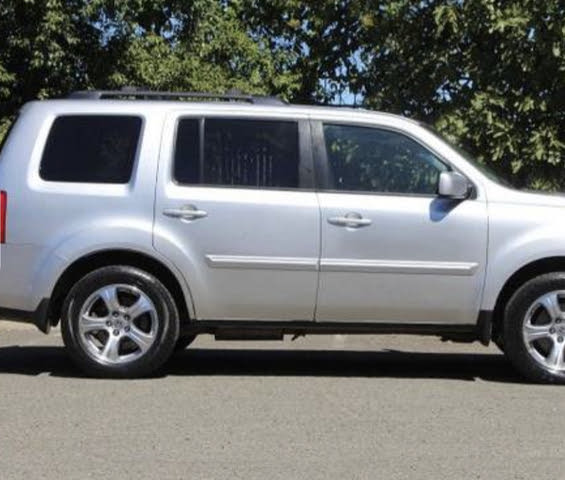 Abundant cargo and passenger space, an upgrade in horsepower, and a sturdier frame give the 2009 Honda Pilot an attractive blend of SUV utility with true car-like handling and comfort.

Despite engine adjustments to improve fuel efficiency, the 2009 Pilot still fares as badly in mpg ratings as other SUVs.

Honda has redesigned the '09 Pilot to provide both the rugged looks and utility of an SUV, with the versatile cargo space and upscale comfort to accommodate a family's every need. Its superior maneuverability stands out from the pack in the SUV's primary habitat, both city and suburban streets and parking lots. Upgrades to the interior and a longer list of standard luxury features make the Pilot a good buy for the money, but those seeking more high-end refinement may be disappointed by the continued use of low-grade hard plastic in the cabin.

In reality, SUV should stand for Suburban, rather than Sport, Utility Vehicle, as its target audience tends to be young families needing the space and utility to tote everything from kids to groceries to soccer gear to home improvement supplies. Honda has kept this audience firmly in mind, listening to past complaints and suggestions and emerging with an '09 Pilot redesigned as a more high-end, yet practical SUV that offers top-notch family comfort and utility.

Offered in both front- and all-wheel drive, the midsize '09 Pilot returns to its SUV roots by bulking up its exterior with a higher hood line, tall oversize grille, and larger 17-inch wheels. On the inside, it revamps its dash and steering column and adds more standard features to all but the base LX. The extra inches on the outside translate to more interior passenger room in all three rows, accommodating up to eight people overall.

In a market where SUVs have fallen out of favor due to rising gas prices, many automakers must rethink and repackage these family haulers to stay competitive on the road. The '09 Pilot represents a significant improvement over the 2008 model, adding more customer-oriented features and expanding its SUV capabilities while refining its easy car-like driveability. More important, Honda does all this while maintaining its solid reputation for safety and durability, which remain primary considerations when looking for any family car. 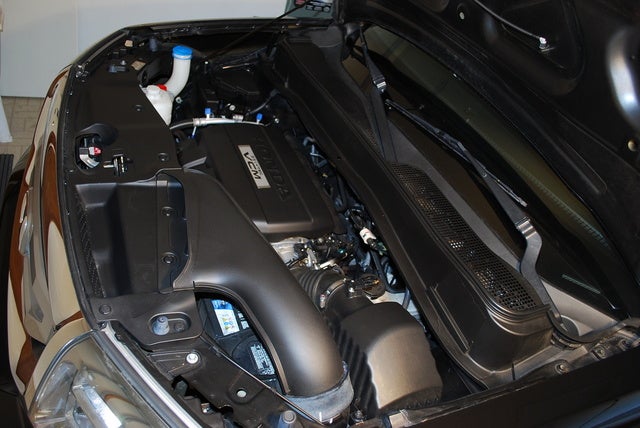 A new engine sits in the '09 Pilot, borrowed from the Accord sedan. This single-overhead-cam 3.5-liter i-VTEC V6 delivers 250 hp and 253 lb-ft of torque (up 6 and 13 respectively from last year), and comes paired with an electronically controlled 5-speed automatic transmission. Though torque peaks at 4,500 RPM, variable valve timing spreads it out over the 2,000-6,000 range. Some drivers have expressed a wish for better acceleration power or a V8 option, but the more-than-sufficient V6 is capable of towing as much as 4,500 pounds with the standard tow hitch. It also meets tough ULEV-II emissions standards.

Equipped with variable valve timing and variable cylinder management, the new Pilot ups fuel economy ratings from last year by one point to 17/23 mpg in front-wheel drive trims and 16/22 in all-wheel drive ones. Variable cylinder management can deactivate two or three cylinders when they're not needed, such as during idling or highway driving. In actual fact this only modestly improves fuel economy, but in theory the system proves to be a big attraction to potential Pilot owners who want a roomy SUV but don't want to pay for it at the gas pump. The deactivation process seems to work invisibly to most drivers, who can chart its activity by an ECO light on the dash.

Many automakers advertise SUVs that drive like a car, but the '09 Pilot seems to actually deliver on this promise. Despite gaining 3 inches in length and wheelbase and 1 inch in width and height, the extra pounds barely intrude on its smooth and tight handling, aside from some minor body lean. Give credit to the Macpherson strut front and multilink rear suspension, which has been retuned and given aluminum parts to lighten the Pilot.

Also new for 2009, the Pilot uses high-strength steel in 52% of its body, the most in any Honda, increasing torsional rigidity. The result, and by far the biggest praise heaped onto the new Pilot, is a tiny turning radius more similar to that of a sedan than a truck-like SUV. This improved maneuverability raises the attraction factor for those who use their SUVs mainly to frequent shopping-mall and grocery-store parking lots.

The Pilot comes with either front-wheel or automatic all-wheel drive. The all-weather AWD system lacks low-range gearing for off-road performance, but adds extra insurance and surefootedness in both soft-road situations and slippery and snowy conditions. It features variable torque management (VTM-4), which acts as a locking rear differential, sending up to 70% of torque to the rear wheels.

Test drives of the '09 Pilot reveal a more solid vehicle than the Pilots of old, with dynamic driving performance characterized by precise steering and responsive brakes. Some noticeable understeer and minimal body roll in turns prevent this SUV from matching the sportier pretensions of a Mazda CX-9. Bump absorption remains good, despite a stiffer suspension, and the larger 17-inch wheels provide firmer road grip without contributing increased road noise. The cabin remains relatively quiet, thanks to the Active Control Engine Mount and increased damping, which reduce noise and vibration.

Returning to a boxier form and adding inches to its length, width, and height give the Pilot a much more roomy and comfortable cabin. Realistically seating seven in three rows, adults over 6 feet have plenty of headroom no matter where they sit. The 60/40 split-folding second row fits three comfortably and comes equipped with LATCH anchors for three child seats. The second row reclines, slides forward and back 3 inches for easier third-row access, and adds an inch of legroom (for a total of 38), while the third row gains nearly 2 inches of legroom. A higher ride height in the back row lets passengers stretch their legs, but although adults easily fit back there, kids will be more comfortable on longer rides.

With both rows up, the '09 Pilot features a class-leading 20.8 cubic feet of cargo space. Expanding to 47.7 and 87 cubic feet when each respective row folds flat, Honda boasts that the Pilot mimics a pickup's capacity to carry 4x8 sheets of plywood. A 2.8-cubic-foot underfloor storage space and a standard cargo net add more versatility. A roof rack is also standard, but several owners wished for standard crossbars as well. Interior storage compartments abound and astound, with 12 cupholders and various pockets and bins scattered throughout the cabin. Only the tiny glove compartment mars an otherwise good use of space. A redesigned center console features oversize cupholders, multiple bins, two 12-volt power points, and a USB port for iPod connections. The Touring adds a 115-volt power source.

Front row passengers get 41 inches of legroom and an extra inch of sliding seat movement to accommodate longer legs. For driver comfort, tilt and telescopic steering is now standard on all trims, and the shifter has moved from the steering column to the dash. A power driver's seat has been added to the EX trim, making it standard on all trims but the base LX. New LED lights illuminate the dash gauges, and a new center stack piles on the buttons and controls. Most reviewers and many owners find this stack overloaded and difficult to master at first, particularly when equipped with the complicated navigation system.

While the LX features dual-zone climate control, all other trims offer tri-zone controls in each of the three rows. The upgraded system also features an automatic humidity control to prevent interior fogging. Other upgrades to the '09 Pilot include a new MP3 input jack and the capability of holding four infant seats in the rear rows (three in the second, one in the back).

Base LX trims won't leave drivers dissatisfied, offering up full power features, a trip computer, a CD/MP3 player, and cruise control. The EX adds a new 8-way power driver's seat, foglights, and a 6-CD changer with satellite radio. One of the more popular choices, the EX-L features leather upholstery, a power passenger seat, and sunroof. The Touring loads up on everything left in the Honda stable, most of which is optional for the other trims. This includes the navigation system, a rear seat DVD player, power liftgate, Bluetooth, and rear parking sensors.

Overall, the improvements to the '09 Pilot cabin represent a significant upgrade from the 2008 model. Owners and critics find it roomy, spacious, comfortable, and flexible, with all the requisite SUV storage utility. The Touring's abundant list of features sway many owners to pick the Pilot over the less-loaded and comparably priced Toyota Highlander. The only major complaints focus on the busy center stack and the use of cheap-looking hard plastic materials.

Honda always rates highly in crash tests, and will probably do so with the '09 Pilot, which has not yet been rated. All of the standard safety equipment returns, with the addition of larger ABS brakes and Hill Start Assist, which helps mitigate rollbacks. The use of high strength steel in 52% of body parts (up from 13% last year) increases overall rigidity to help lessen crash impact damage, along with Honda's Advanced Compatibility Engineering, which spreads crash impact over a wider area, thereby dissipating its effect.

Standard on all '09 Pilot trims are traction and stability control, ABS brakes, 17-inch wheels, a tire monitor, and automatic headlights. Passengers can feel secure with active front head restraints, dual-stage dual front and front-side airbags, and side curtain airbags for all three rows. A rearview camera comes with both EX-L and Touring trims, and drivers say this helps combat the poor visibility caused by thick C pillars.

New owners of the redesigned '09 Pilot have nothing but praise for this roomy, car-like SUV that combines the comfort they desire with more utilitarian towing power and AWD confidence. The highest marks go to the turning radius, easy maneuverability, and smooth ride, with added mention going to the abundant passenger and cargo space, the must-have rearview camera, and the inclusion of a standard tow hitch. Drivers also like Honda's reputation for reliability and durability, along with its good resale value.

The most glaring complaints focus on the Pilot's poor fuel economy numbers, which drivers expected to be higher in a Honda. Many owners are disappointed with the small glovebox, barely able to hold the owner's manual, and the use of cheap plastic materials in an otherwise upscale cabin. The fact that most options are available only as bundled packages also frustrates owners.

Connie Me and my husband is going out tomorrow to try and find us a nice SUV, Honda CRV, Nissan Pathfinder, Jeep Compass Along this line.

Users ranked 2009 Honda Pilot against other cars which they drove/owned. Each ranking was based on 9 categories. Here is the summary of top rankings.

Have you driven a 2009 Honda Pilot?
Rank This Car

can you drive 2009 honda pilot when the D is flashing in dash?

Why Is My Check Engine Light And VTM-4 Light Coming On When My Car Gets Wet...

I have a 2009 Honda Pilot EX-L 4WD. I've noticed that when it rains or snows my check engine and VTM-4 light comes on. In about a day or so they both will go away? What could this be???

How To Copy A Cd For Navigation In Honda Pilot

Any alternative for navigation than ordering a new cd

How Long Does The Direct Deposit Payment Take To Go Through

If my prospect agrees to buy the car after their test drive, is it possible for them to make the payment online on Cargurus right after the test drive? Will it show up online right away?

Do you do trade ins?