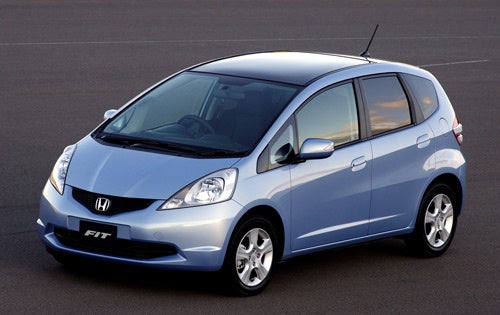 With outstanding SUV-like cargo capacity and subcompact fuel efficiency, the '09 Honda Fit boasts an expansive interior in a stylish and fun-to-drive package.

The lack of standard traction and stability control seems a glaring oversight for a Honda vehicle, and the '09 Fit's pricetag far exceeds that of other subcompacts.

The '09 Fit makes converts of drivers incredulous that a subcompact hatch can actually be roomy. It accommodates families on a budget looking for great passenger and cargo space in combination with superior fuel economy. But its crisp and nimble handling will also appeal to economy-minded drivers wanting sporty driving dynamics as well as a good mileage rating.

Honda might not want to admit it, but the 2009 Fit makes the perfect clown car. Its subcompact exterior hides a spacious and roomy interior, with comfortable head-, elbow, and legroom for passengers and class-leading cargo capacity. Named by Car and Driver as one of its 10 Best for both 2007 and 2008, the third-generation Fit arrives in 2009 completely overhauled, with an emphasis on personal comfort and optimizing space.

The front-wheel-drive five-door hatchback still comes in either base Fit or Fit Sport, but adds a new Sport with Navigation trim that also includes standard traction and stability control, not available on the other trims. The Fit also increases in size, adding 4 inches in length, 2 to the wheelbase, and a half-inch to the width for even better cargo room, and pushes out the front A pillars for improved visibility. These increased dimensions add only 44 pounds to the Fit's weight, however, due to the use of high-strength steel, which adds 162% more rigidity for better safety.

Other changes include a revised dash and a Civic Si steering wheel that adjusts fore and aft and tilts and telescopes. Rear doors have widened for better access, while the rear hatch gets larger and lower for easier loading. The folding rear seats now go flat at the press of a button, no longer requiring headrest removal, and they also get an underseat lockable storage compartment. Tweaks to the engine and transmissions increase power and responsiveness.

The '09 Fit exceeds expectations in all ways, with both owners and reviewers praising its precise yet fun handling. The nimble hatch offers SUV-like versatility with its seating and cargo configurations, but injects plenty of driving excitement and punch behind the wheel for the daily commute. Despite its high fuel efficiency, potential buyers should be aware that the Fit does cost more than the Ford Focus and Nissan Versa and nearly as much as a better equipped entry-level Civic. 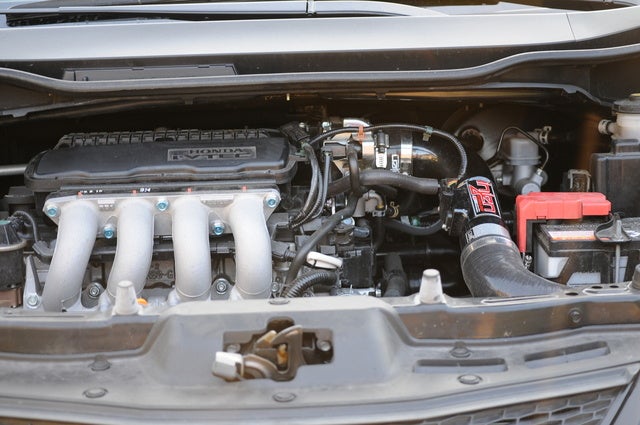 The 16-valve, 1.5-liter four-cylinder i-VTEC engine returns to the '09 Fit, with larger intake valves and revisions to the intake manifold. The updates add 8 horsepower for a total of 117 hp, and the 106 lb-ft at 4,800 RPM torque rating is up one point from 2008. Rated as ULEV-II compatible, the Fit maintains Honda's reputation for outstanding fuel economy by averaging 27/35 mpg, with some owners claiming they get nearly 40 mpg on the highway. A 5-speed manual and 5-speed automatic represent the transmission choices, both of which have been slightly tweaked for quicker gear ratios. Automatics in the Sport trims feature paddle shifters on the steering wheel with Normal and Sport modes.

Around town, the '09 Fit can feel surprisingly powerful, with immediate pedal response from a standing stop. Credit can be given to its lightweight frame, weighing just under 2,500 pounds. Test drives measure 0-60 times of 8.9 seconds – not a speed demon, but impressive for a four-cylinder subcompact. Both transmissions earn high marks from critics. The manual offers short-throw excitement with precise gear transitions for satisfying driver feedback. Both owners and reviewers mention some acceleration noise and struggle at high revs, most noticeably during highway merging.

Looks can be deceiving. Though listed as a subcompact, the '09 Fit displays an energetic and agile personality on the road. Peppier than the Civic, with a firmer suspension and more driver feedback than the Versa, the front-wheel-drive Fit provides plenty of fun for the everyday commuter. Zipping around town, test drives reveal tight maneuverability, sharp cornering, and a nicely weighted steering wheel. Brakes still exhibit some sponginess, but their 0-60 stopping distance of 94 feet represents a small increase over last year.

Though the four-cylinder engine does struggle noisily on the highway, city driving feels smoother and more precise than 2008 models, according to several owners. Professional reviewers notice little vibration when idling or revving at high speeds, and the engine remains quiet and nearly imperceptible in everyday driving situations.

The Macpherson strut front and torsion-beam rear suspension, while allowing for more cargo room, has been softened somewhat to improve driver comfort. Though still firmer than most hatchbacks, it doesn't feel stiff or harsh over bumps, even in the Sport trim equipped with larger 16-inch wheels. A few critics complain that the slightly heavier '09 Fit has lost a bit of its sporty edginess from the first generation, but concede that the everyday driver will probably not notice a change in driving dynamics. Many reviewers prefer the 5-speed manual transmission with its short precise throws, although the automatic does not seem to reduce any of the engine's punch. According to every test drive, the Fit remains at number one among other subcompact hatches for fun and excitement.

Most of the changes to the '09 Fit focus on human rather than engineering mechanics. Its larger dimensions expand the interior cabin, adding 1.2 inches to the interior width, and placing the fuel tank beneath the front seats optimizes back-seat capacity. Owners and critics list the spacious interior as the Fit's number one selling point, noticing the increased roominess over the 2008 model. Front and rear passengers are treated to plenty of head and legroom, even for those over 6 feet tall, with 41 and 35 inches of legroom and 40 inches of headroom. The back seat exceeds that of a MINI, but falls slightly short of a Nissan Versa.

Driver comfort gets enhanced this year with the addition of standard tilt and telescopic steering and a steering wheel that adjusts forward and aft. A tweaked dash features blue-lit gauges that are both easy to read and easy to reach. A new fuel economy meter displays miles per gallon. Sport trims come with a new center armrest, but the lack of a center storage console bothers some owners. Softer plastics lend a higher quality feel to the cabin, with several critics agreeing that the Fit's interior finish and ergonomics surpass other hatchbacks in its class.

Rear visibility improves this year, thanks to a larger rear window and the addition of front quarter panels between the A pillars and the front windows. Moving the A pillars forward five inches also helps set a clearer side line of vision for the driver. As an extra benefit, this redesign lends a more open feeling to the cabin, helping to add to the sense of roominess.

The '09 Fit offers class-leading versatility for storage. Rear seats split-fold 60/40 flat into the floor at the flip of a lever, without the need to remove headrests. The front passenger seat also folds flat to make room for skis or long pieces of wood. Unique to the Fit, the rear seat cushions can fold up flush against the rear seat backs to provide an unobstructed floor-to-ceiling space of 51 inches. This “Magic Seat” feature enables you to carry a bike upright in the back. Cargo space behind the seats starts at an impressive 20.4 cubic feet and expands to 57. Tiedowns come standard. Interior storage compartments can be found in the double glove box, various pockets, and a lockable box underneath one of the rear seats.

For thirsty riders, the '09 Fit adds more cupholders this year, for a grand total of ten (two per passenger), four of which can be found in each of the doors. The base Fit comes sparsely equipped, which some owners find disappointing given the high cost of the subcompact. Riding on 15-inch wheels, it offers power windows, locks, and mirrors, air conditioning, and a CD/MP3 player with MP3 jack. The Sport jazzes things up with 16-inch alloy wheels, foglights, a rear spoiler, and a body kit. Inside, it adds wheel-mounted cruise and audio controls, a 6-speaker sound system, a leather-trimmed steering wheel, remote entry, and a new USB port in the glove box (optional for the base trim). The new touchscreen navigation system with voice recognition is optional only for the Sport.

Not yet rated, the '09 Fit should earn the same crash test scores as the 2008 model, since it returns with the same standard equipment and adds a few new safety-oriented features. The 2008 model earned five stars in frontal tests and four in rollovers. The standard four-wheel ABS brakes feature electronic brakeforce distribution. Six airbags include dual front, front-side, and side curtain bags for both rows. A tire monitor measures pressure in the larger 15-inch wheels. Honda's Advanced Compatibility Engineering is new this year, a design that spreads out the force of impact during collisions in order to minimize the effect on passengers.

Missing from the equipment list, traction and stability control are offered only with the Sport Navigation package. They add extra security and confidence in certain road conditions, and most owners overwhelmingly resent having to buy the navigation system in order to get these features. Drivers wish they either came standard or as standalone options.

The '09 Fit receives plenty of praise from happy owners. Aside from Honda's reputation for reliability, good resale value, and superior fuel economy, the Fit appeals to drivers looking for a budget subcompact without sacrificing power, driving dynamics, or interior space. Owners single out its spacious cabin and cargo versatility, saying that the hatchback feels a lot bigger than it is. The easy maneuverability and crisp handling contribute to the overall fun driving impression.

Though low in number, most of the negative comments focus on the lack of standard features, such as cruise control and stability control, considering the high cost of the Fit. For not much more money, you can buy a much better equipped Civic. Many owners wish for some form of height adjustment on the front seats and a standard center storage console.

Users ranked 2009 Honda Fit against other cars which they drove/owned. Each ranking was based on 9 categories. Here is the summary of top rankings.

Have you driven a 2009 Honda Fit?
Rank This Car

Anti Theft Or A Fuse.

Why CarGurus Can Not Help On My Sale

You indicate that you can not help me with this sale. One of the reasons stated was that you did not have access to my bank account. I did not see any reference to providing banking info when setti...

I Have The Code But How Do I Enter?

Do You Have A Phone Number To Ask Questions? See Other Questions Below.

i have a potential out of state buyer and i have a loan on the car i am selling. how will that work. how do they drive it back to their state?

How Can I Make The Seat In The Honda Fit 2009 Comfortable? Please Help The ...

The foot pedal is 5 inches fromt eh ground - the seat design is not working - the depth is 20 inches which is terrific as the 19inch seats don't give enough thigh suppot - but this is not allowing th...