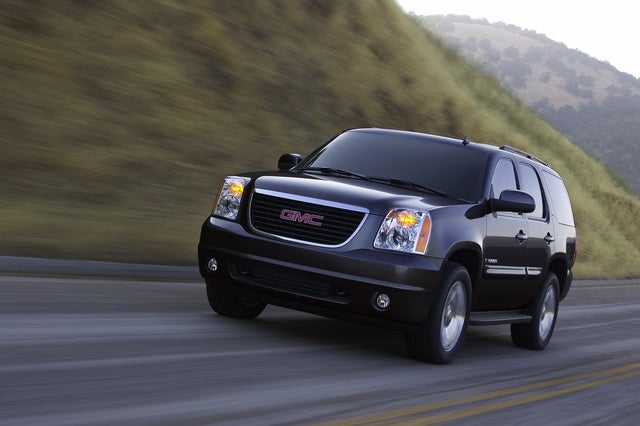 The 2009 GMC Yukon provides great power, great comfort, and great utility, and the addition of a six-speed transmission only improves its already enjoyable driveability.

The '09 Yukon's status as one of the most fuel-efficient full-size SUVs on the market is a dubious honor at best.

It’s hard to apply logic to the giant SUV craze of the last decade. If this is what you’re looking for, if this is something you can afford, the Yukon is a great choice, and the negatives probably won’t be enough to sway you. In all, the Yukon does what it was designed to do very well, and if you get the optional rear-detection system and load-leveling suspension, you’ll have relatively little to complain about.

The 2009 Yukon is GMC’s full-size SUV, rebadged from the full-size Jimmy back in 1992. It now sits on the GMT900 platform, shared with other full-size entries from Chevy/GMC like the Tahoe, the Escalade, and the H2, as well as pickup trucks like the Silverado and Sierra.

Seating up to nine, the Yukon gains a six-speed transmission in 2009, replacing the four-speed used in previous years and still available on base models. Depending on trim level, the Yukon is available in either rear-wheel or four-wheel drive. Look for new Dark Crimson Metallic paint in 2009 as well. 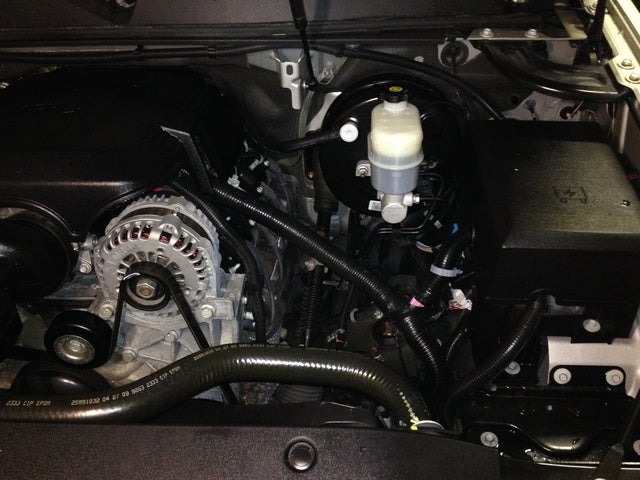 Available in both RWD and 4WD trims, the Yukon boasts 14/20 and 14/19 mpg ratings from its 320-hp, 5.3-liter Vortec V8 - not unimpressive, especially when you consider its nine-person seating, a towing capacity of more than 8,000 pounds, and its flex-fuel capability option. A standard non-flex-fuel 5.3-liter is also available, and a 4.8-liter comes with the base trim, still putting out a respectable 295 hp and retaining the previous model year's four-speed automatic transmission. All models have a gross vehicle weight rating of over 7,000 pounds.

All three engines are strong both off the line and at speed, although the 4.8 can struggle slightly when heavily laden. Both transmissions provide crisp responsiveness, although the six-speed is a welcome upgrade from the four, which is part of what holds the 4.8-liter back some.

Also available is a Yukon Hybrid, which mates a 6.0-liter V8 to an electric motor for a total output of 332 hp and a maximum towing capacity of 6,200 pounds. Testers have found that there is relatively little difference in power and operation between hybrids and conventional engines in the Yukon, with the only difference being a small power surge experienced when transitioning between full electric and gas power. Paired with a continuously variable transmission, Yukon Hybrids get 20 mpg, whether around town or in the city.

All trim levels are available in RWD, while the SLE and SLT can be outfitted with full-time 4WD that's as at home on dry pavement as it is in the mud and snow and includes a low-range gear. Ride comfort has been noted to be very car-like, especially over bumps, with only slight float over dips and swells. GM's Autoride load-leveling suspension does its job combating many of the boat-like characteristics that can be encountered with a full-size SUV, but doesn’t seem to improve overall absorption. While still a large SUV, relatively little body lean or nose-plowing has been described in turns. The alarmingly progressive steering is very light at low speed, which is nice to be sure, but tends to lean toward oversteer at speed, which can be unnerving. Brakes however, inspire nothing but confidence. 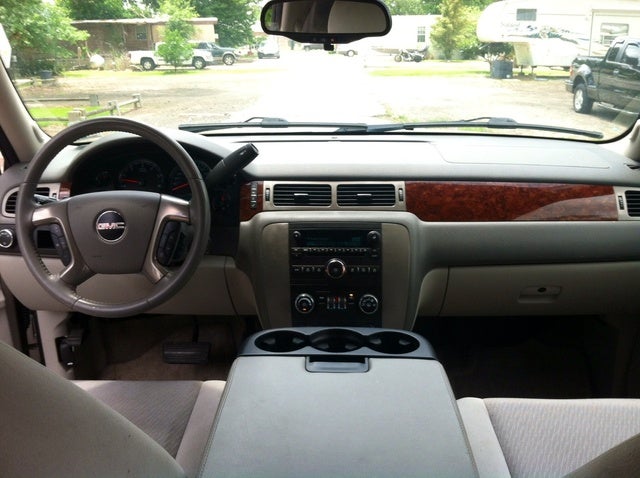 The Yukon’s spacious interior has been well-received across all trim levels, with high marks for fit and finish. Comfortable seats, whether bench or bucket, and ample headroom make for a fine ride, with over 60 cubic feet of space with all seats in place and almost 109 with the rear seat lying flat.

Controls are well-placed for both reach and vision, although some have complained about indistinct markings on the gauges themselves. Visibility is surprisingly good, hampered only in the immediate rear, and helped immensely by the optional rearview camera. Interior room for the driver benefits from adjustable pedals, although there’s ample space regardless, even in the second row, although the third row is difficult to access and occupy. Additionally, with the third row in place, there’s not a lot of room left for storage, and the seats fail to fold flush, necessitating removal for larger items.

With four-wheel ABS controlling its four vented discs, the Yukon isn’t short on stopping power. Coupled with a myriad of safety features including traction and stability control, a rear limited-slip differential, and electronic brake distribution, you won’t feel like you’re cruising around in a tank. Standard front and head-curtain airbags come standard on all four trim packages, as well as a tire-pressure monitoring system and one year of OnStar, level-dependent on trim package.

NHTSA ratings are impressive at five stars in all categories except rollover and rollover resistance, which garner three stars.

Owners welcome the power and capacity that come with the Yukon, especially considering that style and comfort don’t need to be sacrificed. Many have found that the Yukon occupies a niche nestled between entry-level large SUVs and luxury SUVs, with most of the benefits of its higher-end competitors. This is at least partially true, as the Yukon is in many ways simply a rebadged Escalade.

Users ranked 2009 GMC Yukon against other cars which they drove/owned. Each ranking was based on 9 categories. Here is the summary of top rankings.

Have you driven a 2009 GMC Yukon?
Rank This Car

36 views with 2 answers (last answer about a year ago)

How Do I Go About Trading In My Car And Purchasing A New Car Through Car Gu...

Want to trade my vehicle in on a new car

Is it ok to use no ethanol fuel in a 2009 Yukon Denali? Or which fuel is best?

I have a 2009 GMC Yukon Denali and same thing. I replaced the fuel pump in December of 2017 and went to O'Reilly's to check the battery, alternator, and starter to see if those were any of the probl...

Hello, I have a 2009 GMC Yukon, SLT (4WD). I have two issues; 1- While fueling the car with petrol, the fulling process stops frequently and the fuel station personal must hold the fuel pipe so the ...