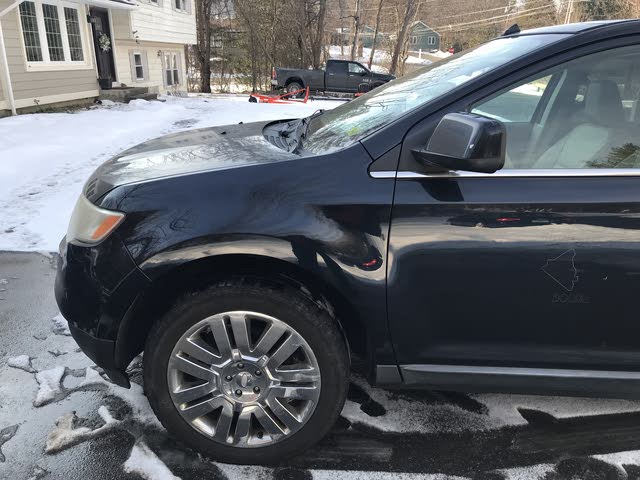 Stylish good looks attract admiring eyes, but car-like handling paired with SUV functionality and comfort make the '09 Edge one of the most popular crossovers on the market.

The '09 Edge combines unique styling with superior passenger and cargo space, wrapped in an agile crossover package. The extra flair provided by the new Sport trim gives this family-oriented SUV an edgier look for those unwilling to sacrifice personality for utility. Mushy brakes remain the only major drawback to the Edge's smooth handling and strong safety profile.

Quickly becoming one of the best-selling crossovers on the road, the 2009 Ford Edge continues to impress with its attractive blend of easy driveability with SUV cargo and passenger versatility. Offered in both front-wheel and automatic all-wheel drive, the '09 Edge appeals to families looking for all the SUV trappings and stylish looks at an affordable price. This midsize crossover returns relatively unchanged in terms of features, but adds a new trim and more options.

Cargo tiedowns, hooks, and a net are now standard for all trims, and interior air vents get revamped to improve air flow. Some new options appear for '09, including an ambient lighting package that offers a choice of lighting colors for the cupholders and foot wells. A next-generation voice-activated navigation system comes bundled with Sirius satellite radio, providing real-time traffic, weather, movie, and event information, along with gas prices at nearby stations.

The biggest addition to the '09 Edge lineup is the new customizable Sport trim. Since it carries the same engine as the SE, SEL, and Limited trims, the Sport name refers primarily to appearance and handling. It gets a sport-tuned suspension and choice of 20-inch premium painted wheels or 22-inch alloy wheels, the largest offered on any crossover. The latter come paired with 40-series Pirelli Scorpion Zero tires. On the outside, the Sport boasts a distinct front air dam with integrated foglights and a lower grille, body-colored panels, side and rear skirts, smoked head and tail lamps, and dual chrome exhausts. The interior keeps front passengers in place with bolstered leather sport seats decorated with suede inserts and contrast stitching, complementing the leather shifter and steering wheel. Like the Limited trim, the Sport comes standard with the Sync entertainment system. 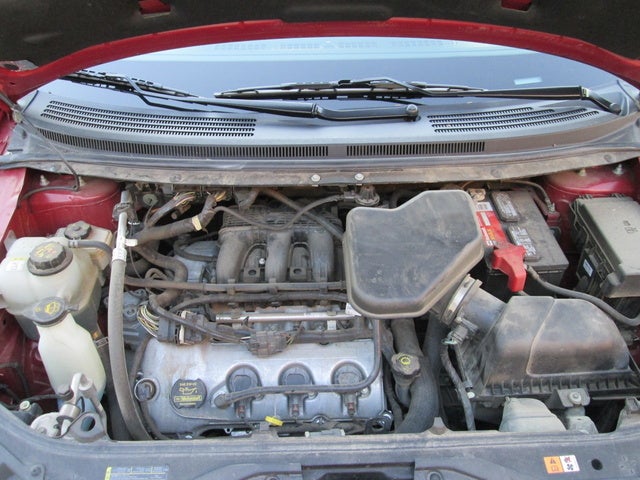 The '09 Edge puts out a satisfying 265 hp and 250 lb-ft of torque at 4,500 RPM with its 24-valve Duratec 3.5-liter DOHC V6 engine. Paired only with a 6-speed automatic with overdrive, the powertrain exhibits good punch during highway passing, but can be slow off the line, according to test drives of both the 2008 and 2009. The new Sport trim uses the same engine. Though not particularly sporty, it packs plenty of fun, and Ford claims 0-60 times of 8.4 seconds in AWD versions and 7.4 in FWD – numbers backed up by professional tests.

The engine is PZEV-compliant, and fuel efficiency ratings (17/24 mpg in FWD, and 15/22 in AWD) earn an equal array of compliments and criticisms, although in these times owners always wish for better mileage. In fact, the numbers are normal for this segment. The Edge's 3,500 pounds of towing capacity ranks about average for midsize crossovers. Professional reviews from the virtually identical 2008 model cite the V6 as energetic and quick enough for the typical Edge driver, though it tends to be slightly noisy at higher revs, and the automatic transmission can be slow to find gears. 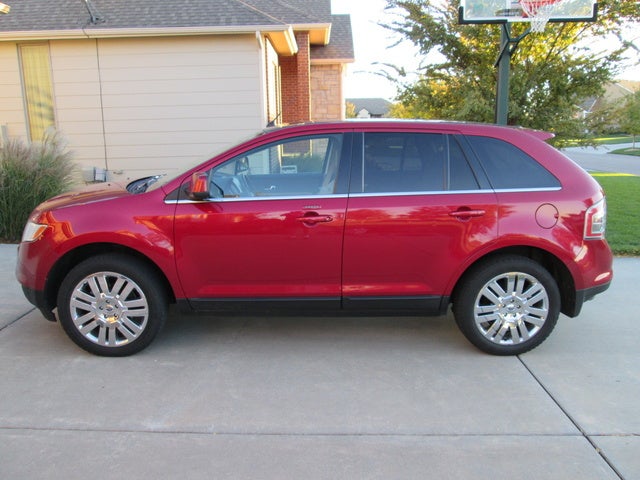 Based on owner and critic reviews of the 2008, which should carry over to this year's version, the Edge exhibits smooth, car-like handling on its Macpherson strut front and multilink rear suspension. Bump absorption comes across as surprisingly clean, even in the sport-tuned Sport trim. The larger 20- and 22-inch wheels in the Sport provide a slightly rougher ride, but not in an overly intrusive way.

Precise steering complements easy maneuverability. However, several test drives found considerable body lean and tire squeal during tight turns, more than expected for a midsize crossover. By far the biggest complaints from both drivers and reviewers of the 2008 Edge focus on its soft brakes. While they perform responsively, the 60-0 stopping distance is remarkably long, measured at 152 feet by Edmunds in 2008. Owners single the brakes out as the most noticeable negative in the otherwise agile and solid handling of the '09 Ford Edge.

The all-wheel-drive system performs capably, defaulting to front-wheel drive, but automatically distributing torque to the rear wheels when needed in wet or slick conditions. Lacking low-range gearing, the Edge is not intended for off-road use, but drivers appreciate the extra surefootedness and safety that come with the AWD. 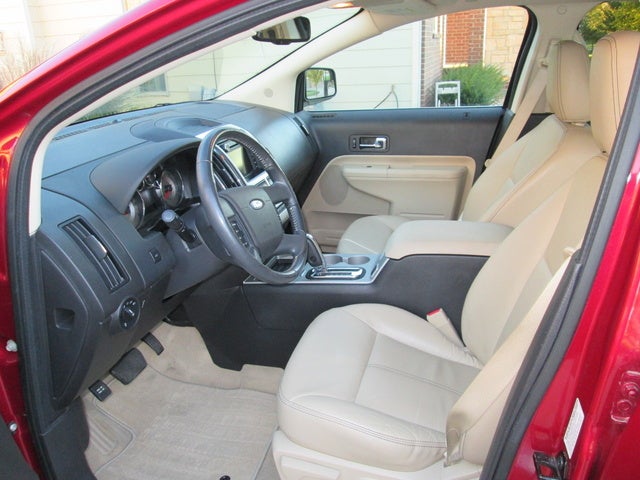 The 2009 Edge seats five adults comfortably in two rows, with good leg and headroom in the front and back, despite the sloping rear roof line. Drivers are aided by standard tilt and telescopic steering and easily accessible controls and gauges. Six-foot adults might feel a bit cramped in the back in trims equipped with the sunroof, but even so, their heads won't hit the ceiling. Legroom measures 40.7 inches up front and 39.3 in the back, with 60 inches of cabin width. A nice feature of the '09 Edge is its reclining rear seats, which offer even more comfort on long trips.

Rear seats split-fold 60/40, but curiously do not fold flat. A power-fold feature comes standard on the Limited and is optional on all other trims. With seats up, the Edge holds a generous 32 cubic feet of storage, but dropping seats expands it to only 70 cubic feet, slightly less than the smaller Toyota RAV4. The new tiedowns, hooks, and net keep objects from sliding around. A low load-in height eases accessibility, but the high-raising liftgate can be hard to close for some drivers, who might want to consider choosing the power liftgate option. Storage units inside the cabin include an oversized glove box and a large center console big enough to hold a laptop.

The base SE feels more upscale than its entry-level standing in the lineup, with standard power features, wheel-mounted controls, remote entry, and a CD player with MP3 jack. The SEL adds alloy trim, a heated steering wheel, a trip computer, a power driver's seat, and a 6-CD changer. Representing the peak of the lineup, the Limited boasts heated leather seats, power front seats with driver's memory settings, a power liftgate, a garage opener, and the Sync setup. This highly praised voice-activated system provides a central control unit for wireless phone, entertainment, and music connections. When introduced in 2008, Sync wowed new owners with its ease of use.

Optional for all but the SE, the Vista sunroof features tilt and slide action, opening up nearly the entire roof of the cabin. Though it cuts down somewhat on rear headroom, test drivers like how it opens the interior. When in tilt position, the sunroof can generate a lot of conversation-obscuring wind noise, but when fully open, an automatic wind deflector mitigates this problem. Other options add the retooled voice-activated navigation system, a rear DVD player, and optional satellite radio.

Reviews from critics and owners of the 2008 remark on the quiet ride and overall comfort of the seats and spacious interior. Some reviewers feel disappointed by the poor quality of the interior materials, which markedly lag behind most other crossovers on the market, but owners are impressed with the comfort and convenience of the '09 Edge. 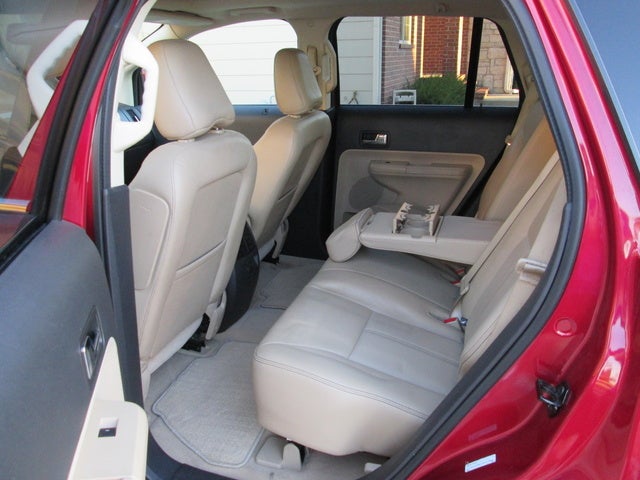 Since there are no changes to the standard safety equipment in the '09 Edge, it should easily earn the NHTSA four- and five-star ratings of the 2008 model. Rollover tests have not yet been performed. Stability control includes rollover sensors and mitigation. Other features include traction control, automatic headlights, a tire monitor, and four-wheel ABS brakes with electronic brakeforce distribution. Dual front and front-side airbags keep front passengers safe, and side curtain airbags come standard for both rows. The SEL and Limited feature sensors for rear parking assistance. 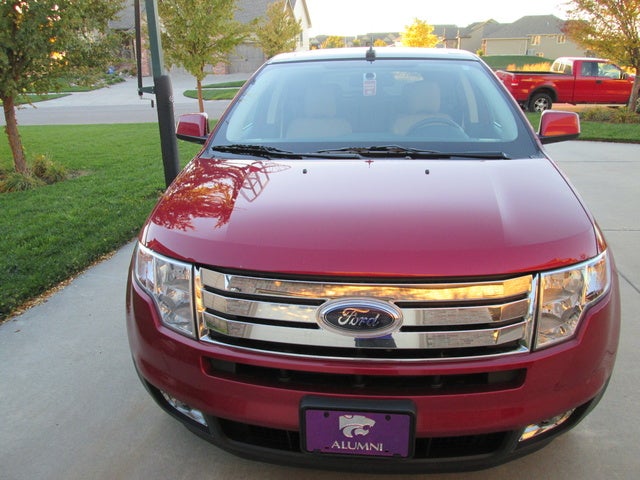 Though no user reviews for the '09 Edge have come out yet, the similar 2008 version earns overwhelming praise and satisfaction. Many owners find it difficult to come up with criticisms beyond the soft brakes. They do mention the poor fuel economy as needing improvement, even though the Edge's mileage numbers are similar to those of comparable crossovers. Most of the praise goes to its roomy interior and eye-catching good looks. CarGurus owners also mention its strong V6 power, comfortable seats, and AWD capabilities in bad weather.

Users ranked 2009 Ford Edge against other cars which they drove/owned. Each ranking was based on 9 categories. Here is the summary of top rankings.

Have you driven a 2009 Ford Edge?
Rank This Car

My ford edge 2009 SEL model heats in traffic or slow driving but not frequently. What i found the issue might be cooling fan turns off after sometime and turns on in the interval of 15 to 20 minutes...

22 views with 7 answers (last answer about a year ago)

Battery Light On Dash Came On, Won't Go Off

dash light for battery stays on.

I just bought a 2009 Ford Edge Limited car. Please see attached photos When I'm inside the car, the interior lights do not go out. I circulate like that all night with the light inside. Can you help m...