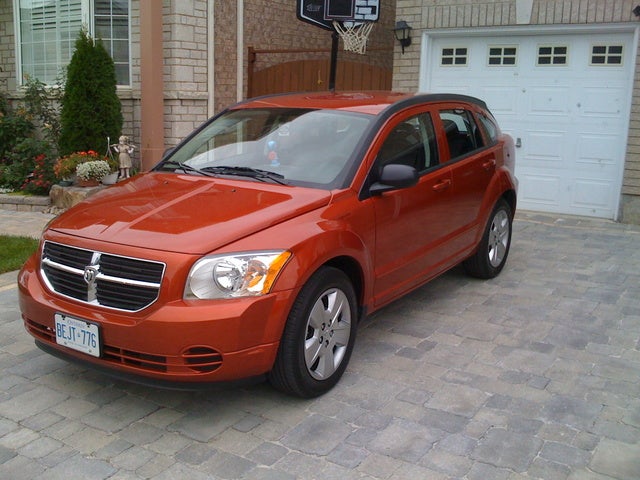 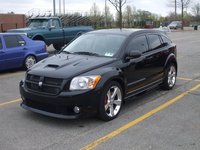 For roominess, heady styling, and sheer value, the 2009 Dodge Caliber would like to be the little engine that could.

Lackluster handling characteristics, below-quality cabin materials, and disappointing construction quality keep the ’09 Caliber well behind most others in its class.

The 2009 Dodge Caliber is roomy, stylish, and an attractive value. Only the high-end Caliber trims, however, even approach the competition for acceleration, handling, design quality, and pure driving pleasure.

Only one fairly significant and questionable change defines the 2009 Dodge Caliber hatchback. Gone is the R/T all-wheel-drive trim, leaving the Caliber available only with front-wheel drive. A few exterior color options have been added, along with some extra badging, and that’s about all that’s different style-wise for ‘09.

The Caliber is offered in four trims for ’09, the base - and basic - SE, midlevel SXT and R/T, and the top-of-the-line SRT4, which was introduced to the lineup in 2008. Plenty of cargo space (48 cubic feet with the rear seats folded flat) and a spacious cabin mean the Caliber can handle a trip to the mall or a trip across country with equal ease.

The five-door, five-passenger Caliber, which replaced the Dodge Neon sedan in 2007, has not been well received by more than a few reviewers due to a significant lack of power, mediocre fuel economy, less-than-ideal handling characteristics, and shoddy cabin materials, especially in the lower-end trims. Most professional reviewers agree, however, that the Caliber’s price is right and that in the R/T and SRT4 trims, owners will get a load of features for their money. 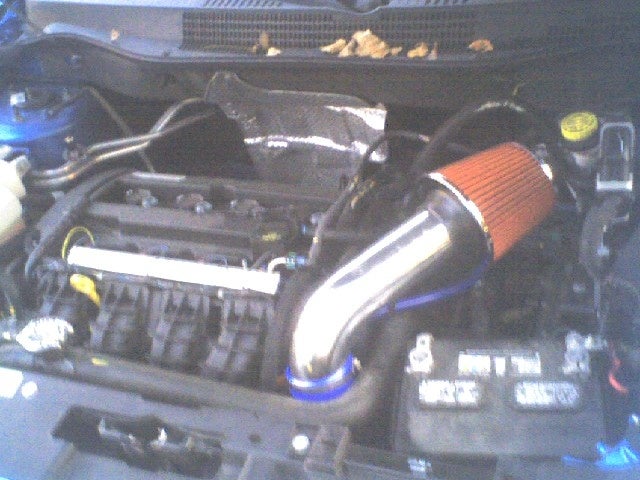 For 2009 the Dodge Caliber offers a choice of four four-cylinder engines and three transmissions.

The base engine for the ’09 Caliber, standard in both the SE and SXT trims, is a 1.8-liter, DOHC inline four (I4) eking out 148 hp at 6,500 RPM and 125 lb-ft of torque at 5,200 RPM. The 1.8- liter is mated to a five-speed manual transmission, which is, perhaps, its only saving grace, since the combination gets an EPA-estimated 24/30 mpg. One reviewer claims 0-60 takes 9.8 seconds with the 1.8 liter, but frequent shifting with a cranky transmission was needed to achieve this acceleration.

Optional for both the ’09 Caliber SE and SXT is a 158-hp, 2.0-liter DOHC I4 with variable valve timing and a constant velocity transmission (CVT) with the AutoStick manual feature that puts out 265 lb-ft of torque and gets an estimated 23/27. Many professional reviewers rank the 2.0-liter engine marginally better than the base 1.8 liter.

The Caliber R/T trim packs a standard 2.4-liter DOHC I4 that grinds out 173 hp at 6,000 RPM and 166 lb-ft at 4,400 RPM. This engine is combined with the standard five-speed manual transmission to get an estimated 23/29. Acceleration for the 2.4-liter R/T is described by at least one reviewer as “adequate.”

The 2009 Caliber SRT4 carries a standard 2.4-liter turbocharged I4 powering out 285 hp at 6,000 RPM and 265 lb-ft of torque at 6,000 RPM. The 2.4-liter turbo is paired with a six-speed manual transmission and gets 19/27. By far, professional reviewers find the SRT4 to have the best acceleration of all the Caliber trims, though a claim of 0-60 in just under 6 seconds for the SRT4 is disputed by one reviewer.

The lower-end Caliber trims for 2009 fare poorly in a number of reviews. The Caliber SE and SXT, with front and rear independent suspension, have been notable for lackluster acceleration, a rough ride on poor roads, lackluster steering, and an annoying tendency to lean a bit too much when cornering. The Caliber SE, with its pint-size 15-inch wheels, is noted by reviewers for an annoying squeal in aggressive cornering. The SXT trim, sporting 17-inch wheels, is somewhat less noisy in turns. The Caliber R/T rides on 18-inch wheels and, with its sport-tuned suspension, fares better in most reviews, but still trails the competition.

The Caliber SRT4, with its turbocharged power-plant, 19-inch wheels, performance-tuned suspension and steering, as well as its lower chassis, is considered by all reviewers the best in the Caliber lineup for acceleration and handling befitting its top-end status. Professional reviewers still find, however, that the SRT4 has a ways to go to equal the Chevy HHR and Volkswagen GTI in ride quality and agility. Indeed, most reviewers find the ’09 Caliber’s handling characteristics, at all trim levels, to be well below those of almost everything in its class. 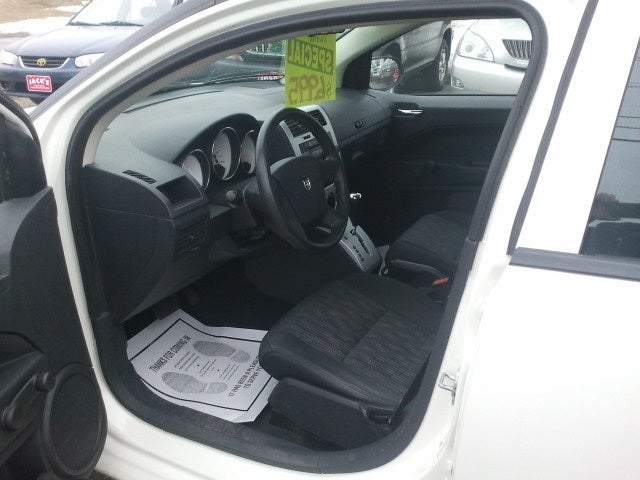 The 2009 Caliber shows off its appreciable value with its list of standard comfort and convenience features, especially in the higher-end trims. Discounting a disappointing lack of quality cabin materials, the passenger room and cargo space (48 cubic feet with the rear seats folded flat) in the ’09 Caliber is also considered by many reviewers far better than most of its class. Gauges and instruments are noted by reviewers as well-situated and large enough to be easily read, but not especially attractive.

The base Caliber SE offers such standard attractions as sliding armrests, a rear spoiler, tilt-wheel steering, an outside temperature display, a CD/MP3 player with four speakers, the Sentry Key theft-deterrent system, solar-controlled glass, and fold-flat rear seating. Options for the Caliber SE include the 2.0-liter I4 with CVT, air-conditioning, and the Chill Zone glovebox cooler and upgraded paint.

The Caliber SXT adds power windows, locks, and mirrors, cruise control, remote keyless entry and air-conditioning with the Chill Zone to the list of standard features, with options such as the 2.0-liter engine with CVT, a leather-wrapped steering wheel, and an upgraded sound system with articulated lift-gate speakers. 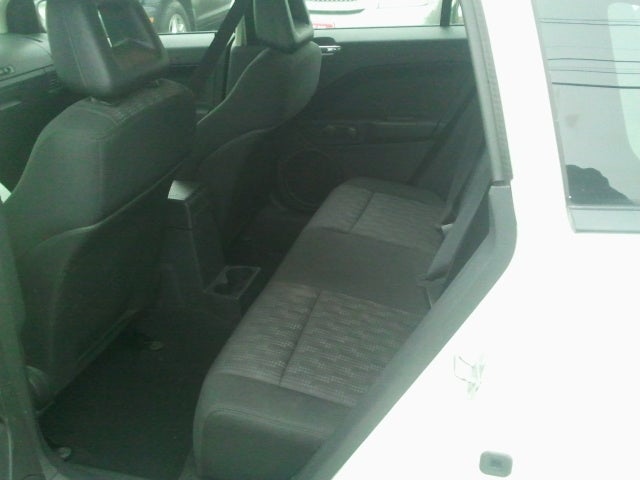 The 2009 Dodge Caliber’s standard safety features run from front and side impact airbags and side curtain airbags in the SE trim to front-wheel disc ABS in the SXT to four-wheel disc ABS with brake assist in the R/T and SRT4 trims. The SRT4 also comes with the ESP standard.

Front-wheel disc ABS is not offered even as an option in the SE trim, leaving it with only power-assisted front-disc/rear drum brakes. Neither professional reviewers nor owners mention any braking issues with the Caliber trims.

The NHTSA gives the 2009 Caliber five stars in front and side impact tests, and four stars in rollover tests.

As always with Dodge products, styling is at the top of the owner approval list. The 2009 Caliber is no different. “Bold,” “nice,” and “sleek” are among the most common words that owners use to describe the Caliber’s looks.

Poor visibility, especially to the rear and due to wide roof pillars, has many owners straining to spot obstacles when backing and cornering. The base 1.8-liter engine is considered more than a bit underpowered and noisy by many owners, and poor-quality interior materials also make the list of owner complaints.

In addition to finding the ’09 Caliber among the best looking in its class, owners also laud the roominess, stability (despite what professional reviewers say), and standard features in the higher-end trims, with the dashboard, interior layout, leather appointments, the UConnect hands-free communications system, MyGIG, and premium audio systems being especially praiseworthy.

Have you driven a 2009 Dodge Caliber?
Rank This Car

I need a car that will give me 20 k miles this is priced at $3400 2 owners clean car fax I am re building credit so I can not put a lot of money into a car within the next year. Honest...

I hate this car. I bought it off off my brother whom really never drove it. He got a hella deal and is a mechanic and helped me out in a needy situation. He bought a junk/parts caliber to replace d...

I have a 2009 dodge caliber with 84,000 miles on it. On my way home from work it made a strange noise and noticed the transmission fluid was pouring out from a plastic cover. What can cause this?

My caliber check engine light blinks and beeps my car still moves and the rpms run normal but my acceleration drops way low to the point i can barley make it up hills when i stop seems like engine ...