A low price, good fuel economy, and an attractive and spacious interior have all made the Chevrolet Aveo a welcome addition to the subcompact market, and this years' redesigned exterior and additional side airbags will only help cement its place in 2009.

Given all the negatives associated with economy cars, like the poor acceleration and buzzy engine the '09 Aveo still suffers, one would hope this car could achieve more than 34 mpg.

There’s nothing that makes the 2009 Chevrolet Aveo stand out distinctly from the rest of the subcompact market, either good or bad. It provides a pleasant, roomy interior and a generally composed ride, but lacks safety features that have become expected as standard on other vehicles. However, if you’re looking for a subcompact, and don’t mind the noise, this is a solid choice.

Available as either a four-door sedan or hatchback (Aveo5), the Aveo comes in LS, LT1, and LT2 trims for each body style. The LT2 trims get cruise control, power windows and locks, satellite radio, heated power rearview mirrors, and remote keyless entry, impressive features for this sub-compact economy car. 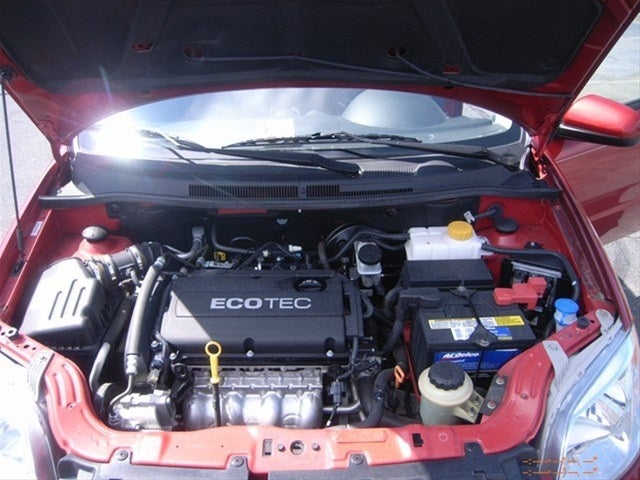 The Aveo gets an appropriately small power increase for its 1.6-liter, inline four-cylinder engine, bumping hp from 103 to a whopping 106, with matching torque numbers. This will deliver EPA mpg estimates of 25/34 mpg with the optional four-speed automatic transmission and 27/34 with the standard five-speed manual. Acceleration is quicker than one might anticipate, especially with the five-speed, but still generally lacking. Still, if it can’t be said that the Aveo is blisteringly fast, at least it’s obtrusively loud, especially with regard to the engine, which buzzes and whines annoyingly throughout the RPM range.

While many subcompacts suffer skittishness due to their short wheelbase and low weight, the Aveo actually handles rough roads with ease, imparting very little instability in normal driving. Steering is responsive, if slightly sluggish when driving slowly, and the Aveo's structural rigidity is above par for the class. Brakes are adequate as well, although not much is needed to stop a car with a curb weight of only 2,500 lbs.

Keep in mind that the suspension of the Aveo, while adequate, can be deceiving. At more than 1,000 lbs less than the average car on the road, the suspension is rarely taxed, even in harder cornering. Pushed too far, looseness and instability start to appear. 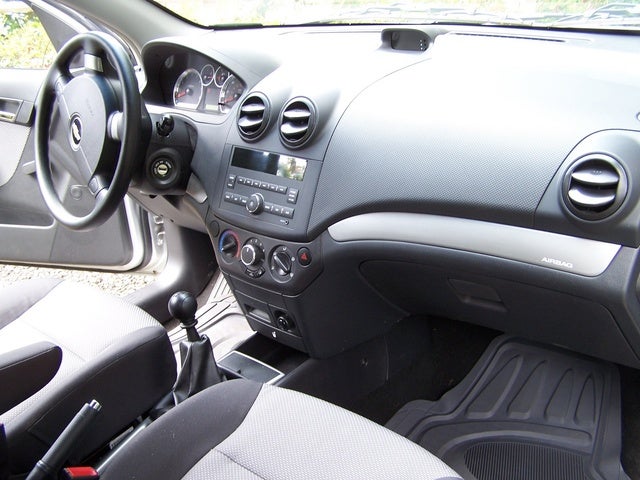 The interior of the Aveo suggests a far more expensive car than you would expect in a vehicle you can drive off the lot for less than $12,000. The controls are all well-placed, easy to use, and intuitive. The interior materials, while not short on plastic, are still of high quality, attractive, and finished with precision. The upscale LT2 package, with its upgraded upholstery and fake wood trim, are a welcome improvement over the already pleasing interior.

Further, and this is something you wouldn’t expect from the Aveo, it’s rather roomy inside. You’ll still have trouble with entry and exit, especially in the back seat, and tall drivers will want more legroom, but overall the Aveo is much more spacious than it seems from the outside. The seats are comfortable and supportive, and cargo room, while lacking with the rear seats held vertical, is surprising at 42 cubic feet in the hatchback with rear seats folded.

The one big drawback to the cabin of the Aveo is all the noise. The engine is noisy, the wind is noisy, road noise permeates into the cabin with ease, and these problems are only made worse in the hatchback. 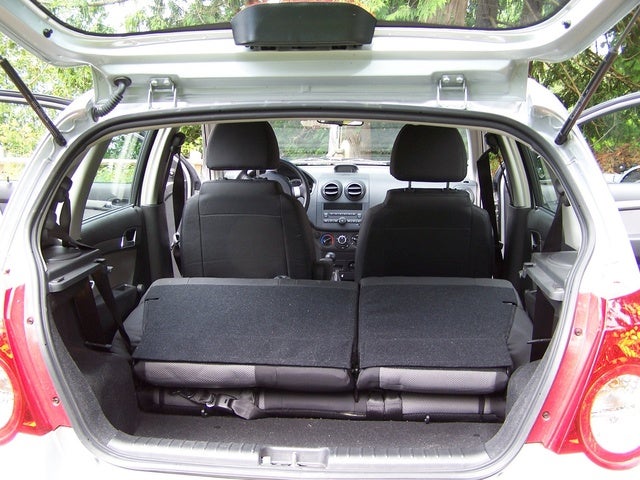 A solid seller since its introduction, the Aveo has been helped by the higher fuel costs of recent years and its entry-level price. It will be interesting to see if the decline in the cost of gasoline will affect sales, which have been additionally bolstered by a generally pleasant ride and attractive, functional interior. Whereas no one has been impressed with the performance of the Aveo, it is suited extremely well to city driving, where its lackluster acceleration and increased noise are less of an issue.

What's your take on the 2009 Chevrolet Aveo?

Janius Bought a new 2009 Aveo 5 LT the day before GM went bankrupt! Got a give away price and they included 7 year, 72,000 mile extended warranty! We love the hatchback and have carried desks, etc in the car. Gas mileage is so-so, I don't think I have ever gotten better than 31 MPG but then I've never gotten worse than 29 MPG either. Handling is terrible and unfortunately with the 14 inch wheels, very little can be done to improve it. If I keep the car, I am buying 15 inch wheels to replace the factory 14 inch. For such a small car it is roomy.

Have you driven a 2009 Chevrolet Aveo?
Rank This Car

What Can I Put In My Aveo?

I am looking to put a faster engine into my Aveo. I have no idea what will fit and what i can even put into it. I know I could get the engine out of a spark or sonic but I was hoping to get a V6. Ca...

Looking for a diagram or picture with the exact location of the idle air control valve. Thank you