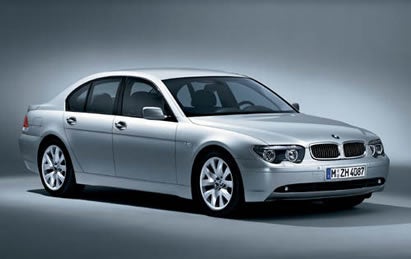 The 2009 BMW 7 Series sees a lot of upgrades this year, including a new, more powerful and more efficient engine, a small weight loss, new lines, and BMW’s new Driving Dynamics Control system. This full-size luxury sedan seats five and delivers power to the rear wheels through a six-speed automatic transmission.

Comfort is as much a priority as performance in this, the flagship of the German automaker’s fleet. Seats and suspension both provide any of a number of combinations of performance/support and comfort, with more than enough of both for long trips. The styling refresh sees a new front end, with an integrated bumper that pulls the visual weight downward, for a more grounded appearance.

Also new for 2009 are a blind-spot alert, a lane-departure warning, a heads-up display, sideview and rearview cameras, high beams that automatically dim when oncoming traffic is detected, and a 40GB hard drive for the audio and navigation systems. Available safety features include ABS, traction control, an anti-skid system, front side, curtain side, and knee airbags, as well as a standard navigation and new version of the much-maligned iDrive system that has been praised for its upgrades.

Users ranked 2009 BMW 7 Series against other cars which they drove/owned. Each ranking was based on 9 categories. Here is the summary of top rankings.

Most cars are out of state, if I wanted to purchase one and it's shipped here then when I go see it and test drive it, I decide it's not for me, what happens next? What am I obligated too?

what is the better car

How Can I Relist My Ad

Does Car Gurus Help Protect The Customers From Buying A Lemon

Dont want to buy a lemon then get stuck with a car as well as a note thats not worth anything.