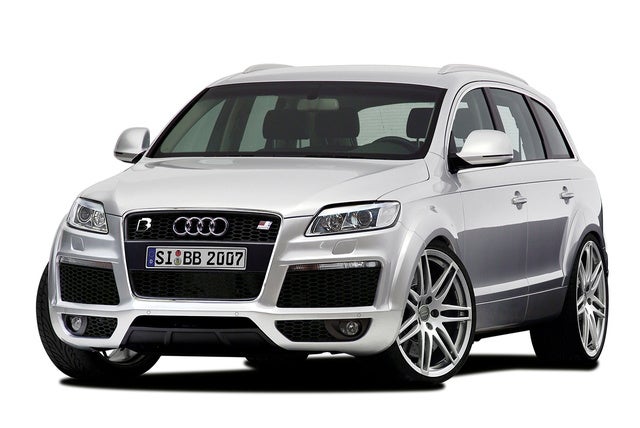 Now in its third year, the Audi Q7 offers a combination of luxury features, excellent build quality, and a smart-looking interior. Looking for a solid five- or seven-passenger luxury crossover SUV? The Q7 is a solid choice with high-end accoutrements, sporty handling, and the ability to transport kids and cargo with perfect ease.

The 2009 Q7 is a four-door crossover that comes in three gasoline driven trims: 3.6 Quattro, 3.6 Quattro Premium, and 4.2 Quattro Prestige. This distant relative of the Volkswagen Touareg and Porsche Cayenne is more than 12 inches longer than the others, and as such, offers more space for cargo and a third row of seats. However, it also weighs more than its counterparts, making it one of the slower crossovers on the block and more dependent on fuel. Audi has come up with a partial answer to these dilemmas for 2009 with a new TDI-powered version (which will be the fourth trim in the family of '09 Q7s), which is scheduled to arrive in dealerships shortly after its gasoline-powered counterparts. The TDI's 3.0-liter clean-burning diesel engine is 50-state legal. It's rated at a modest 221 horsepower, but as is typical of diesel powerplants, makes a healthy amount of torque - 369 lb-ft, to be exact. The advantages of the TDI Q7 include not only improved overall fuel economy, but increased range, which in turn reduces the number of trips to the pump.

In crash tests conducted by the National Highway Traffic Safety Administration, the ‘09 performed very well, scoring five out of five stars in front- and side-impact testing. In addition, Audi's blind-spot warning system alerts the driver when another vehicle is along the Q7's side. Optional lane assist alerts the driver if the car drifts out of its lane.

Q7s come with Audi's MMI (MultiMedia Interface). It uses a dashboard screen and a console knob and switches to set audio, navigation, suspension, and many other functions. Among available features are a voice-activated navigation system with rearview camera, rear obstacle detection, keyless entry and starting, and a three-panel sunroof. The optional S line Package includes steering-wheel shift paddles and unique trim and can be equipped with 20- or 21-inch wheels.

What the 2009 Audi Q7 is meant to do is carry people, not goods, in style. This it does with mechanical finesse and excellent all-weather road manners. It’s a good-looking machine despite its appetite for fuel and, with the exception of the TDI, its donkey-like acceleration. Audi’s design and workmanship also get a nod.

Guru9TJLYP If you want to spend a lot of money on it ...I didn’t...a lot of issues

Is it necessary to put the red plastic cover on the battery?

Im getting a deal on a 09 q7..it has 137,000 miles on it. Its has been serviced regularly by audi. What concerns should i be asking and looking for

I Just Got An Offer....buyer Has Not Responded To Any Offers To Test Drive/...

My car has not even been listed for 24 hours. A mysterious buyer without a picture or last name made an offer and accepted a counter. Buyer has not responded to my request that we set an appointme...