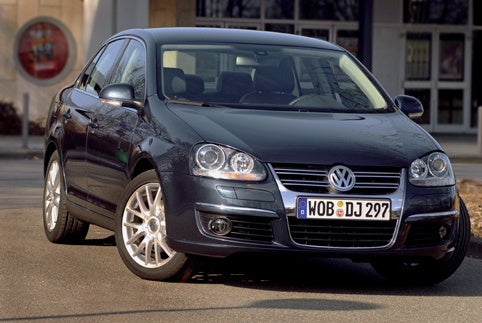 In an attempt to catch up to the selling power of the Civic and the Corolla, Volkswagen gave its Jetta midsize sedan a makeover in 2008. Leaving the 200-hp, 2.0-liter turbo inline-four engine to the GLI, the 2008 Volkswagen Jetta boosts power in its 2.5-liter inline five, adding 20 to achieve 170 hp and 177 ft-lbs of torque. Transmission choices range from the standard 5-speed manual to an optional 6-speed automatic (the SEL trim comes only with the automatic). The inline five is also available in a low-emissions PZEV version. However, drivers complain of the disappointing 21/29 mpg.

Now divided into three trims (S, SE, and SEL), the front-wheel-drive sedan gets a few more optional features at the same time that it ditches some standard equipment. Gone are the real leather seats in the SE and SEL (replaced by leatherette), automatic climate control, and HomeLink garage opener. New are optional 17-inch alloy wheels (standard on the SEL) and a sunroof, standard on SE and SEL and optional for the base S. A two-way power reclining driver's seat is newly standard across the lineup. The sedan seats four in two rows, with 60/40 split-folding rear seats that feature an armrest/trunk-passthrough. Owners love the spacious 16-cubic-foot trunk, but feel interior compartments and consoles could hold more.

The base S trim starts out with full power features, cruise control, and a CD/MP3 player with an input jack stuck inconveniently in the glovebox. Moving up to the SE gets you a sunroof, heated seats, leather trim, a fold-flat passenger seat, and a 6-CD player. The upscale SEL adds a trip computer, upgraded sound system, and wheel-mounted audio controls. The 2008 Jetta performs well in crash tests, earning top marks. All trims come equipped with ABS brakes and both dual front-side and side curtain airbags for the front row. Rear side curtain airbags are optional. Stability control is standard on SE and SEL trims.

Overall, drivers are pleased with the refined and smooth ride of the 2008 Jetta, and appreciate the extra power that makes time spent behind the wheel more fun. A large trunk, solid safety profile, and features such as satellite radio and heated seats also warm drivers' hearts. Criticisms focus on the boring exterior and reliability.

What's your take on the 2008 Volkswagen Jetta?

Have you driven a 2008 Volkswagen Jetta?
Rank This Car

Every Time I Put Gas In My Car I Have To Press On The Gas Pedal And Turn Th...

What other makes or year are compatible with my VW Jetta Wolfsberg edition for a radiator support , dual cooking fans system and head light assembly

What Do These 3 Error Codes Mean?

I have 3 error codes that were given to me on a diagnostic report from a repair shop ( i paid for the diagnostic test). They were not able to tell me what they meant. I was told to try the dealershi...

30 views with 2 answers (last answer about a year ago)

M y08 Jetta 2.5 shut down while driving along. I managed to pull off the road and put it in park. I turned the key and it would not turn over. No dash lights, no alarm pings or ding dings, gear shif...