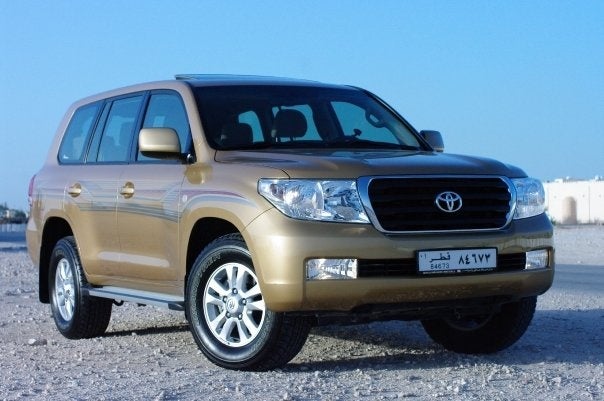 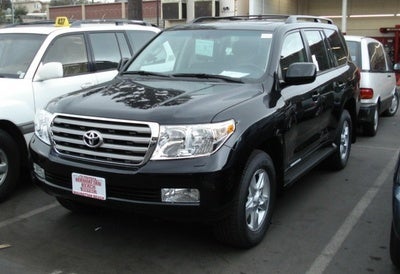 As a descendant of the Model BJ that scaled some of the highest reaches of Mt. Fuji over 50 years ago, the Toyota Land Cruiser luxury SUV has a long and storied tradition that began in 1958. The Land Cruiser has undergone a number of changes in the last 50 years, and 2008 proves no different. The biggest update comes under the hood, with a new 5.7-liter, 381-horsepower V8 engine with a six-speed automatic transmission. When it comes to safety, the '08 Cruiser gets an eye-opening 10 standard airbags. Toyota also slightly altered the exterior design and added air conditioning with climate control, a versatile storage box, and a universal-jack port for all your important portable devices. Need a drink? The '08 Cruiser adds cupholders so you can multi-task. However, don't expect upward of 40 trims, as you might with some of GMC's trucks and SUVs; the Land Cruiser comes in one base trim.

As you'd expect from a big SUV, gas mileage comes out to a thirsty 13 mpg in the city and 18 on the highway. The '08 Cruiser has four doors, seats eight, and offers a standard sunroof, air conditioning, power windows, power door locks, powered leather seats, a CD player, ABS brakes, stability control, and traction control. A navigation system is available as an option. And for those wondering whether the Land Cruiser can pull its weight, its maximum towing capacity is 8,500 pounds. Maximum cargo capacity reaches 82 cubic feet, so you should have enough room to store whatever you need for long trips.

Overall, drivers report that the Land Cruiser lives up to its storied name and reputation. No matter where you go, the sturdy frame holds up to just about any terrain and makes the ride smooth, just like those Quicksilver boats with the twin blades cutting through waves out in Australia. On the other hand, you might want a little more horsepower from a rugged SUV. In addition, gas mileage doesn't exactly top the charts, but you take that as part of the deal with a big vehicle. The 2008 Toyota Land Cruiser continues a strong tradition and should continue to impress drivers looking for adventure.

What's your take on the 2008 Toyota Land Cruiser?

Wilfredo Excellent off-road vehicle, with refined finish without falling into excesses. Incredible price and an unbeatable quality / price ratio. It can be compared to the LEXUS LX550.

Users ranked 2008 Toyota Land Cruiser against other cars which they drove/owned. Each ranking was based on 9 categories. Here is the summary of top rankings.

Have you driven a 2008 Toyota Land Cruiser?
Rank This Car

How Do I Get CarGurus Comfortable With Processing My For Sale Transaction? ...

How do I get CarGurus comfortable with processing my for sale transaction? The following prompt came on on your web site: Cargurus: Pay We can’t help with this sale at this time This might be bec...

heighy control is not working so pls help me

After what period should Air filter be replaced

Are land cruisers more durable than 4runners? I am told the 4runner v8 uses the same engine but price difference between the two is too much. Is an alluminium engine block as durable as Iron?