After a successful 7-year run, the original-recipe Toyota Highlander gets replaced for 2008 by an all-new version that sets the bar ever higher for midsize crossover SUVs. 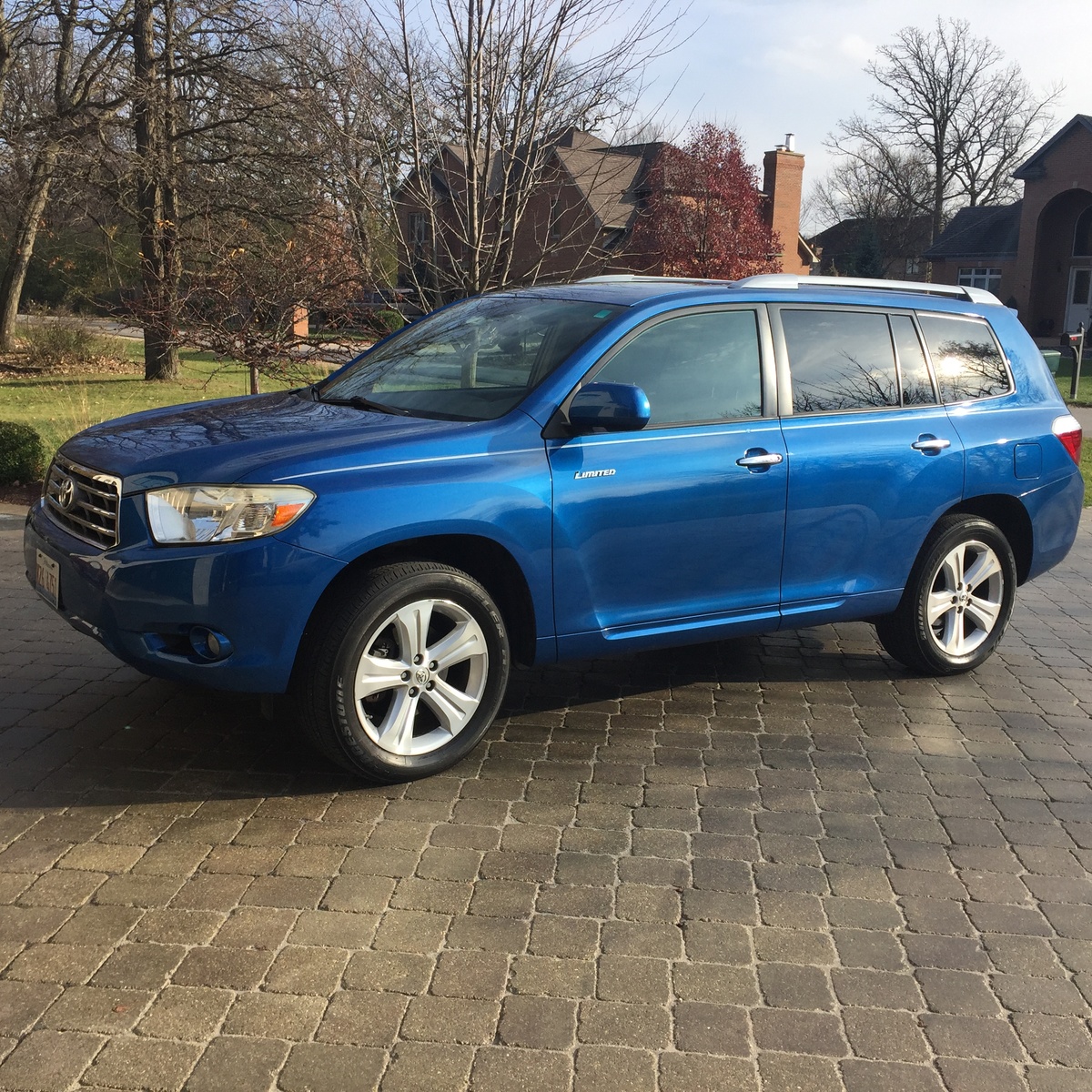 Arguably, the Toyota Highlander established the blueprint for all family-sized, 3-row crossover SUVs to follow. Its combination of reliability, quality, performance, and safety ensured that competitors came to the game ready for battle. And now, the redesigned 2008 Toyota Highlander moves the goalposts. It comes in base, Sport, and Limited trim levels, all powered by a V6 engine driving the front or all four wheels. 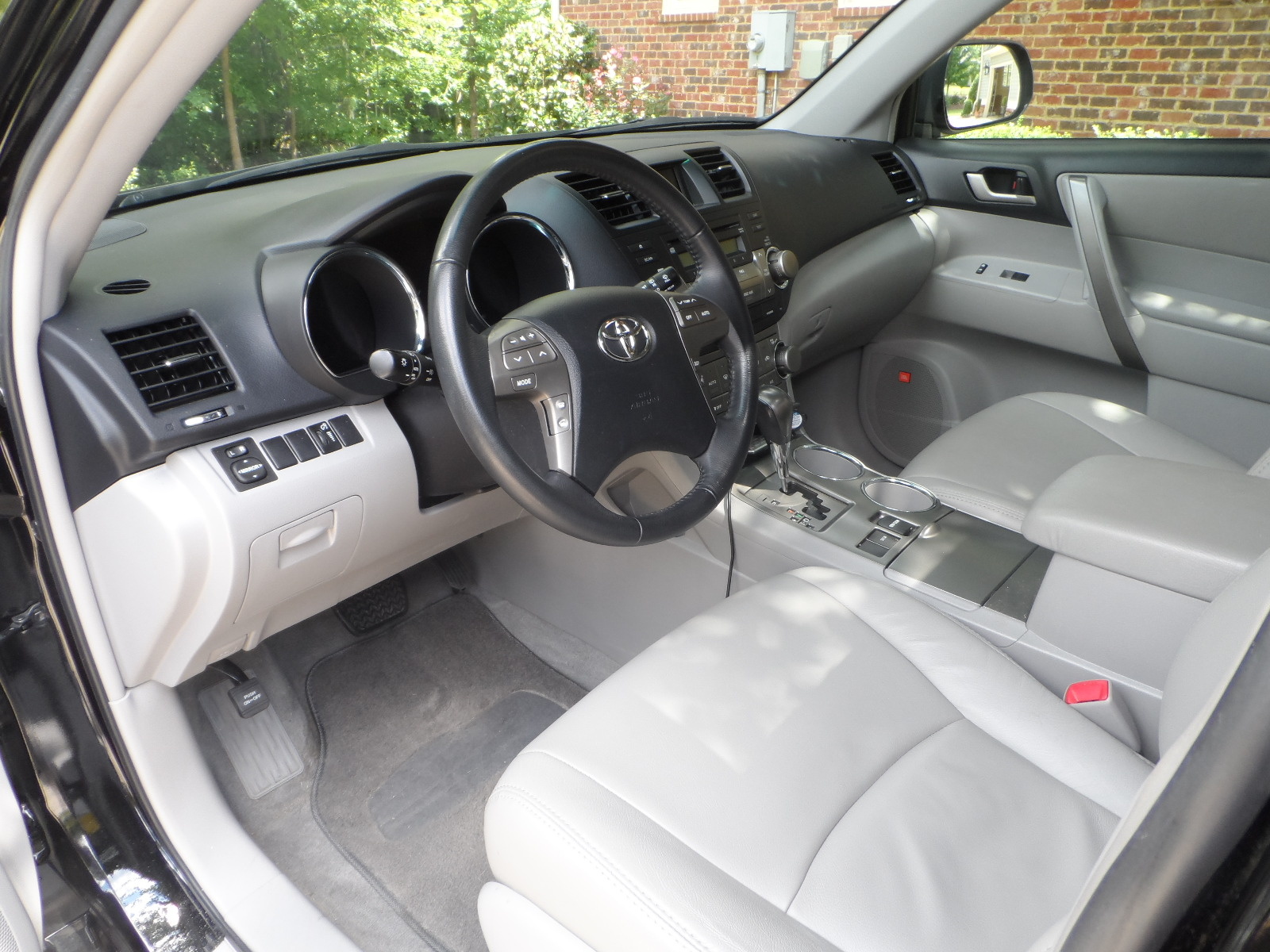 Toyota gets the all-new 2008 Highlander’s styling exactly right. Its artfully flared fenders, handsome 19-inch aluminum wheels (Sport and Limited), and refreshing lack of gray plastic cladding give it a clean and modern appearance.

Surface gloss and grain levels are appealing, and clearly marked buttons and oversized stereo and climate control knobs dominate the otherwise minimalistic interior. They're so big, people living in colder climates will have no trouble operating the switchgear while wearing gloves. Gauges are located in deeply recessed housings, and the front passenger airbag is deftly hidden behind a seamless dashboard panel. 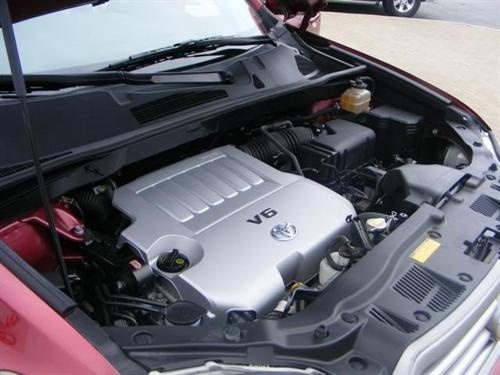 Any 2008 Toyota Highlander that doesn’t have a “Hybrid” badge on the front fender is equipped with a 270-horsepower, 3.5-liter V6 bolted to a 5-speed automatic transmission. Front-wheel drive is standard, with all-wheel drive an option.

The Highlander Hybrid returns for 2008, pairing a 3.3-liter V6 with front and rear electric motors to create an electric AWD system. The powertrain uses an electronic continuously variable automatic transmission (e-CVT), which is a power management system that doesn’t work like a traditional CVT. Total output is 270 hp, and while the Highlander Hybrid is heavier than the standard version of the SUV, that weight feels offset, thanks to the instant torque from the electric motors. Toyota also provides an EV driving mode that allows for purely electric operation at lower speeds.

Any 2008 Highlander is quick and nimble, but for the greatest athleticism, choose the Highlander Sport for its standard 19-inch wheels and a sport-tuned suspension. Regardless of which version you choose, the Highlander drives more like a car than a truck, which is one reason it’s the standard-bearer in the midsize crossover SUV segment. 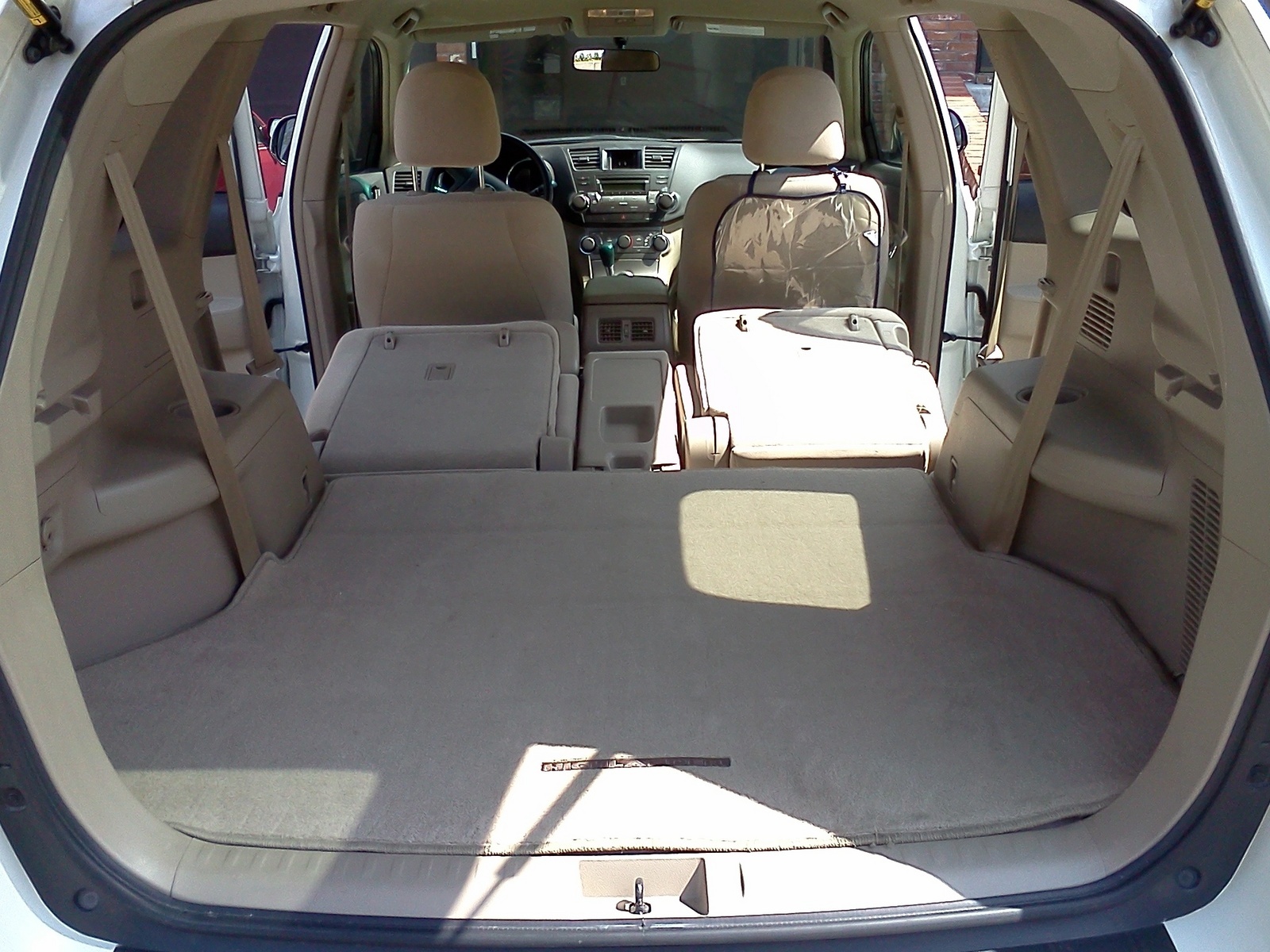 Up front, the 2008 Highlander provides comfortable seats wrapped in cloth or leather. Heated seats are available, and with Sport or Limited trim, the driver’s seat supplies 8-way power adjustability, including a power thigh-support adjuster.

A 40/20/40-split second-row seat is standard, offering a Center Stow function that allows a Highlander owner to remove the 20% center section to create a couple of captain’s chairs with a pass-through to the third-row seat. Legroom is generous in the second row, but not in the third-row. Adults can sit here for short trips, but it really is best reserved for children.

Toyota says the Highlander V6 can tow up to 5,000 pounds, while the Hybrid can manage as much as 3,500 pounds. 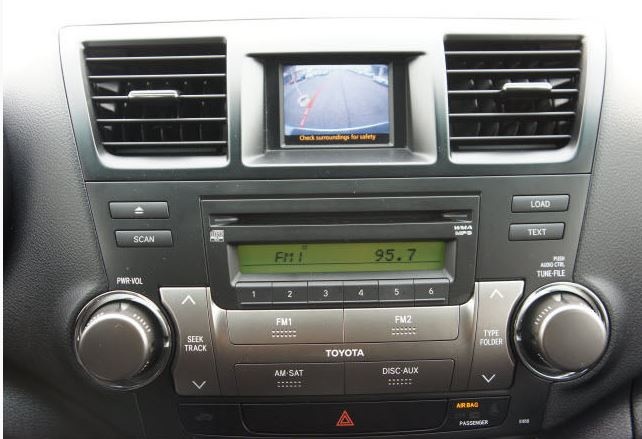 Standard equipment isn’t terribly impressive, amounting to a CD/MP3 player and an auxiliary input jack allowing iPod operation through the stereo system. But Sport trim adds a reversing camera that allows a driver to see what’s behind the SUV in addition to a 3.5-inch driver information display screen and a 6-disc CD changer. Limited trim is even more advanced, adding dual-zone automatic climate control, an auto-dimming rearview mirror, and keyless push-button engine ignition.

Options include a JBL premium sound system that also adds Bluetooth hands-free calling. With Bluetooth, you can pair your cell phone to the infotainment system and make and receive calls without holding the phone to your ear. The Highlander also offers a navigation system, a triple-zone automatic climate control system, and a rear-seat DVD entertainment system. 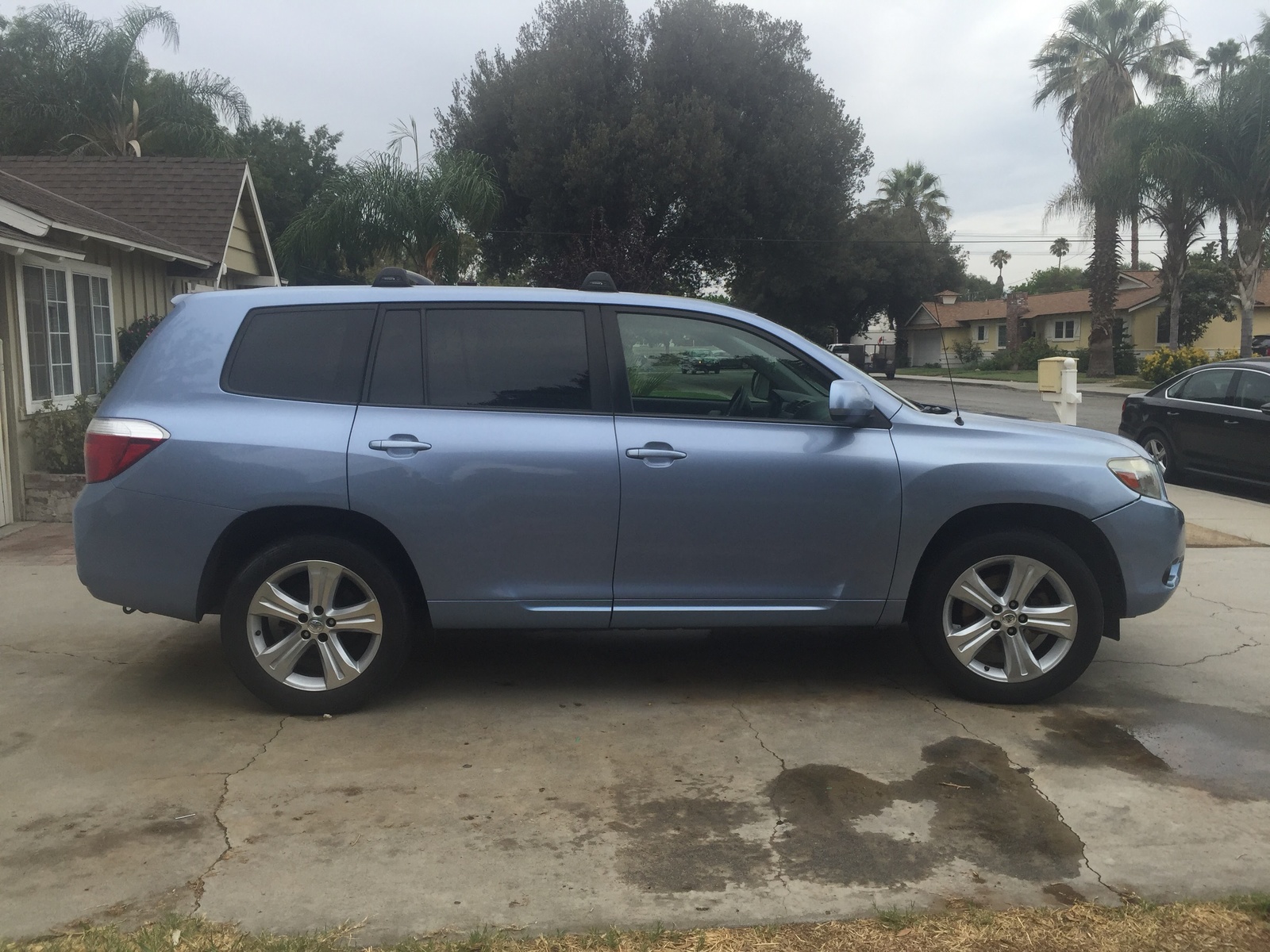 Toyota ups the Highlander’s safety equipment for 2008. Stability control is standard, and Toyota equips every version with dual front, front-seat side-impact, and 3-row side-curtain airbags. Drivers also get a knee airbag, and a reversing camera is standard on all but the base trim with the V6 engine.

In testing conducted by the Insurance Institute for Highway Safety (IIHS), the Highlander gets Good ratings in all four assessments, including for the seats and head restraints. The National Highway Traffic Safety Administration (NHTSA) determines the Highlander gets a mix of 4-star and 5-star ratings. 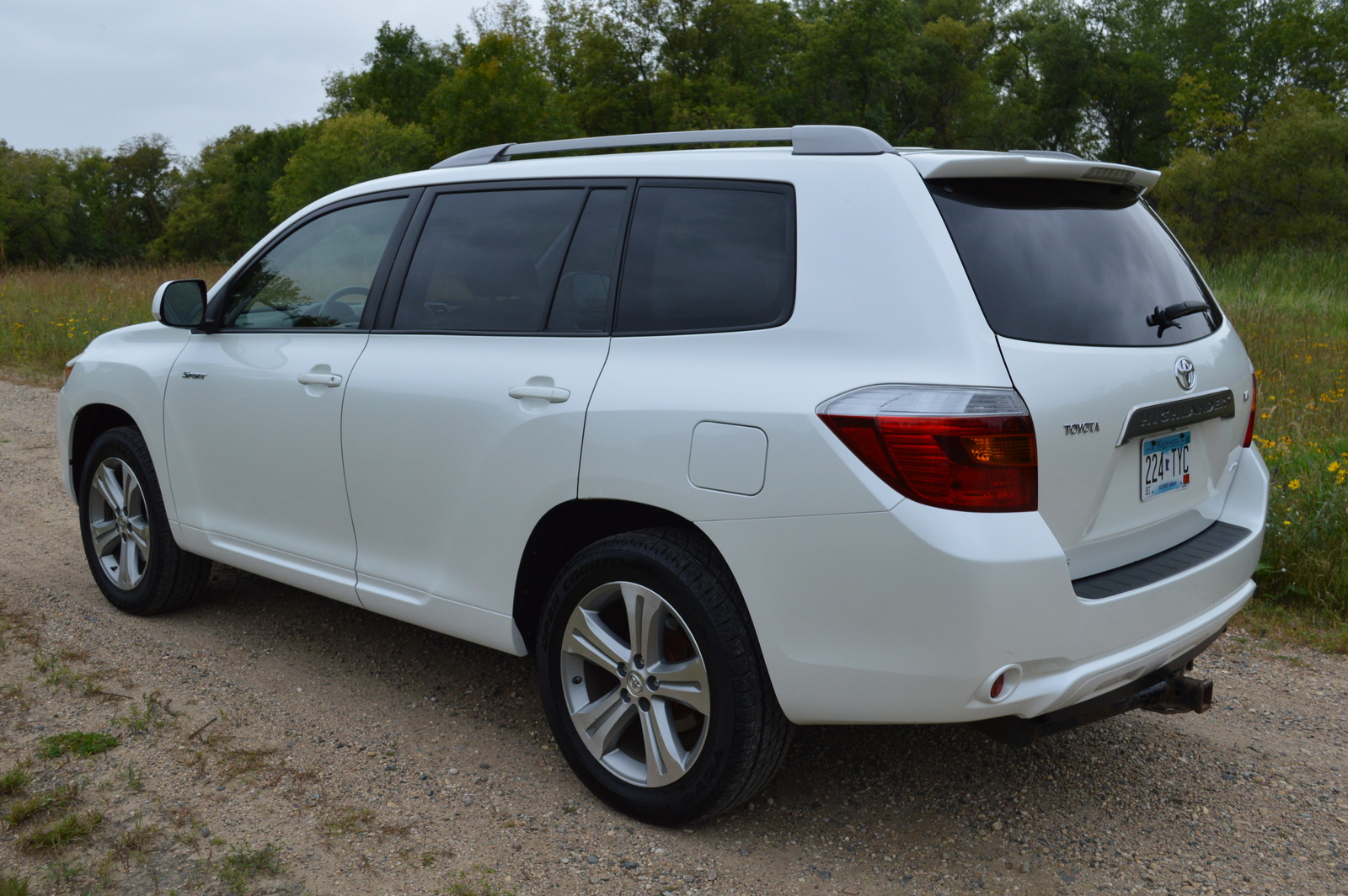 A 2008 Toyota Highlander is not cheap, with prices starting at $27,300 for a base-trim front-driver. Choose a Highlander Hybrid Limited, and you’re looking at spending almost $40,000.

Speaking of the Highlander Hybrid, it costs a minimum of $5,000 more than the V6 version, which means it’s going to take forever to recoup the extra investment in terms of savings at the fuel pump. Given the price premium, choosing the hybrid version of this SUV is all about environmentalism and nothing at all about saving money.

Most people will be happiest with the Highlander V6, in Sport or Limited trim. It is decently fuel-efficient and, if history is any indication, will prove exceptionally reliable. But that happiness comes at an up-front cost.

What's your take on the 2008 Toyota Highlander?

GuruSF698 Looking and with a tow pkg

Have you driven a 2008 Toyota Highlander?
Rank This Car

Should I Keep The Car?

It needs a paint job…no other problems….I have had it since new and maintained it perfectly. The paint job will be 2500 dollars…only 73 k miles on the odometer

5 views with 1 answer (last answer about a day ago)

Should I Keep The Car?

It needs a paint job…no other problems….I have had it since new and maintained it perfectly. The paint job will be 2500 dollars…only 73 k miles on the odometer

Something is draining my 2008 Toyota Highlander, if I don't drive it for a couple of days it won't start and I need to boost it.

Water Under Carpets, NOT A/C.

Hi, have had wet carpets front and back for a while now. Initially thought it was A/C as did mechanic, but it is not (drain tube works fine). I finally removed carpet to the back seat row to expose ...

Purchased an 08 Highlander with 134,500 on it, runs good but now I'm worried whether or not the timing chain was done (fine time to worry, after the purchase) is it a must that it gets done? Do I l...