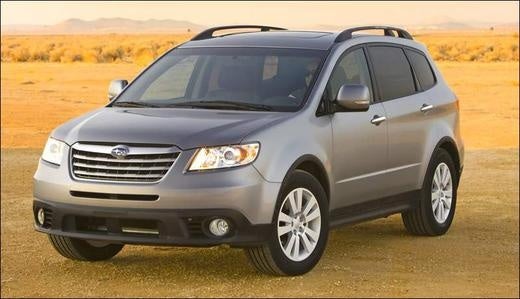 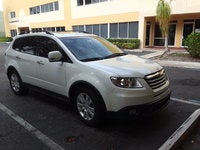 The 2008 Subaru Tribeca is a revised edition of the B9 Tribeca, the midsize SUV Subaru introduced in 2006. The B9 Tribeca never quite caught on; Subaru hopes the re-engineered and redesigned Tribeca will make more of an impact in the crossover sport utility vehicle market.

And there's been a lot of advance buzz about the 2008 Tribeca and its engine. It's still an inline 6-cylinder, but a retooling by Subaru has brought its capacity to 3.6 liters (from 3.0) and its horsepower to 254 (from 245). Torque has improved most dramatically, up to 247 lb.-ft. from 215. In addition, reviewers tout the new engine's improved fuel efficiency.

You'll also see some striking design changes in the new Tribeca. It's more squared-off, less self-consciously aerodynamic than the B9 Tribeca; that translates into a roomier interior as well as a more substantial exterior look. Both the five-passenger and seven-passenger versions offer more headroom and legroom than their predecessors.

The '08 Tribeca is available in two trims (Base and Limited) and two body styles (five-passenger and seven-passenger). 18-inch wheels and an updated automatic transmission make it more roadworthy than before; EPA estimates hold at 18 mpg city, 23 mpg highway. If you're shopping for a crossover SUV, the Tribeca might be worth another look.

What's your take on the 2008 Subaru Tribeca?

LolaJean nice and sporty, good value overall for an SUV

Have you driven a 2008 Subaru Tribeca?
Rank This Car

What could be causing these 3 lights to come on together and go out together at the same time . Check Engine, Cruise and Vehicle Dynamics Control Operation Indicator light .

Is it safe to drive 40 miles to Dealership for an inspection on this alert?

My rear differential light has been coming on and off so I had the fluids everything changed it's still it's doing it which means that the sensors probably melted a bit where is the sensor because ...

Just Purchased A Suraru B9 Tribeca 2006

Am having issues with the low beam headlights? Not sure where they are located. The high beams work ok. Are they two different lights?