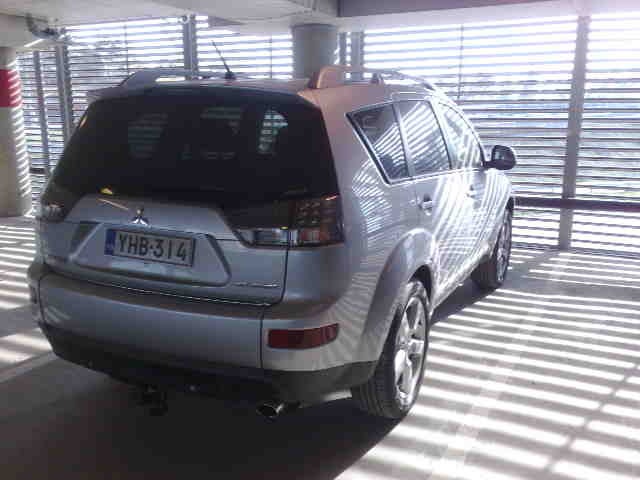 Yet another entry in the compact crossover SUV segment, the 2008 Mitsubishi Outlander tries to compete by offering a 100,000-mile/10-year warranty and a nice selection of standard features even on the base model. In North America, the Outlander remains unchanged, but in Europe it will get two new engine choices â?? a 2.2-liter, 156-hp Di-D diesel with a 6-speed manual and AWD or a 2.4-liter, 170-hp I MIVEC with a choice of 5- or 6-speed CVT.

In the U.S., the 2008 Outlander comes in three trim lines. The base ES is fueled by a 2.4-liter, 168-hp inline four and continuously variable automatic transmission. Together this powertrain delivers 23/30 mpg. The LS and XLS get the PZEV-rated (partial zero emissions vehicle rating) 3.0-liter, 220-hp V6 and 6-speed Sportronic with manual mode. All trims are offered in either front-wheel or four-wheel drive with over eight inches of ground clearance, though the 4WD is not meant for off-roading. All trims start with ABS brakes, traction and stability control, skid plates, dual front and side curtain airbags, full power features, cruise control, and a CD player. Moving up the line gets you leather trim, climate control, and a sunroof.

The 2008 Outlander seats five in two rows in the base ES, with the capacity to add two more passengers with the optional third row. This row is standard in the higher trims, but its tight legroom is not recommended for adults. The second row split-folds and reclines, and with both rows folded, cargo capacity extends from 15 to 73 cubic feet. The front passenger seat also folds to hold longer objects. With no third row, the cargo bay holds 39 cubic feet. Towing capacity reaches 3,500 pounds with the 4WD trims. Though owners are relatively happy with the power, fuel economy, and handling of the 2008 Outlander, there isn't a lot to distinguish it from the other compact SUVs on the market. The extended warranty seems to be its biggest selling point.

What's your take on the 2008 Mitsubishi Outlander?

Users ranked 2008 Mitsubishi Outlander against other cars which they drove/owned. Each ranking was based on 9 categories. Here is the summary of top rankings.

Have you driven a 2008 Mitsubishi Outlander?
Rank This Car

Dears, Recently my transmission reflects a problem when shitfing to D from park position. The car simply doesn't move as if the gear was in "N"eutral position. It works only after shifting to R and ba...

i have a 2008 mitsubishi outlander. the car has check engine lights and the only code that shows up is P0420 catalyst below threshold. that is the only code...so i replaced my cars catalytic convert...

My Car Has A Locking System That Can Be Operated With An Exterior Button On...

Typically I can open the driver and passenger door and rear door without using a key fob. The fob only has to be in a pocket or purse and near the door. The front doors have an exterior button to ...

How much should it cost to replace hose to manifold that is leaking coolant?

I have a 2008 Mitsubishi Outlander XLS V6 6 Speed Transmission it currently has 120,000 miles the transmission fluid has never been changed, should I change it now or leave it alone because it wil...