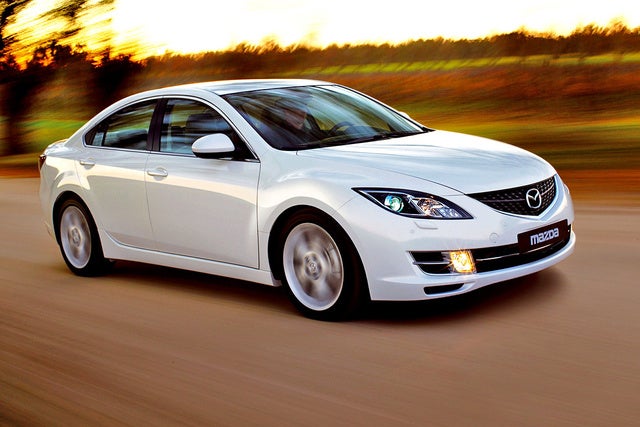 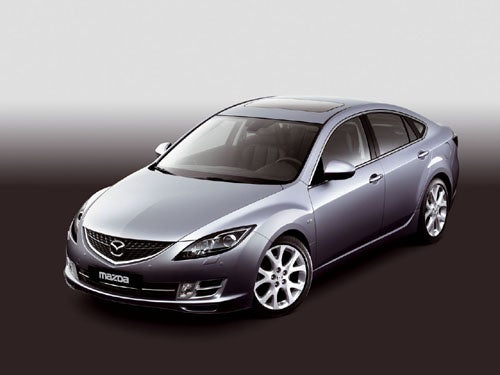 Dropping the Sport Wagon and MazdaSPEED6 this year, the 2008 MAZDA6 maintains its most popular trims with few changes. Although still behind the pack (Accord, Camry) in terms of sales, the MAZDA6 remains one of the sportier and more stylish sedans and hatchbacks on the market. For 2008, all trims receive 17-inch wheels with a new tire monitor. The Touring and Grand Touring come only with a six-speed automatic transmission, and the Touring gets a standard Bose sound system.

Available in sedan and hatchback body styles, the 2008 MAZDA6 comes in five trim levels: Value Edition, Sport, Sport Value, Touring, and Grand Touring. Within these categories, the MAZDA6 comes as either an i or s, depending on the engine choice. The i has a 2.3-liter, 156-hp inline four that gets 21/28 mpg, while the s gets a 3.0-liter, 212-hp V6 that gets 18/25 mpg. A five-speed manual and a five-speed automatic are the available transmissions, with the Touring and Grand Touring offered only with a six-speed automatic. Although some feel MAZDA6s are underpowered, the chassis, steering, and overall handling give the 2008 version a sporty feel on the road. Both the sedan and hatch earn five and four stars in crash tests, thanks to standard ABS brakes, traction control, and dual front-side and side curtain airbags. Stability control is not offered.

Sport models start with full power features, a CD player, and cruise control, and as you move through the lineup you add power front seats, a CD changer, leather upholstery, and heated seats. The Grand Touring sneaks in sporty touches such as xenon lamps, foglights, and a sunroof. There are few options available for any trim. Rear seats split-fold in both the sedan and hatch, and the 2008 MAZDA6 is notable for its abundant cargo space. While the sedan holds an average 15 cubic feet, the hatch starts at 22 and expands to 59 cubic feet. Consumers agree that the 2008 MAZDA6 is sporty in looks and handling, and they feel the overall driving experience is smooth and fluid. Downsides include the so-so fuel economy and a cramped back seat in terms of both leg- and headroom.

Have you driven a 2008 Mazda MAZDA6?
Rank This Car

How do I disdable or remove an alarm out of a 2008 Mazda 6. Everytime I go to work and unlock the car the alarm will go off or it will go off just randomly. I’m scared to unlock my car in the Main...

Why Does My Car Just Shut Off And Won’t Crank ?

I have an2008 Mazda 6 and it keeps just turning off on me . I’ve took it to the shoot they checked my alternator I got a new battery and starter it was none of the above !!! It just shuts off can’...

My Interior Lights Are Giving Trouble

Hi people, I have a 2008 luxury sport Mazda 6 and the interior lights come on by themselves and I cant find any switches where the doors close. any help would be much appreciated , thanks.

20 views with no answers yet

Car has a draw, Mazda 6 wasn't used for a couple days. So dead. Charged I yr old battery tests good, but won't start

34 views with 3 answers (last answer about a year ago)

Is This A Rust Issue On Under The Mazda Atenza?

After looking under the Atenza it looks to me likes there might be some rust on the pipe in the middle of the photo. ( the Dots) is this a biggy or just standard for a 10 year old car? I'm thinkin...