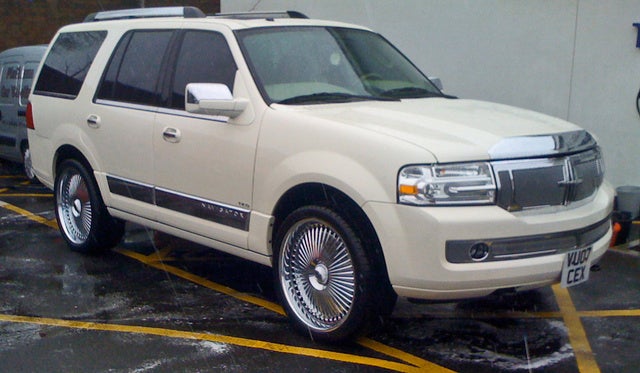 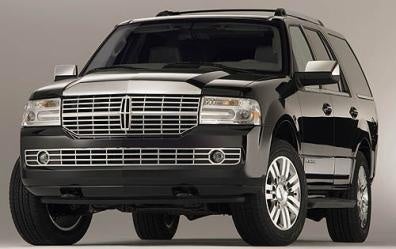 You can take it with you. Especially if you're driving a 2008 Lincoln Navigator, a luxury full-size SUV that seats up to eight people, has up to 103 cubic feet of storage space, and can tow around 8,000 pounds. For 2008, the Navigator turns some former options into standard features, including a power liftgate, a power-folding third row, heated and cooled front seats, and a 14-speaker THX surround-sound system. A rearview camera is a new option this year.

The Navigator comes in two trims â?? Base and L, which adds 15 inches of length and 25 cubic feet more cargo space. All trims are available in either rear-wheel drive or four-wheel drive. The 4WD system has several settings, ranging from default rear-wheel to part-time to full-time, and comes with both high- and low-range gearing. If you don't mind getting the stylish Navigator dirty, it can be taken off-road. Its 300-hp, 5.4-liter V8 and 6-speed automatic get a mere 12/18 mpg, but 2007 revisions have improved handling and reduced road noise to keep passengers safely insulated from the real world. ABS brakes, traction and stability control, dual front-side airbags, and side curtain bags for all three rows are standard. Both second and third rows fold flat, and with all seats up, the cargo area holds 18 cubic feet. Reclining standard second-row captain's chairs can be replaced with a bench, upping the seven-passenger capacity to eight.

New owners of the 2008 Navigator love its quiet ride, interior space in the third row (an independent rear suspension lowers the floor and adds more legroom), and extensive luxury equipment. The biggest gripe, aside from low fuel economy, is the lack of power when compared to comparably sized SUVs.

What's your take on the 2008 Lincoln Navigator?

Users ranked 2008 Lincoln Navigator against other cars which they drove/owned. Each ranking was based on 9 categories. Here is the summary of top rankings.

Have you driven a 2008 Lincoln Navigator?
Rank This Car

Need to track the person who bought my car in December 2021. Apparently he has not put the car in his name. Got a red light for none stop. ( ticket ) I have his information on the old email

How Regulate The Headlights (up & Dwon) In 2008 Linconl Navigator

Just bought a 2008 Lincoln Navigator. When I put my ac on highest fan setting it cuts off then comes back on then cuts off again . It keeps doing this . I changed my Resistor . It is still having t...

How Long Typically To Sell A Vehicle On Site?

Typically how long of a time period does it take to sell a car? I need trade in to purchase car from website, how does that work? Trade in must be secure prior to onsite purchase?