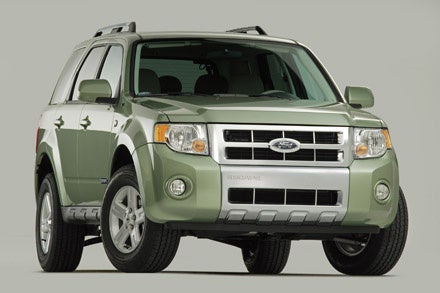 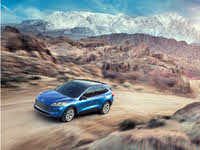 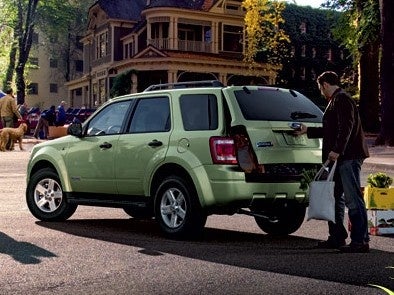 The 2008 Ford Escape Hybrid got a makeover for its third birthday. And it was just in time for the spotlight, too: The '08 Escape Hybrid has grabbed headlines as the face of New York City's hybrid taxi initiative.

It's a terrific choice to spearhead a push for greener taxis. The 2008 Escape Hybrid has a roomy interior, which (thanks to the new design) is more rugged than ever. And its EPA fuel economy estimate of 36 miles per gallon in the city makes it more than twice as efficient as the current taxi fleet.

But what about the rest of us who just want a midsize SUV that's easy on the wallet and the environment? Well, the good news is that the '08 Escape Hybrid is more comfortable than ever, with a spacious cabin, plenty of legroom and cargo capacity, sustainable seat fabrics made from recycled materials, and ice-blue lighting on the dash. A top-of-the-dash multimedia center is also part of the package.

The bad news? It's still quite a bit more expensive than its traditionally fueled Escape counterpart. But over time, you may be able to recoup some of that investment, thanks to the Escape Hybrid's fuel-saving powerplant. It consists of a compact electric motor, which can power the vehicle alone at speeds up to 25 miles per hour, and a fuel-efficient 2.3-liter four-cylinder Atkinson Cycle engine.

Other hybrid-related technologies include an electronically controlled continuously variable transmission (eCVT), which results in seamless acceleration, and regenerative braking, which generates electricity when you apply the brakes to recharge the battery. According to Ford, the hybrid powerplant produces 70 percent better fuel economy in the city than a traditional gas-fueled four-cylinder Escape.

Among the options is an Intelligent 4WD system.

What's your take on the 2008 Ford Escape Hybrid?

Have you driven a 2008 Ford Escape Hybrid?
Rank This Car

my car is at about 100k km i bought few years ago and yesterday i was driving and randomly said stop safely now and went into battery mode (i have a ford escape hybrid) this happened to me about ha...

Hello Edson, Is There Any Way You Can Make This Suv Work?

Hello Edson . . . I took the liberty to find the exact SUV I want- the price is right and everything. Is there any way you can make this work? CARFAX.com Price$4,495 Mileage137,161 miles Location...

Wife tried to start her car but engine didn't crank/start. Thought the OEM battery died, but the lights came on bright. Could the lights somehow run off the Hybrid battery? could the voltage on the 1...

I Have A 2008 Ford Escape Hybrid. I Just Returned From Vacation For A Month...

This is the 2nd time this has happened. Took it to the dealer first time and they charged me 178.00 to recharge the hybrid battery. Is this the same problem and how do I keep it from happening agai...

The car worked fine until we changed the battery afterwards, it seems the anti theft kicked in and now it won't start. The car battery is new. The lights and everything works but But it won't start ...

122 views with 2 answers (last answer about a year ago)