The Cadillac CTS has the looks, feel, and price, but it falls just short of being a BMW replacement. 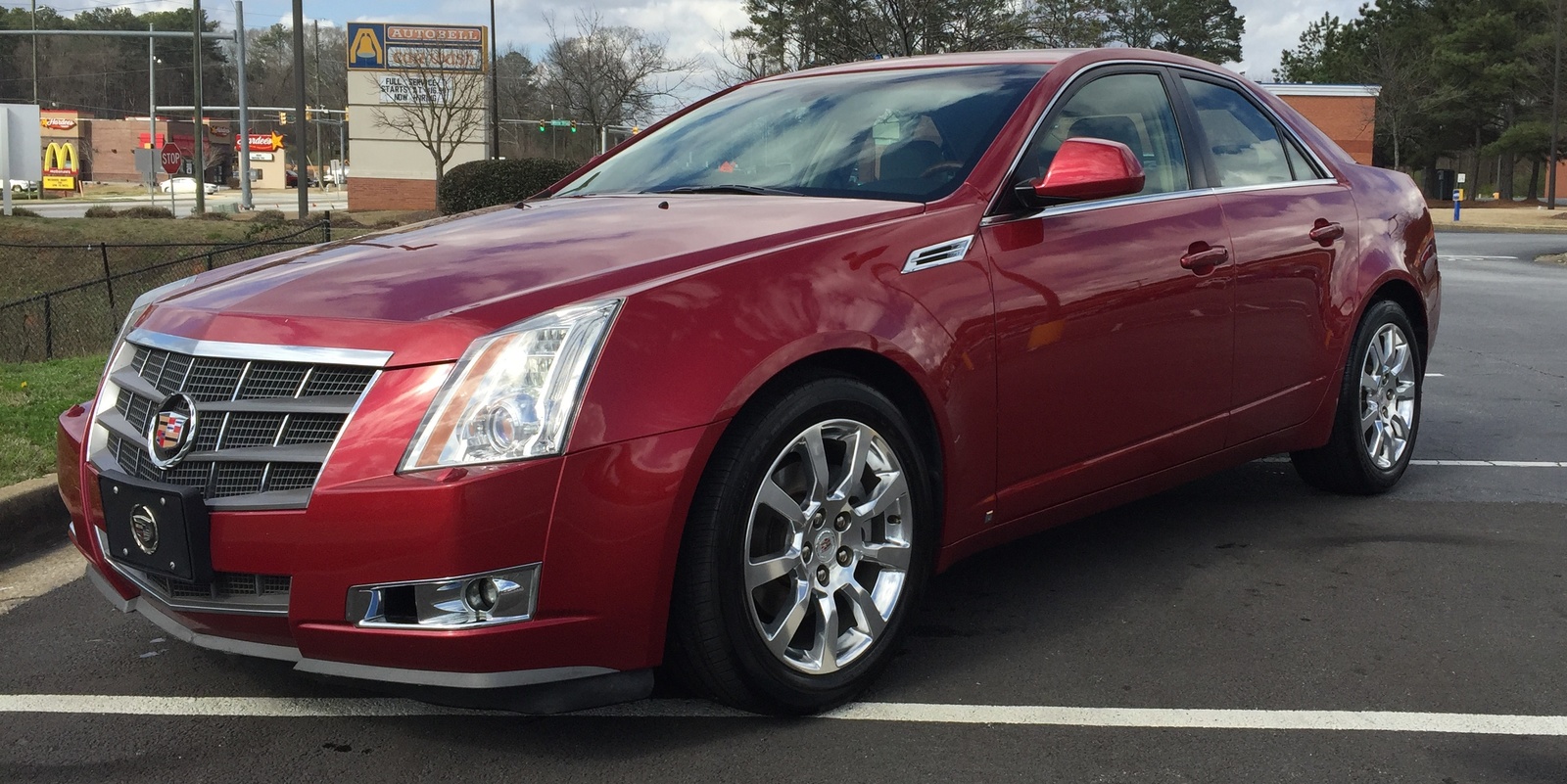 The CTS has been around since 2003, but it has gotten a major facelift and brand-new interior for 2008. Although it’s close in size to other midsize luxury sedans, the CTS is priced like a smaller car. This year, a new 3.6-liter V6 with direct injection and 304 horsepower is available. A carryover version of the same engine is also available but features a lower output of 264 hp. The CTS is also available with all-wheel drive (AWD) for the first time this year. 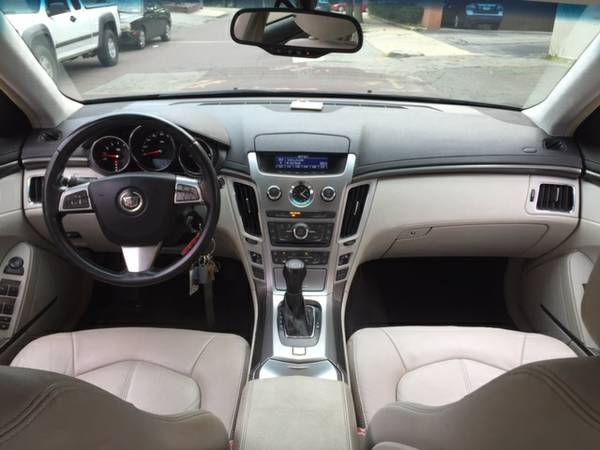 This CTS looks an awful lot like the last version, but that’s a good thing. The large Cadillac grille is sharper than previous iterations, and the large headlights accent the front fascia well without looking “froggy” or bulbous. The CTS’ profile appears longer than it is, thanks to straight accent lines and a lightly curved beltline. There’s more going on around back than almost anywhere else on the car, with a Cadillac badge and model designation logos joining a thick chrome accent piece on the trunk lid.

On the inside, the CTS exchanges clean lines for a busy and flashy center stack. The wood accents and silver trim add a decidedly grown-up feel to the small luxury sedan’s cabin. 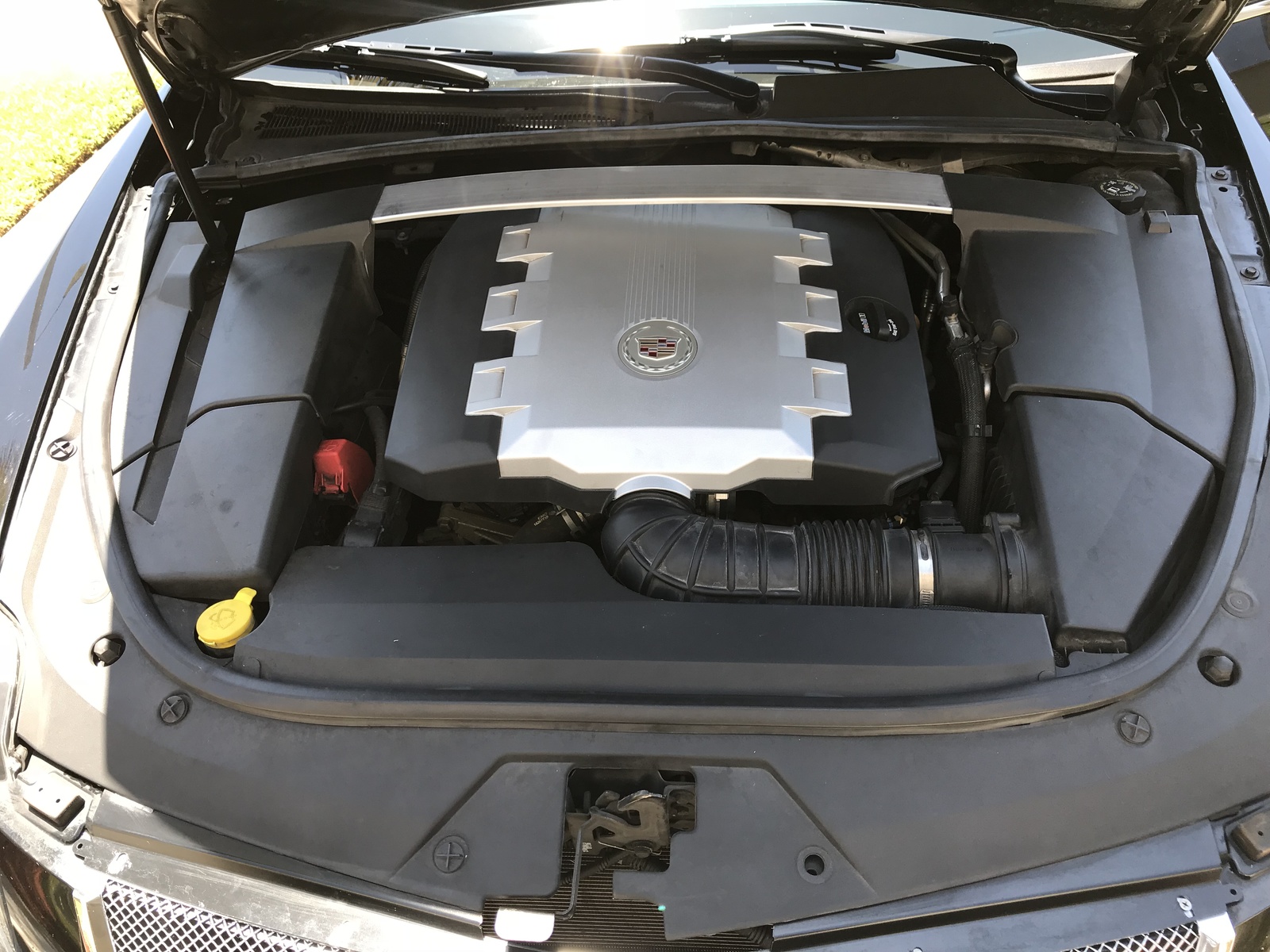 The CTS handles like a dream but is noticeably slower than competitors, even when equipped with its most powerful engine. That’s due in part to its heavy weight. That said, the car still feels lively and powerful enough to classify as a sport sedan. Sharp steering and a confident but comfortable ride help the Cadillac hold its own in a steeply competitive segment.

Both the 263-hp and 304-hp engines are available with either a 6-speed manual or a 6-speed automatic transmission. The base engine, despite being less powerful, does not gain much on its more powerful counterpart in way of fuel economy. The lesser engine is rated at 18 city, 26 highway, and 21 combined, while the more powerful engine is rated at 17 city, 26 highway, 20 combined. Those numbers both change to 16 city, 25 highway, and 19 combined with a manual transmission. 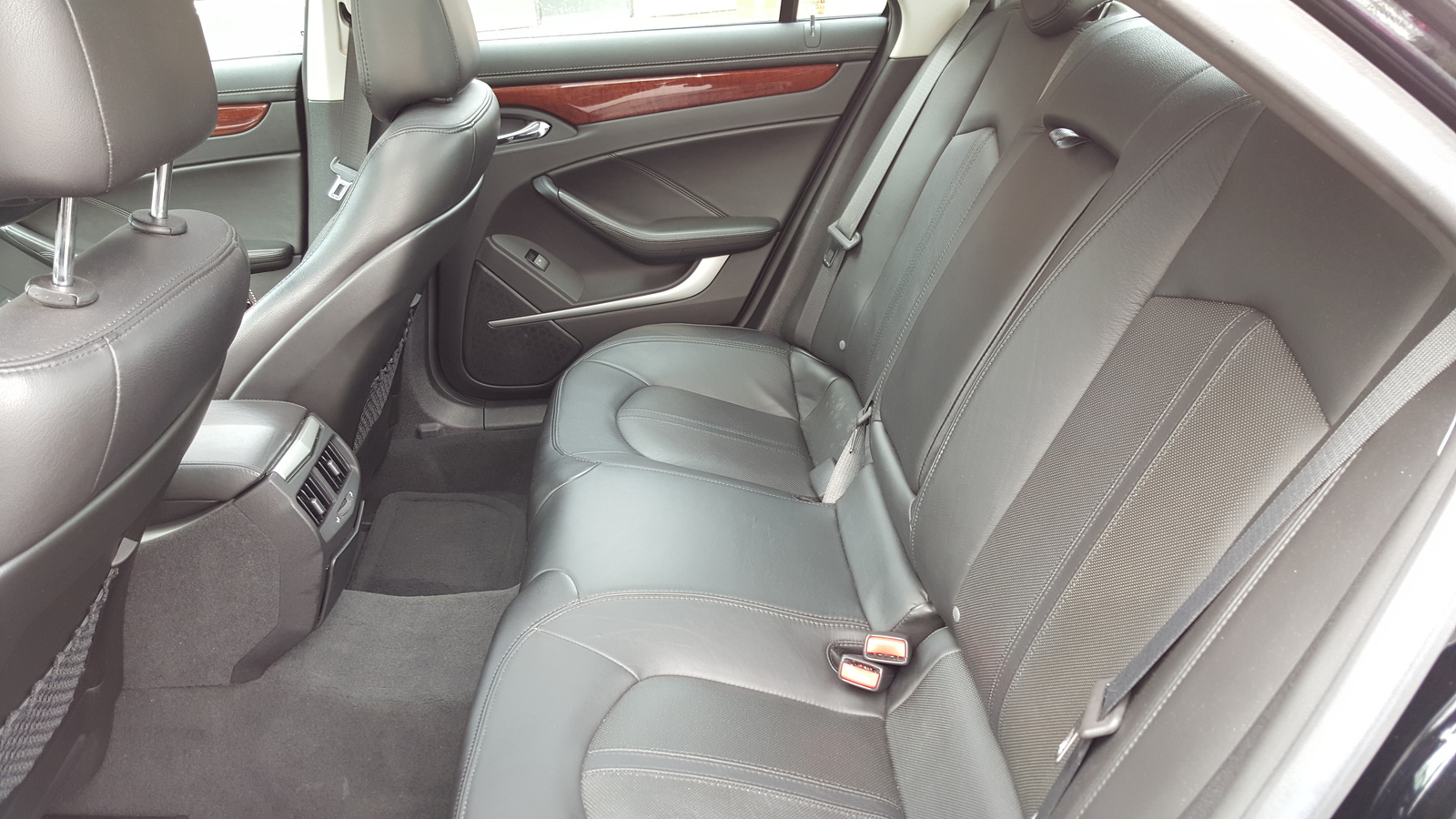 The CTS may feel like a German sport sedan, but its over-stylized interior screams Americana. Wood, metal, stitched leather, and plastic all meet to create a number of funky angles and gaps throughout the cabin. Even so, the interior feels cohesive and well put-together. It's just shy of the experience provided by the car’s more expensive German rivals.

Cadillac bestowed the CTS with a lot of buttons and controls in the center stack, and every single one feels premium. The optional navigation system rises on a screen in the upper dash, and when lowered, it leaves a small display open for controls.

Backseat passengers are not treated to the same flash and bold styling that the front-seat passengers see, but the rear cabin area is comfortable and uncluttered. The CTS’ trunk inches past competitors’ at 13.6 cubic feet, and a 60/40 folding rear seat opens that up even further. 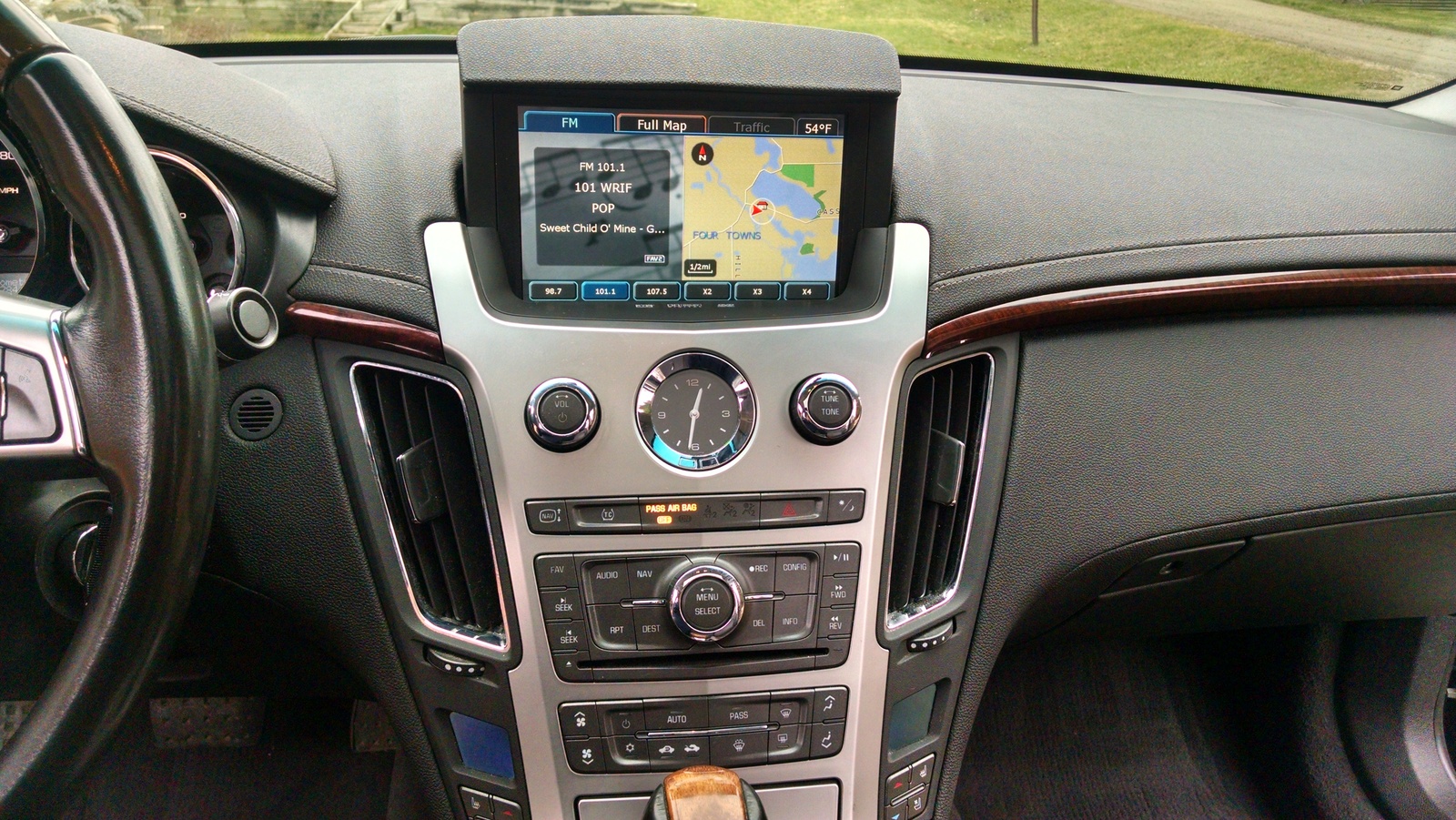 The CTS comes with an audio memory system, which lets users upload CDs and store them on a hard drive in the car. The system can even record up to 60 minutes of over-the-air live audio. However, the car lacks Bluetooth, which means that cellphone connections are a no-no, though most dealers do offer an aftermarket Bluetooth upgrade. There’s also an eight-speaker Bose stereo onboard.

The navigation system integrates with XM radio traffic data to display real-time traffic flow info in metro areas. The system can rear upcoming street names and has a full database of points of interest to help guide the trip.

The 2008 Cadillac CTS earned a Top Safety Pick from the Insurance Institute for Highway Safety (IIHS). That included “Good” ratings in all crashworthiness categories. Standard safety equipment includes four-wheel anti-lock disc brakes, traction control, electronic stability control, six airbags, and side curtain airbags for both rows. Adaptive headlights, which can turn up to 15 degrees in the direction of a curve, are optional. 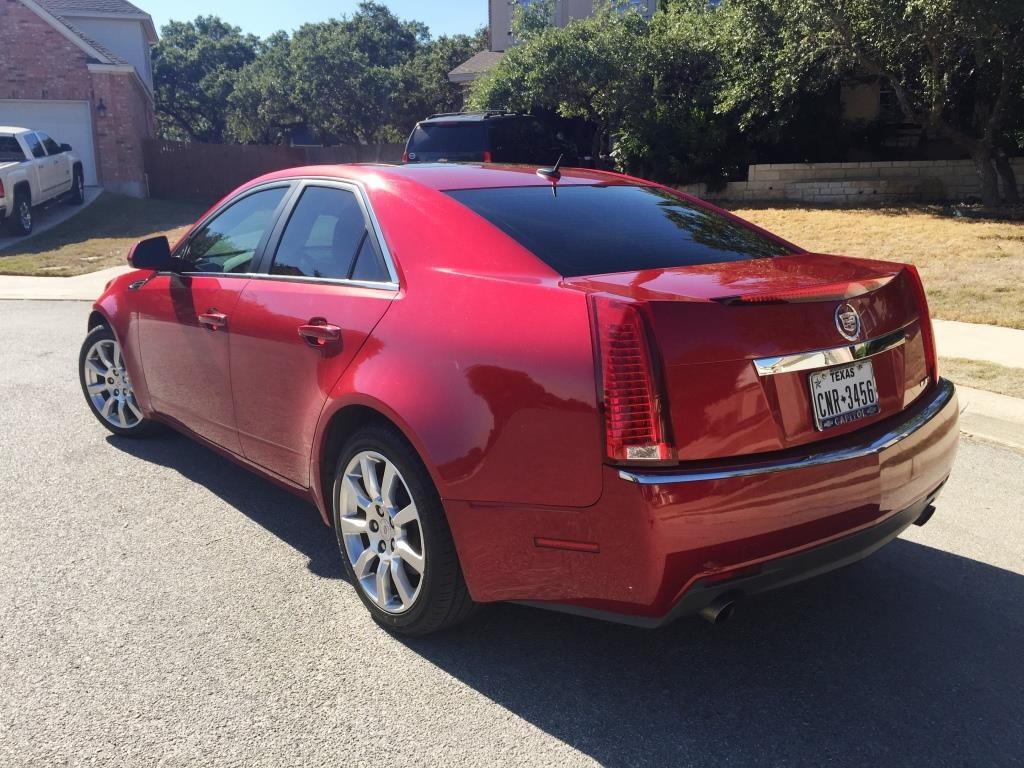 The CTS’ starting price of $32,245 seems like a bargain in the midsize luxury segment, and it is. The Bose stereo, dual-zone climate controls, power driver’s seat, premium synthetic leather upholstery, and 17-inch allow wheels are all high-end features that land at a relatively low starting price.

A totally loaded model reaches around $50,000, which is well into premium car territory. That price tag puts it head to head with a nicely-equipped BMW 3 Series or Mercedes-Benz C-Class, which is a tough place to be for the CTS.

Sharon I agree with this review!

Users ranked 2008 Cadillac CTS against other cars which they drove/owned. Each ranking was based on 9 categories. Here is the summary of top rankings.

Have you driven a 2008 Cadillac CTS?
Rank This Car

7 views with no answers yet
10

Frankie asked a 2008 Cadillac CTS 3.6L AWD General question about a month ago

I'm getting a Theft Attempted message on my dashboard. I accidentally left the window open last night. What exactly does this mean? What triggers this message? Is there something I need to do?

2 views with no answers yet
10

I'm having an issue with my 20008 Cadillac CTS. The automatic lights keep coming on in the daytime and they won't shut off when I shut the car off. I'm worried that it's going to drain my battery....