In its final year before a complete redesign, the 2008 Audi A4 continues to offer more variety than the competition. 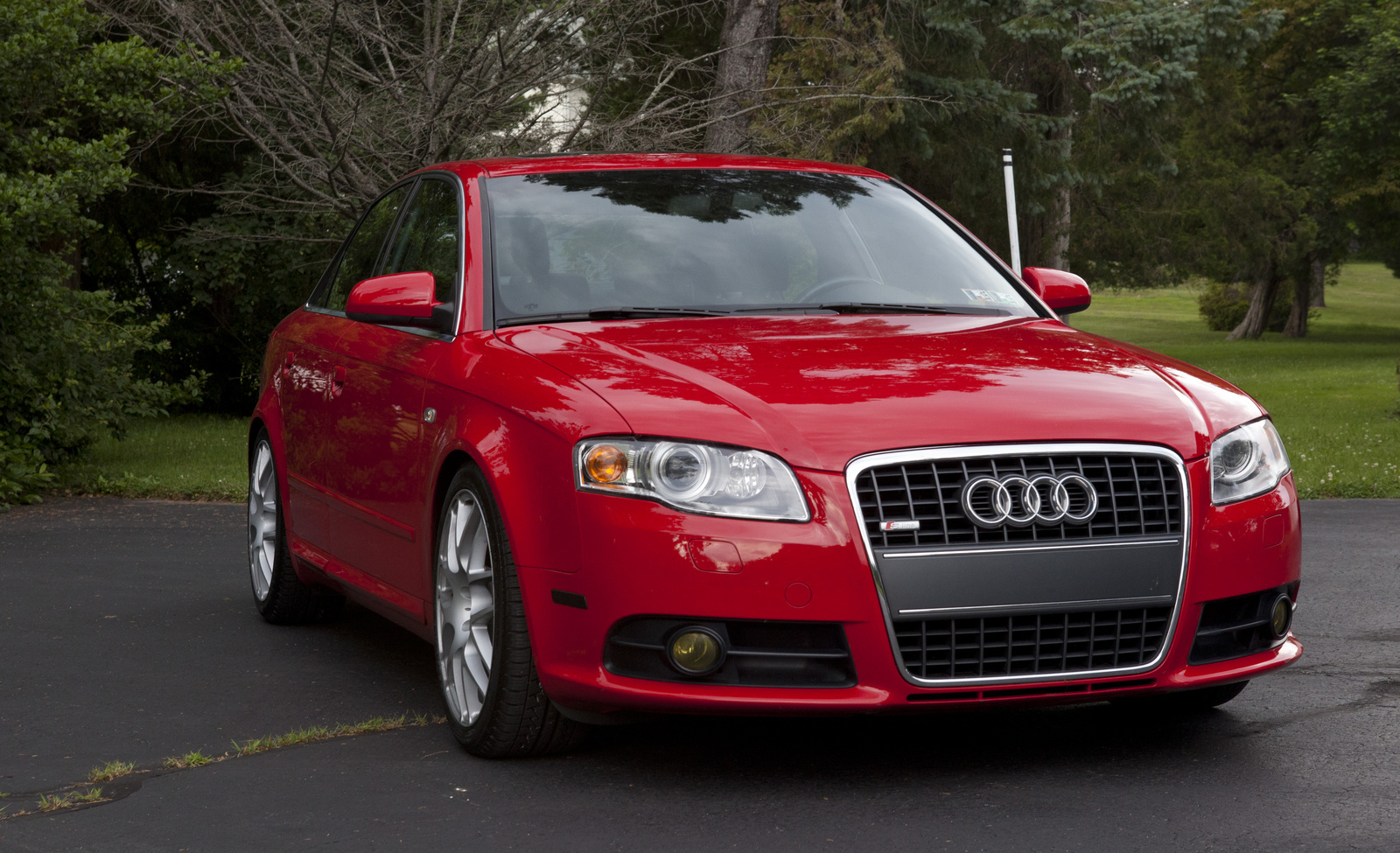 Positioned one rung up the entry-luxury ladder from the Audi A3 hatchback, Audi offers the 2008 A4 in 2-door convertible, 4-door sedan, and 5-door station wagon body styles. The wagon, called the A4 Avant, is covered separately. You can also learn about the V8-powered and performance-tuned Audi S4 variants in a separate article. The high-performance Audi RS4 is discontinued for 2008.

Why cancel one of the great driver’s cars of the modern age? Well, 2008 is the final year for the current A4 sedan in advance of a complete redesign. The A4 convertible’s redesign is delayed until 2010.

Changes for both body styles are limited to standard S-line exterior trim and an available iPod interface, while the convertible includes heated front seats at no extra cost. An A4 Special Edition sedan arrived mid-way through the year, equipping the car with upgraded wheels, paint, and in combination with all-wheel drive, leather seats that were heated up front. 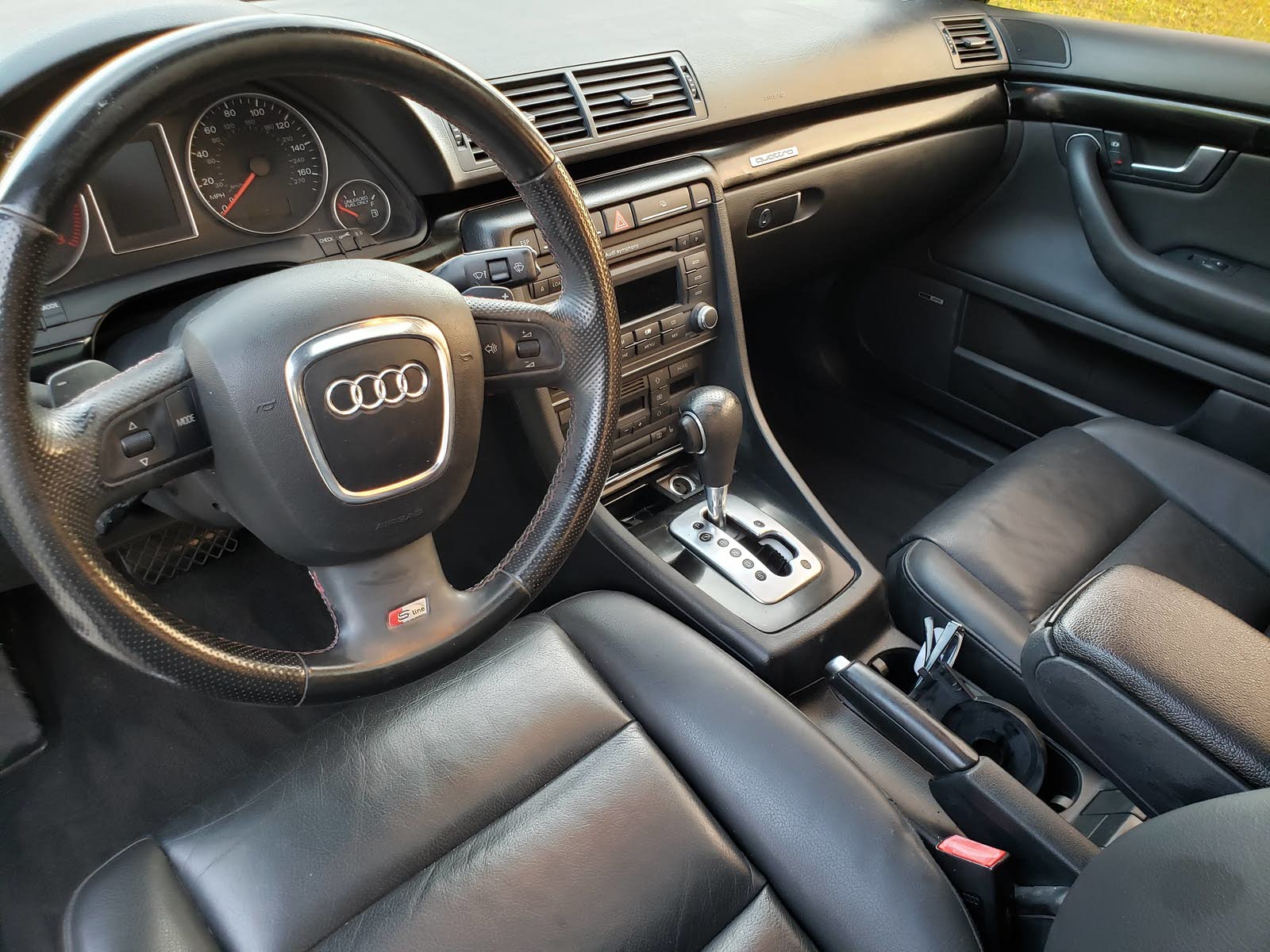 Because of its front-wheel-drive platform, the 2008 Audi A4 carries plenty of visual weight over its front axle, giving the car ungainly proportions compared to rear-drive rivals like the BMW 3 Series, Infiniti G37, Lexus IS, and Mercedes-Benz C-Class. Otherwise, the A4’s simple and technical design themes have aged gracefully since the car’s last complete redesign for the 2002 model year.

Both the A4 convertible and A4 sedan feature premium interior materials and tastefully restrained detailing. Subtle interior differences exist between the two body styles, most notably the round rather than rectangular air vents that give the drop-top a sportier flair. Cloth seats are standard in the sedan, while the convertible includes leather upholstery. 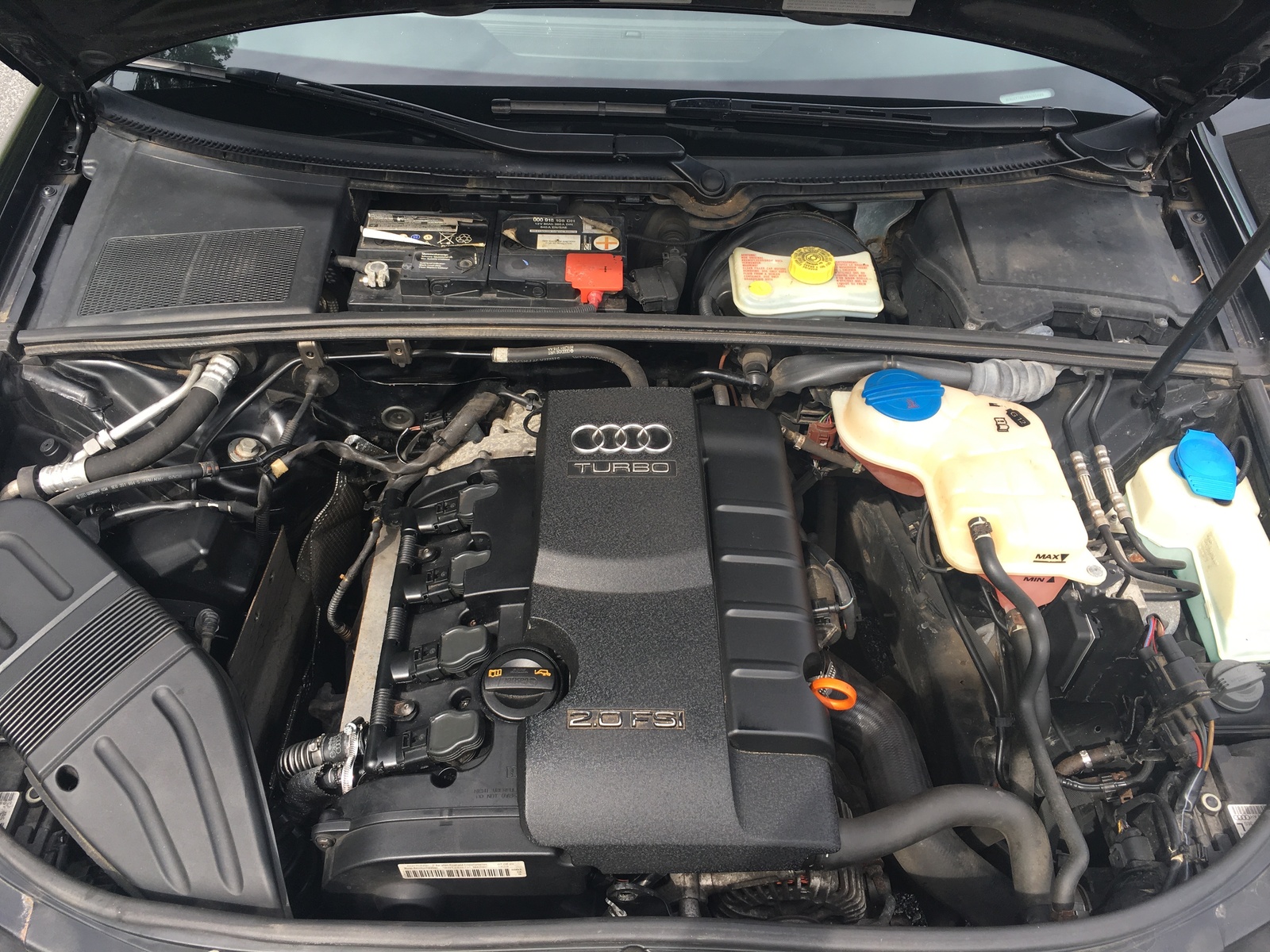 With the sedan body style, both engines are offered with front-wheel drive. Choose the convertible, and the V6 is paired with only Audi’s Quattro all-wheel-drive system. Quattro is an option with both engines in the sedan, and with the turbocharged 4-cylinder in the convertible.

Turbocharged A4 models with front-wheel drive use a continuously variable transmission (CVT). Add Quattro, and you can select between the 6-speed manual or 6-speed automatic transmission.

No matter which drivetrain you get, the 2008 A4 lacks power when lined up against its primary competitors. However, traditional German driving dynamics and the torque-distributing Quattro AWD help to make up for it, especially when the snow flies. For maximum handling and responsiveness, get the S-line Sport Package for its sport-tuned suspension. 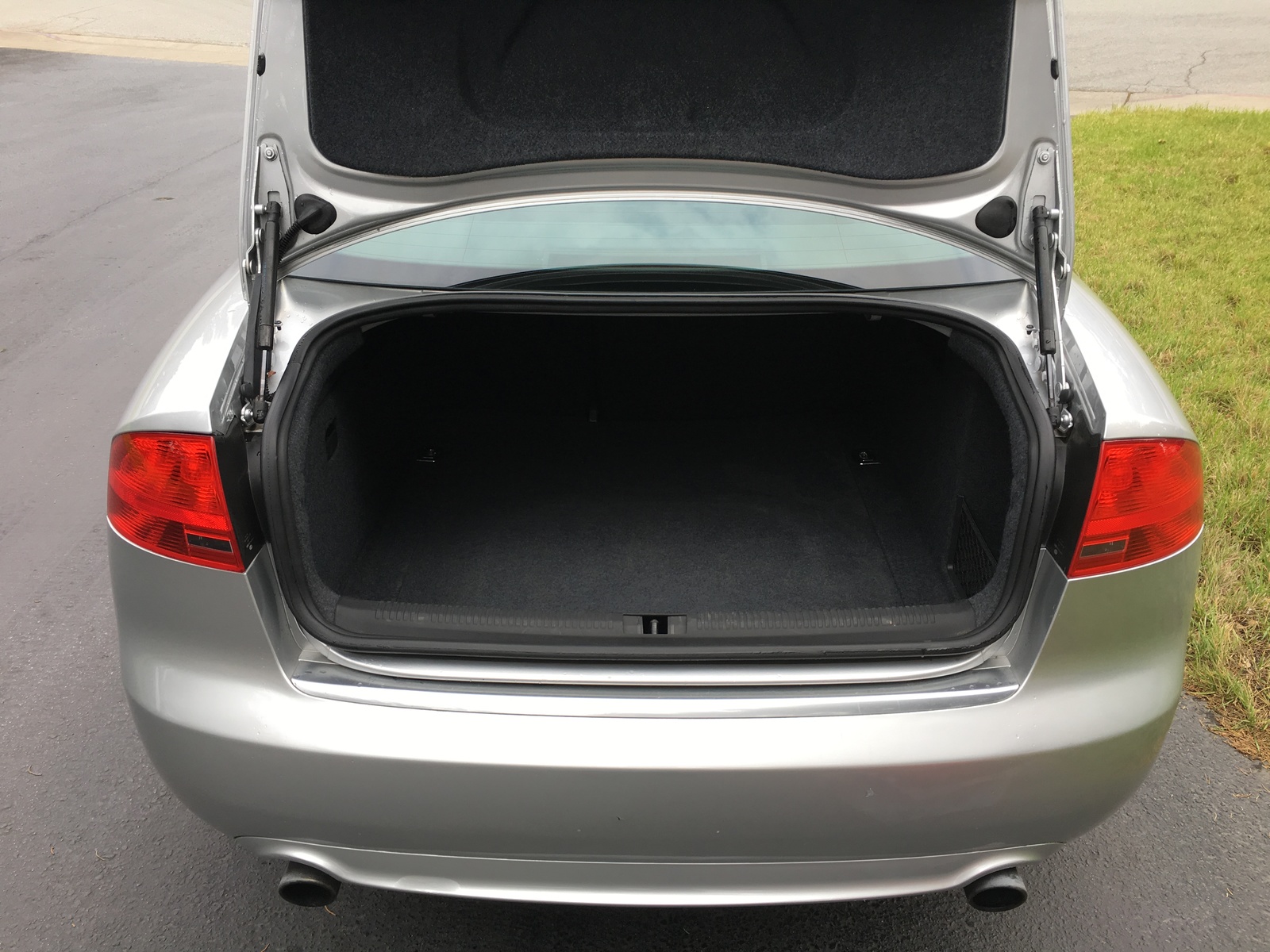 Thanks to a standard 8-way power-adjustable driver’s seat and a tilt/telescopic steering wheel, it’s easy to find a comfortable position in the Audi A4. Front passengers enjoy a manual seat-height adjuster, and heated front seats are available for the sedan and standard for the convertible.

Both body styles have small back seats. In the A4 sedan, this is more problematic, given the car’s role. In the A4 convertible, the two rear seats make it more practical than most open-air automobiles.

Interior storage is fairly limited. Aside from the cupholders, a small bin under the center armrest, and narrow door panel bins, the glove compartment is your primary spot in which to stash stuff.

Trunk room is typical of the compact luxury sedan class, at 13.4 cubic feet. The A4 convertible carries 10.2 cu.-ft. of luggage, even with the fabric top lowered. 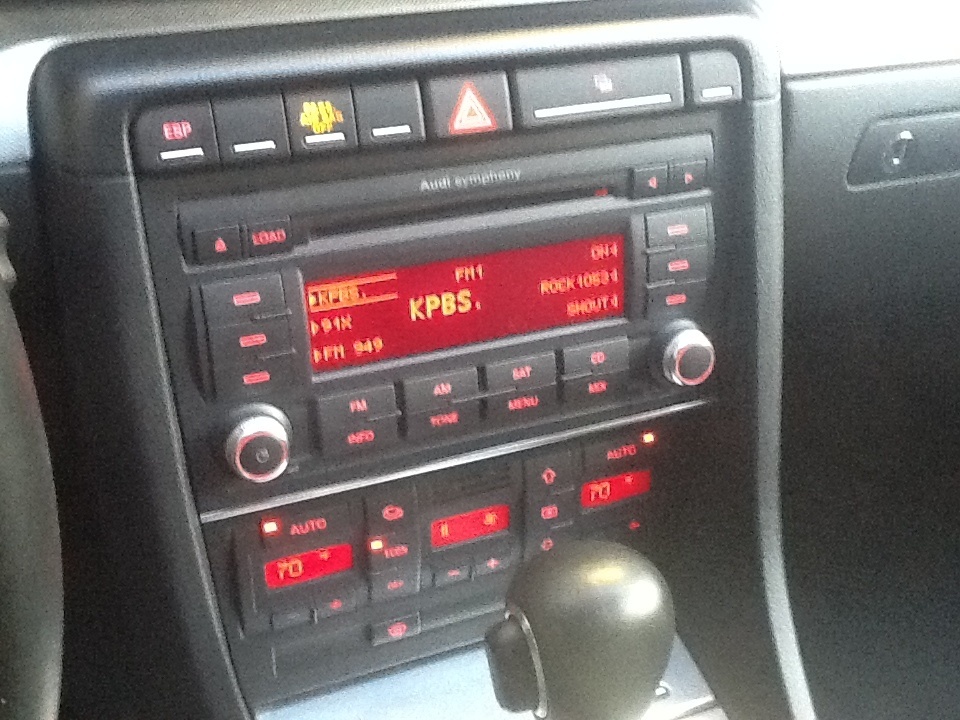 Equipped with a 6-disc CD changer and an MP3 player, the A4’s stereo includes a total of 10 speakers. Upgrades include Bluetooth hands-free calling, an iPod connection, satellite radio, a Bose premium sound system, and a navigation system. With navigation, a larger dashboard display screen shows the map and other infotainment data. 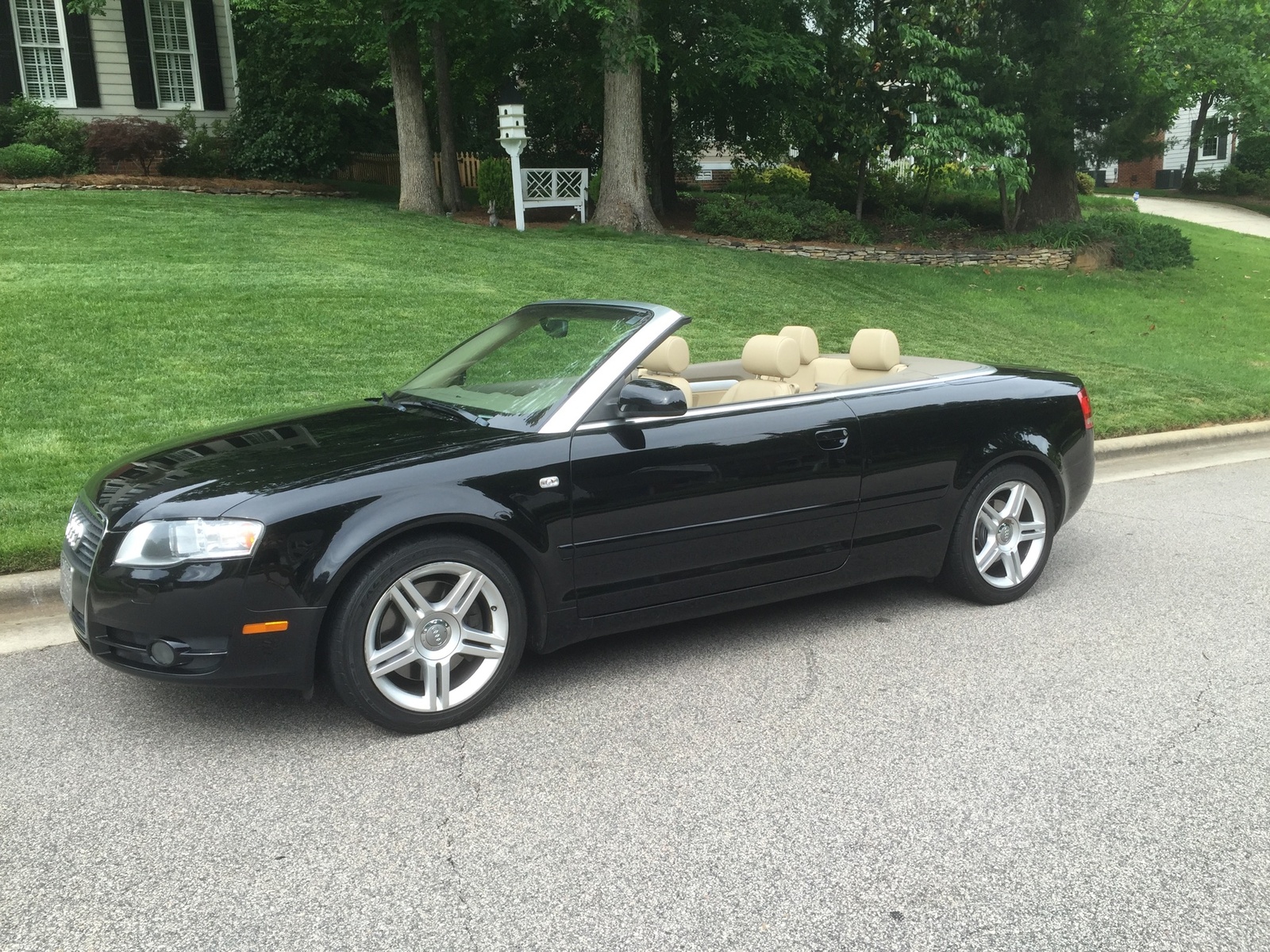 Every 2008 Audi A4 also has stability control, which can help the driver to correct a skid and avoid a collision. If the technology is unsuccessful, rest assured the A4 will do its best to protect you. The sedan earns a Top Safety Pick rating from the Insurance Institute for Highway Safety (IIHS) and gets a mix of 4-star and 5-star crash-test ratings from the National Highway Traffic Safety Administration (NHTSA). 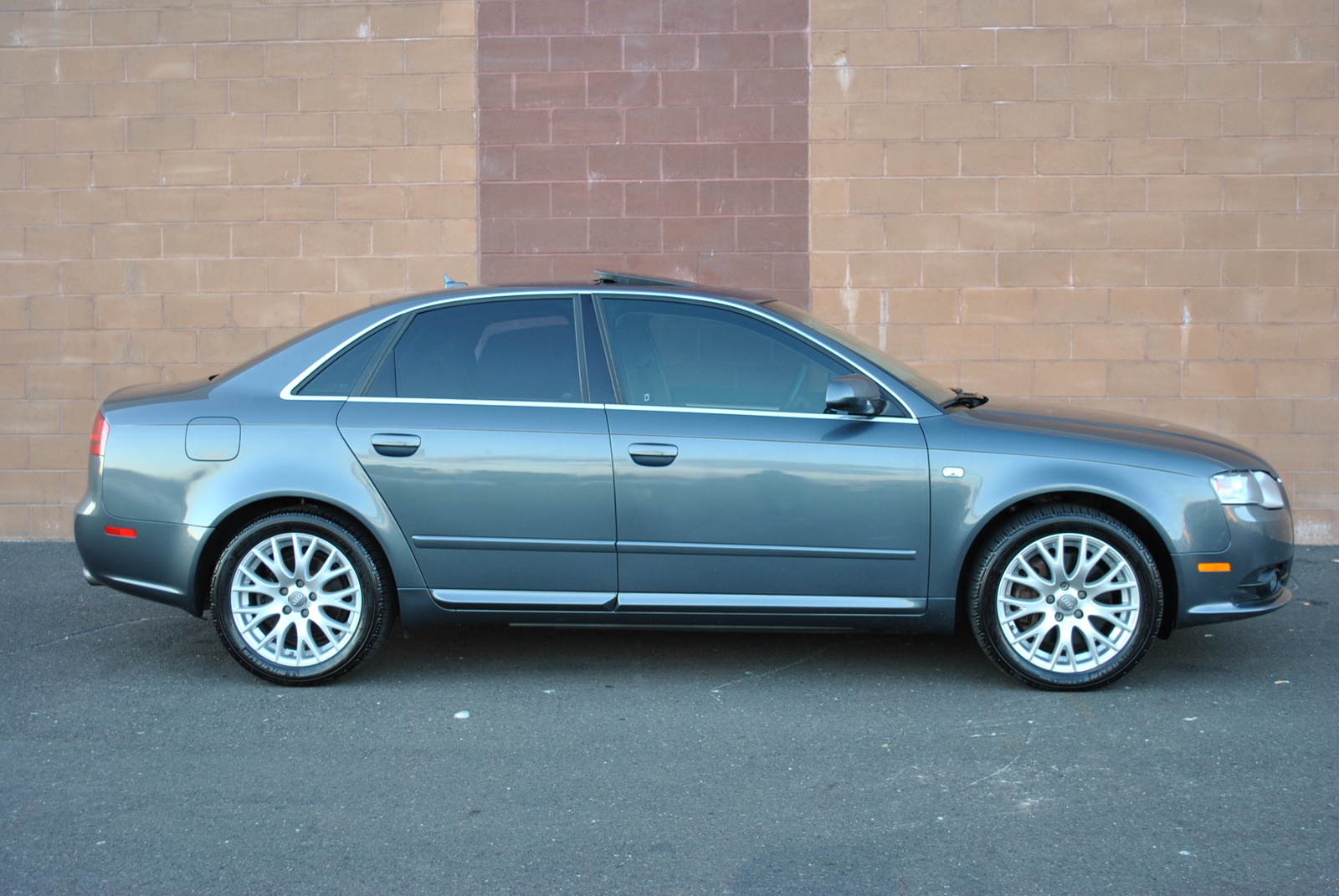 Still, with far fresher engineering and technology, the more expensive BMW 3 Series, Infiniti G37, Lexus IS, and Mercedes-Benz C-Class might just be worth the extra cost.

Users ranked 2008 Audi A4 against other cars which they drove/owned. Each ranking was based on 9 categories. Here is the summary of top rankings.

Guru9SCCD5 asked a 2008 Audi A4 General question 2 weeks ago

How Do I Remove A Car From The Site?

I THOUGHT I ENTERED MY AUDI A4 CONVERTIBLE BUT I CAN'T FIND IT!

For the past couple of weeks my car has been taking a slight bit longer to start in the mornings. I wrote this off to colder mornings. This car is normally parked in a garage but I left it outside...

Drove car home from work with no problems. Went out an hour later and car wont turn over to start. Battery is not dead. All lights on the dash work. Any ideas? We hooked it up to an OBD but didn't s...