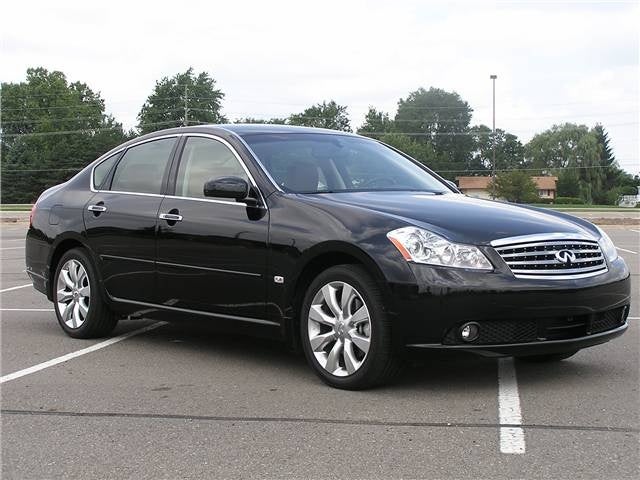 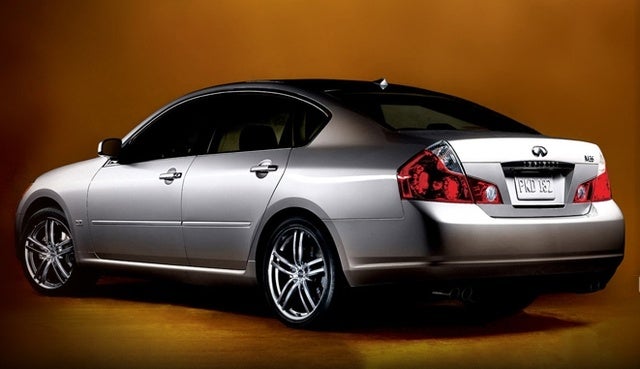 After notable changes in 2006, Infiniti gave the M35 a more cosmetic touchup for 2007. New standard features include Bluetooth technology, 10 way power front seats, power sunroof, an improved vehicle status console with 7" LCD screen, leather seats, and a 6 disc changer in the dash that can also play mp3's. The technological updates complement the basic features that have made the M the most modern midsize luxury sedan in the Infiniti lineup.
The M35 comes in 3 trims: the Base sedan, the Sport sedan, and AWD. All 3 use a 3.5 L, 275 hp V6 engine with 5 speed automatic transmission. The Base and Sport sedans get you 18 mpg in the city, 25 on the highway while the AWD gets you 17 mpg in the city, 24 on the highway. Each trim has 4 doors and seats 5. Standard features include air conditioning, power windows, power door locks, ABS brakes, traction control, and stability control with optional navigation system. Expect to find close to 15 cubic feet in the trunk to fill with junk.
Overall, reviewers could use a slightly quieter ride and more intuitively designed interior. On the other hand, drivers agree that you'll have a tough time finding superior power, handling, performance, and comfort. The 2007 Infiniti M35 has helped modernize the lineup and fill the void left by the discontinued Q45.

Users ranked 2007 INFINITI M35 against other cars which they drove/owned. Each ranking was based on 9 categories. Here is the summary of top rankings.

I have a 07 Infiniti M35. It has cut off while driving on several occasions ....dealer said I had a defected battery got a new battery..less than a month it happened again, in traffic! This doesn't...

213 views with 4 answers (last answer about a year ago)

My 2007 infiniti M35X is making a noise when I accelerate and reach speeds at 40mph and 70mph. It's like an exhaust rattling noise or something to that nature.