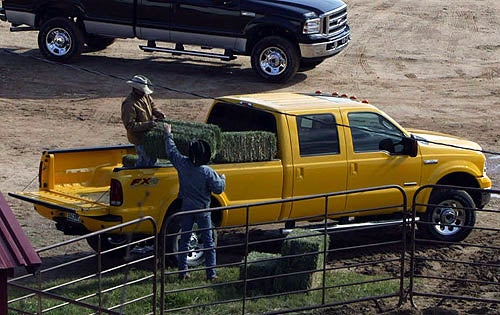 The 2007 Ford F-250 Super Duty pickup is one of the most eagerly-awaited vehicles Ford's announced in recent years. And unfortunately, because of ongoing conflicts with diesel V8 vendor International Truck, those of you who want an '07 F250 Super Duty may have to wait a while, no matter how eager you are.

The rugged '07 Ford F-250 Super Duty has a sturdier frame and stiffer suspension than most people ever need in the suburbs. If you're doing serious hauling, though, you'll appreciate the Super Duty's impressive payload capacity: the 2007 Ford F250 Super Duty can carry up to 3,200 pounds and tow up to 12,500.

Three trims are offered for the Ford F-250 Super Duty: XL, XLT, and Lariat. In addition, there are a range of options packages including Harley-Davidson, Outlaw, and Highline.

Users ranked 2007 Ford F-250 Super Duty against other cars which they drove/owned. Each ranking was based on 9 categories. Here is the summary of top rankings.

Like to know where the camshaft sensor is located

837 views with 2 answers (last answer about a year ago)

Need Help With Knowing What's Going On With My Truck?

My truck was working fine then when I stopped at the store it wouldnt start up wouldnt turn over or nothing I jumped it n it started up but now it feels like theres no power it feels like it can b...

Ive accidentally shorted the radio power supply at the radio location . The fuses for the radio were not blown. Is there an inline fuse before the fusebox? No power showing at that fuse location

Truck was going down the road fine and then a pop and jerk. Now it seems like every gear is neutral. What could this be?

I have a nice ford f250 diesel lariat package truck that engine needs now to be replaced 180,000 miles what is a fair sales price to sell it for as is. Body and interior , all amenities in good work...