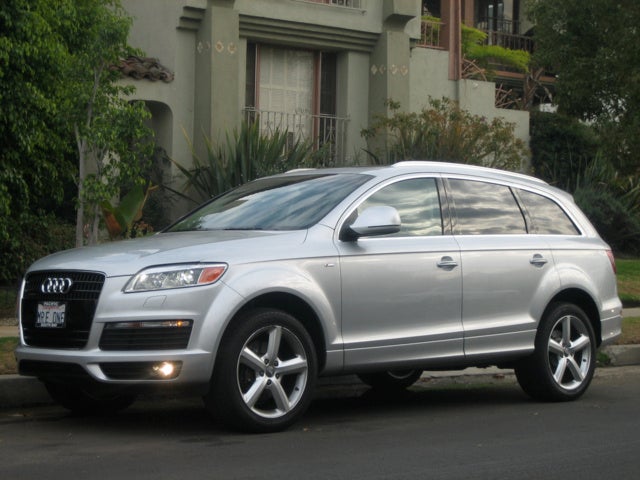 Audi is hoping there's no such thing as showing up too late for a party as it introduces its first SUV, the 2007 Q7. Once relying only on its Avant and allroad wagons, which featured the quattro system that rivaled most SUVs, but lacked the seating and cargo capacity, Audi hopes its new upscale Q7 will appeal to the high-end family car segment.

The 2007 Q7 is a full-size luxury SUV that shares a platform with the Cayenne and Touareg. However, it is 13 inches longer in order to fit in three rows of seats for six or seven passengers (depending on bench or buckets). Fold-down options add up to 28 seating and storage configurations, and the trunk opens up to 89-cubic feet when both back rows are folded flat. The Audi Q7 features either a 3.6-liter, 280-hp V6 or 4.2-liter, 350-hp V8, both paired with a 6-speed Tiptronic auto/manual transmission. Each engine comes in two trims, base and premium, but all have quattro AWD. A hybrid is being developed for 2008.

Outside, the sloping roofline makes the 2007 Q7 resemble more a station wagon than oversized SUV, looking deceptively smaller than it is inside. It handles more like a car too due to its partially aluminum frame. Along with the quattro feature is an adaptive air suspension that automatically adjusts ride height according to road conditions, to achieve optimal performance. A luxurious interior is de rigeur for Audi, and you'll find the usual suspects in the 2007 Q7. A variety of safety options (standard in Premium trim) include a side-assist warning system that combats blind spots by sending a light signal when cars are approaching, a rearview camera, a visual and audio parking alert, colllision alert, and active cruise control which stops the car if traffic demands.

So far, owners seem to love the precise, confident handling and variable air suspension feature and say that the Q7 has one of the tightest turn ratios of any SUV. Its unique look distinguishes it from more boxy monsters. The interior is comfortable, and drivers say it has a sporty feel behind the wheel. Early criticism focuses on the cramped and hard to access third row of seats. Shifting seems sloppy and unsure, and there is no low gear range for offroading (though just who exactly is taking their luxurious Q7 offroad?). The center console has an awkward placement, and of course, the gas consumption is heart-stopping.

My Audi Q7 Suddenly Shut Down And Won't Crank. All Lights Were Ok, Not A B...

MY AC STOP WORKIN WAS WORKING FINE AND NOW IT ONLY BLOWS HOT AIR...PLEASE H...

THE AC WAS WORKING FINE AND AFTER I TURN THE MOTOR OFF AND TURN IT BACK ON THE AC START BLOWING HOT AIR... WHTA CAN THE PROBLEM BE

171 views with 3 answers (last answer about a year ago)

Hi i have a audi q7 2007, i have a problem with the starting of the engine. when engine is cold, engine starts fine, then i go for a drive, switch of engine, then try to start, and the engine turns ...

Hi everyone. I'm new, please be kind. So 17 weeks ago a purchased an audi q7 sline 3L 2007 reg. 16 weeks ago it died and wouldn't turn over. It had 4 mechanics scratching their heads at what the...