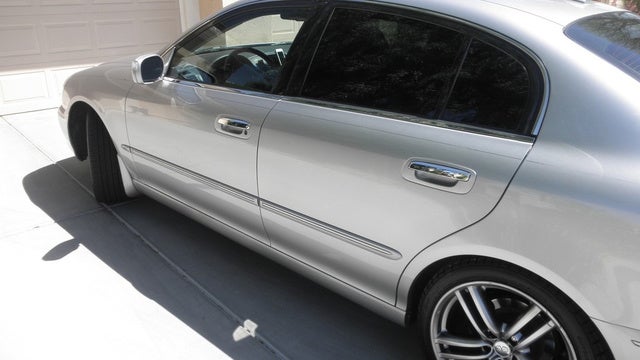 CarGurus has 27 nationwide Q45 listings and the tools to find you a great deal.

The 2006 Infiniti Q45 received sporty updates that improve performance this year, included in a new trim. Along with the base Q luxury sedan, which was dropped mid-year, the 2006 Q45 adds a Sport model that features larger 19-inch alloy wheels, an even stiffer sport suspension, and active rear-steer. This system takes speed and steering inputs to automatically adjust the rear suspension. This is different from the adaptive suspension in the base Q trim, which allows the driver to make adjustments according to road conditions. Another performance upgrade for 2006 is a revised 5-speed shiftable automatic. Improvements include a better torque converter and wider gear spacing. Also added this year are standard Bluetooth and an optional lane-departure warning system included in the Premium package. This package also adds adaptive cruise control, heated and cooled seats, rear reclining seats, rear climate controls, and a new power rear window shade.

Combining luxury with performance, the base 2006 Infiniti Q45 is well-equipped on its own. The 4.5-liter, 340-hp V8 is quiet and smooth, delivering 333 ft-lbs of torque and plenty of acceleration power. Heated leather seats, power front seats with memory settings, and a power tilt and telescopic steering wheel keep the driver happy, while a 6-CD changer (with rear audio controls), satellite radio, and a sunroof please passengers as well. Safety is not neglected either, and the Q45 earns high ratings for including such features as ABS brakes, stability and traction control, dual front-side and side curtain airbags for each row, a rearview camera, rain-sensing wipers, and a tire monitor. A navigation system became standard last year, but there have been complaints about its ergonomics, as it is controlled by a joystick that can get complicated. The Q45 compensates by including voice-activated controls for the cruise, climate, and audio controls, which should help free up the driver's hands to concentrate on actually driving.

With as many upscale comforts as its European rivals, but at a lower price, the 2006 Infiniti Q45 pleases drivers looking for a reliable sedan that also provides that high-end feel. Drivers rate the V8 engine highly, along with the interior comfort and smooth ride. A small 14-cubic-foot trunk, low gas mileage, and the dash layout are the only major complaints. Although it lacks the flair and refinement of a BMW or Mercedes, the Q45 nicely blends family-sedan safety and space with more driver-oriented performance and luxury.

CarGurus has 27 nationwide Q45 listings and the tools to find you a great deal.