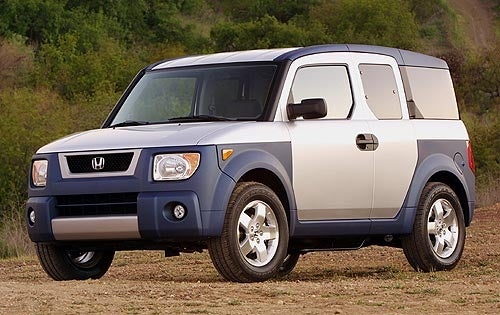 Average user score
4.6 ⁄ 5 stars
Based on 22 reviews
Swiss Army Knife Of Cars by Steve_D — This car hits the sweet spot for me, One of the drop down questions on this survey is "What did you mainly use this car for?"...I could check all of the options (commuting to work, family transportati... Read more
One Of The Best! by pasiebert — We have had this car for about 3 years now. It has been nothing but reliable. We have had standard things done to it, and it is plugging away. There is hardly any need to own a truck when you have an ... Read more
Very Fun And Gas Friendly Min Suv by Donna — Fully loaded....added extra features to it to make it fully loaded. Fog lamps, AM/FM CD XM stereo with 5 speakers. The seats are easy to take out. It is very easy to clean the floor and seats. Very go... Read more 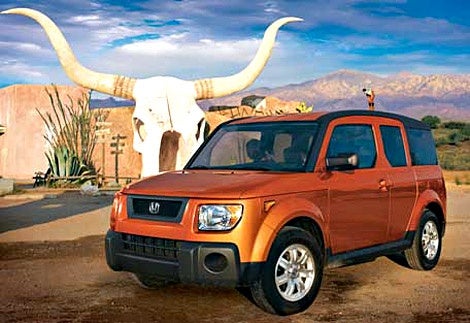 The 2006 Element brings a number of equipment changes and adds a new trim line, the EX-P, to its LX and EX lineup.

The three trim lines all share an i-VTEC 2.4-liter four-cylinder engine, which produces 156 hp with 160 lb-ft of torque on regular fuel. A five-speed manual transmission comes standard, with a four-speed automatic optional. All models offer either front-wheel drive (2WD) or Honda’s Real-Time 4-Wheel Drive (4WD). Reviewers in a 2WD LX manual did the 0-60 jump in 8.8 seconds, while Honda gives 11.4 seconds with the automatic.

The Element’s running gear, like that of its CR-V cousin, makes use of Civic components. Although 8 inches taller than the CR-V, the Element is shorter than a Civic coupe. In order to provide maximum carrying capacity, the Element seats only four. The missing B-pillar, usually right behind the front seats, provides one of its most striking features. The back side doors are rear-hinged for wider opening, and without the B-pillar, they allow easy large-object loading. As a safety feature, the rear doors cannot open without first opening the front doors; when closing, the rear doors go first, then front doors. Reviewers enjoy the wide open spaces, but complain about the door opening sequences. The tailgate splits horizontally, with the top raising like a hatch and the bottom opening downward like a tailgate.

The cabin's layout is highly flexible. The lack of a central tunnel combined with a high roof provides a spacious front seating area. The rear seats, raised off the floor for more legroom, fold down, swing up to the side, or can be easily removed. The resulting spacious, uninterrupted flat floor space is coated in a water-, dirt-, and scratch-resistant urethane material that's easy to clean. The front and rear seats are coated with an easily cleaned waterproof material. With the rear seats removed, the Element offers 75 cubic feet of cargo space. Reviewers found the seats could be configured as a large double bed, as a carrier for two 10-foot surfboards with two surfers, as a dog carrier, or to fit the kitchen sink. The 4WD configuration also adds a removable rear sunroof across all the trim lines.

As a 2WD, reviewers report slight torque steer, which goes away in 4WD form. The Element’s wider-than-a-CR-V's track improves its cornering ability. The engine with manual transmission provides sprightly performance, but the automatic dampens it. The Element’s tall form creates wind noise at highway speed, but its good steering and brake feedback add to a more car-like than SUV-ish driving experience.

Have you driven a 2006 Honda Element?
Rank This Car

What Is This Noise???

I have a 2006 Honda Element. It makes a "rubbing" sound with an added "clunking" sound on the left front side while driving. Only while giving it gas, if I coast, the noises go away. There's no dif...

Getting Intouch With A Private Seller

0 views with no answers yet
10

Will Replacing The Instrument Cluster Change My Mileage?

I have a failing Instrument Cluster on a 2006 Honda Element and I'd like to replace it with one I've found on ebay. If I plug the new part in, will it show my current mileage or the mileage from its...