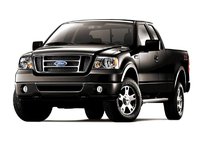 Competition in the full-size pickup truck segment is fierce, so the 2006 Ford F-150 gets a few changes to make it even more irresistible. 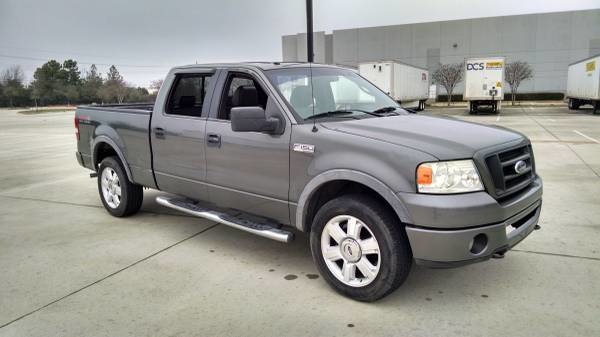 Nothing yells “‘Murica!” quite like a hog, so Ford debuts a new Harley-Davidson-themed version of the 2006 F-150 SuperCab complete with massive 22-inch wheels, custom paint, and special interior leather. Ford also endows several other versions of the truck with 20-inch wheels, adds a new 6.5-foot bed option for the crew cab model, and enhances the F-150’s stereo and safety offerings. 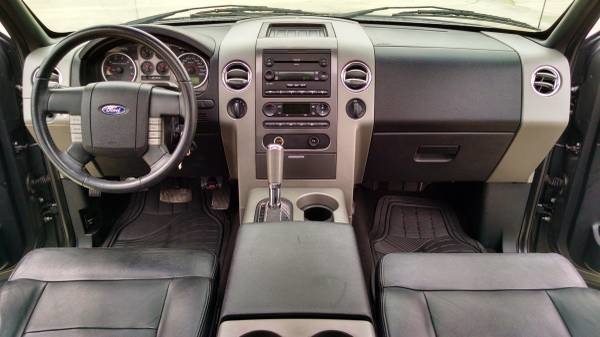 Already a handsome truck, the F-150’s new Harley Davidson version is downright drool-worthy. The polished 22s do the F-150 all kinds of favors, and the black monochrome paint and horizontal chrome grille bars give the truck serious class. The only questionable element here is the Harley Davidson decal, rendered in neon colors more appropriate for South Beach than the South 40.

Silver gauges, gloss-black dashboard trim, chrome accents, metallic pedal covers, and a center console with a transmission shifter continue the Harley Davidson edition’s understated yet fancy look inside the cab. The cohesive and classy result is certainly preferable to other F-150 trims, which adopt a modular approach that can mix and match interior color, unconvincing silver metallic trim, fake wood, and black switchgear in unsavory ways. 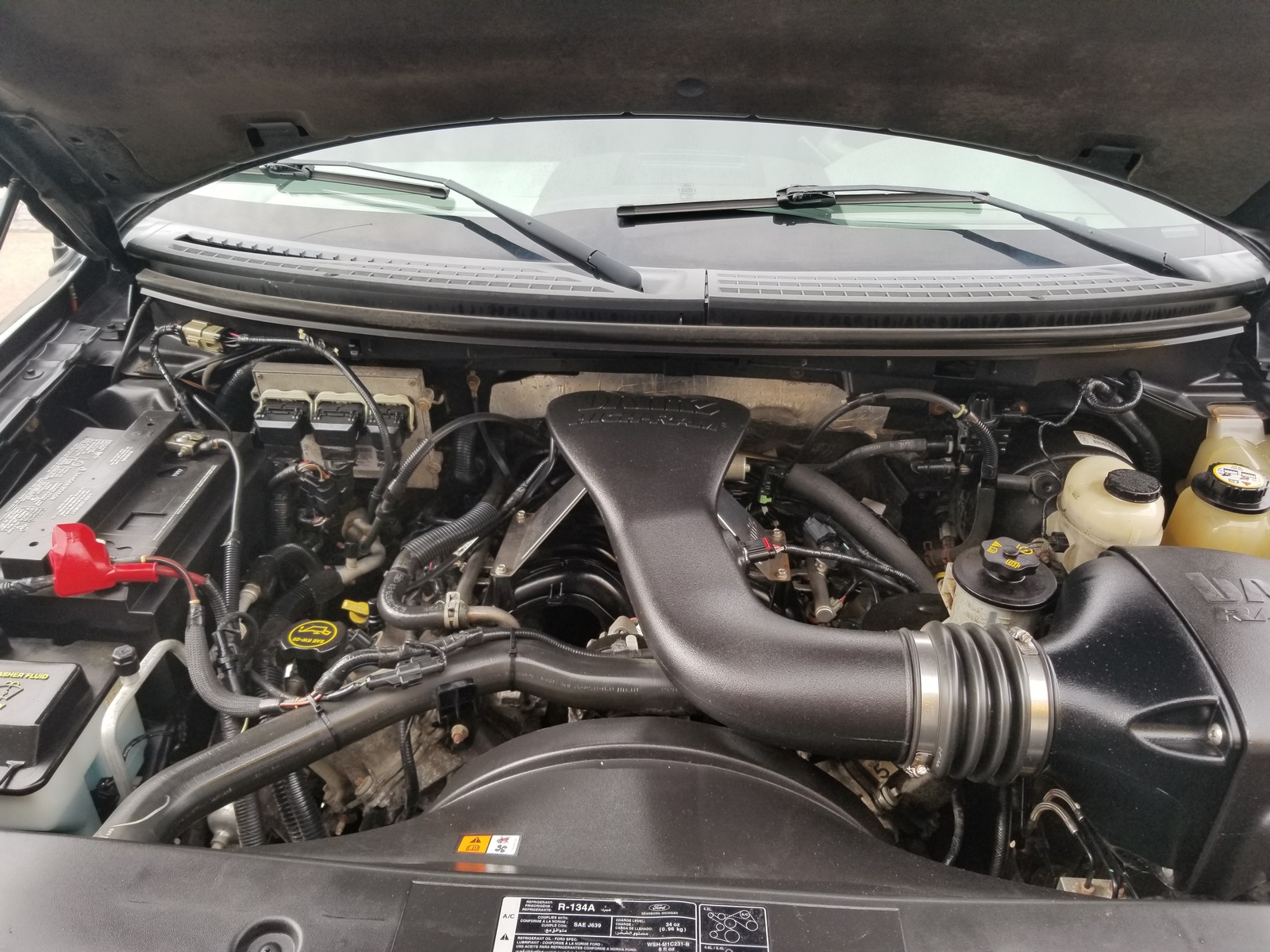 Three engines are available for the 2006 F-150. The standard 202-horsepower 4.2-liter V6 keeps the price down but is adequate only for light-duty tasks. The 231-hp 4.6-liter V8 offers more motivation, but the F-150 is a heavy truck, so this engine can still struggle under load. That makes the 5.4-liter V8, which produces 300 hp and 365 lb-ft of torque, the desirable one. Remarkably, it’s not much less fuel-efficient than the other engines.

Recently redesigned for the 2004 model year, the F-150 is more refined than its competitors. Quiet, stiff, and responsive, the latest F-150 drives more like a car and less like a truck than ever. And in new Harley-Davidson specification, with the oversize 22-inch wheels and tires, it supplies a level of athleticism missing from this truck since Ford canceled the Special Vehicle Team (SVT) version after the 2003 model year.

For off-roading, be sure to get the F-150 FX4. With skid plates, special suspension tuning, and more, it’s going to be the most capable version of the truck when the pavement ends and the adventure begins. 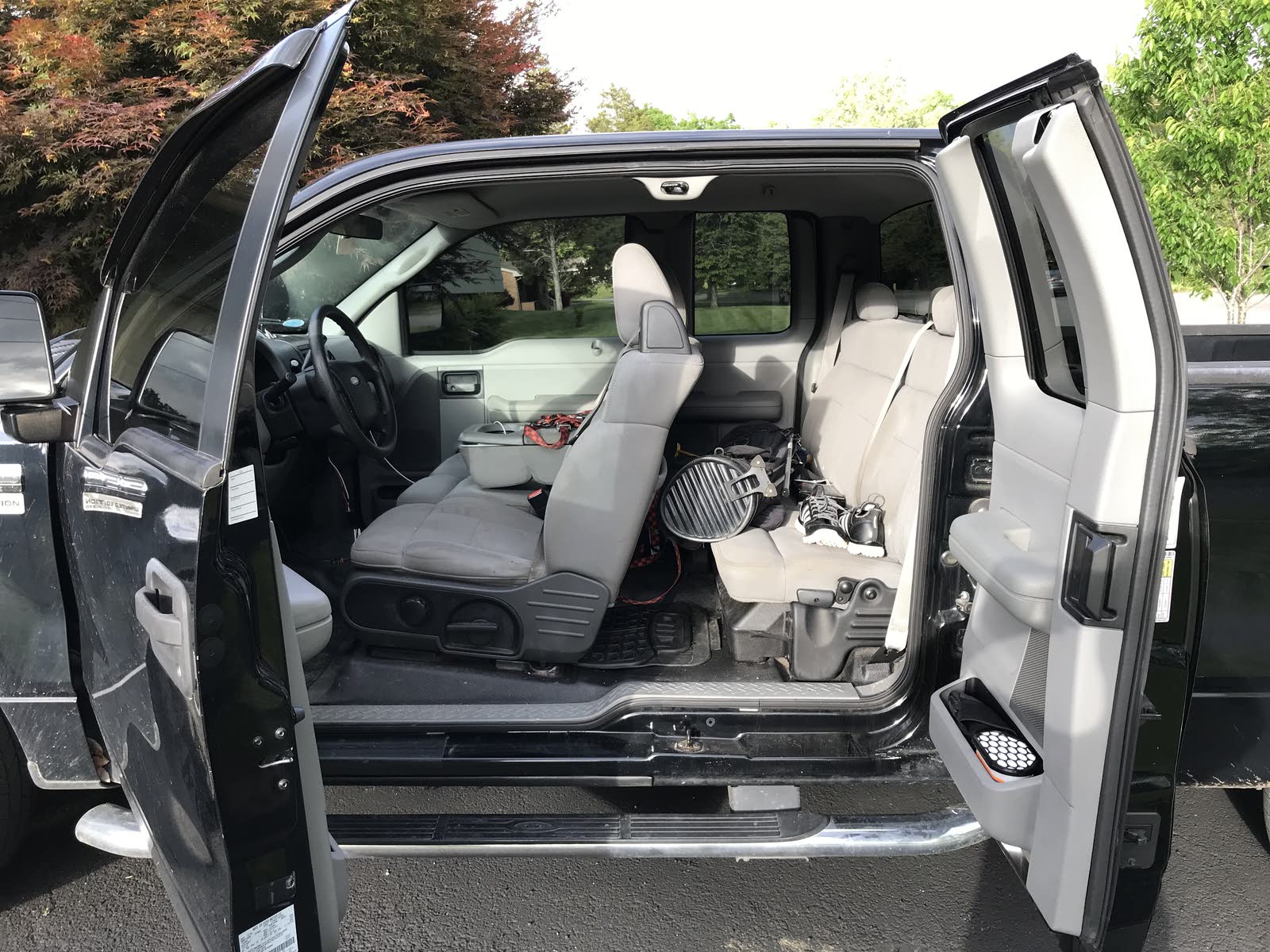 Like any full-size pickup truck, the 2006 Ford F-150 offers plenty of space to spread out. And with a crew cab configuration, you can carry up to six people as long as you don’t buy a version with the front center console and transmission shifter.

Storage space is good, and versions with a front bench seat have a fold-down center armrest with cupholders and a storage bin. With the regular cab, Ford thoughtfully provides reverse-hinged access doors to make the storage space behind the front seats easier to use. And when it comes to work instead of play, Ford says the F-150 can tow nearly 10,000 pounds and carry more than 3,000 pounds of payload when properly equipped.

As you move up the trim ladder in price, you gain access to additional equipment. Highlights include fancier wheels, nicer interior materials, a better stereo, automatic climate control, and more. 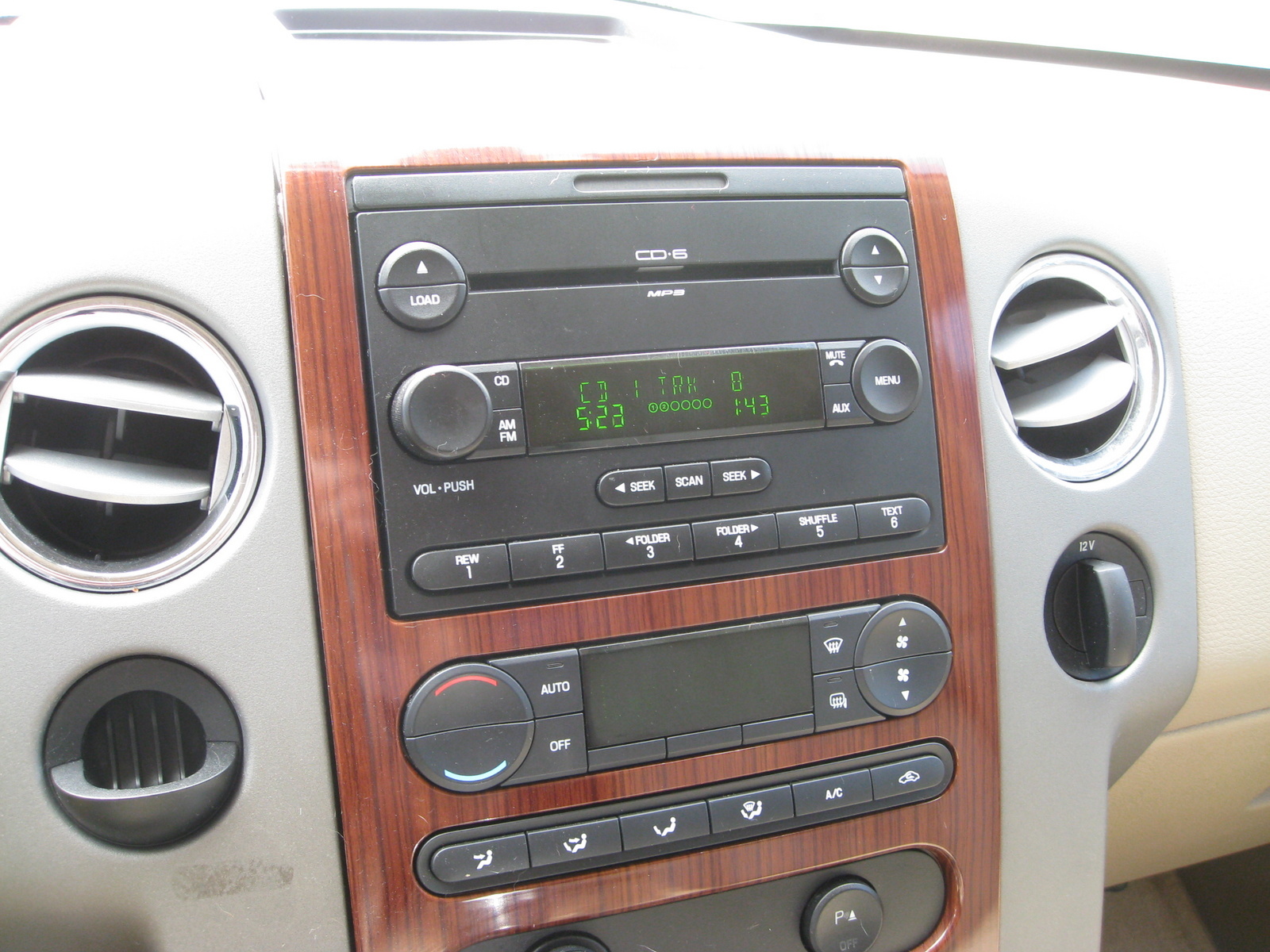 Buy an F-150 XL, and you’re going to get a basic work truck. The STX trim adds a CD player and, starting with this sporty but affordable model, F-150 buyers can upgrade to a 6-disc in-dash CD changer, a premium Audiophile sound system, and as a new feature for 2006, satellite radio.

As far as technology goes, there isn’t much when it comes to the 2006 F-150. The most sophisticated bits and pieces include a shift-on-the-fly 4-wheel-drive system, remote keyless entry, automatic climate control, and power-adjustable pedals. Even the high-end King Ranch and Harley-Davidson versions are mostly about cosmetics rather than substance. 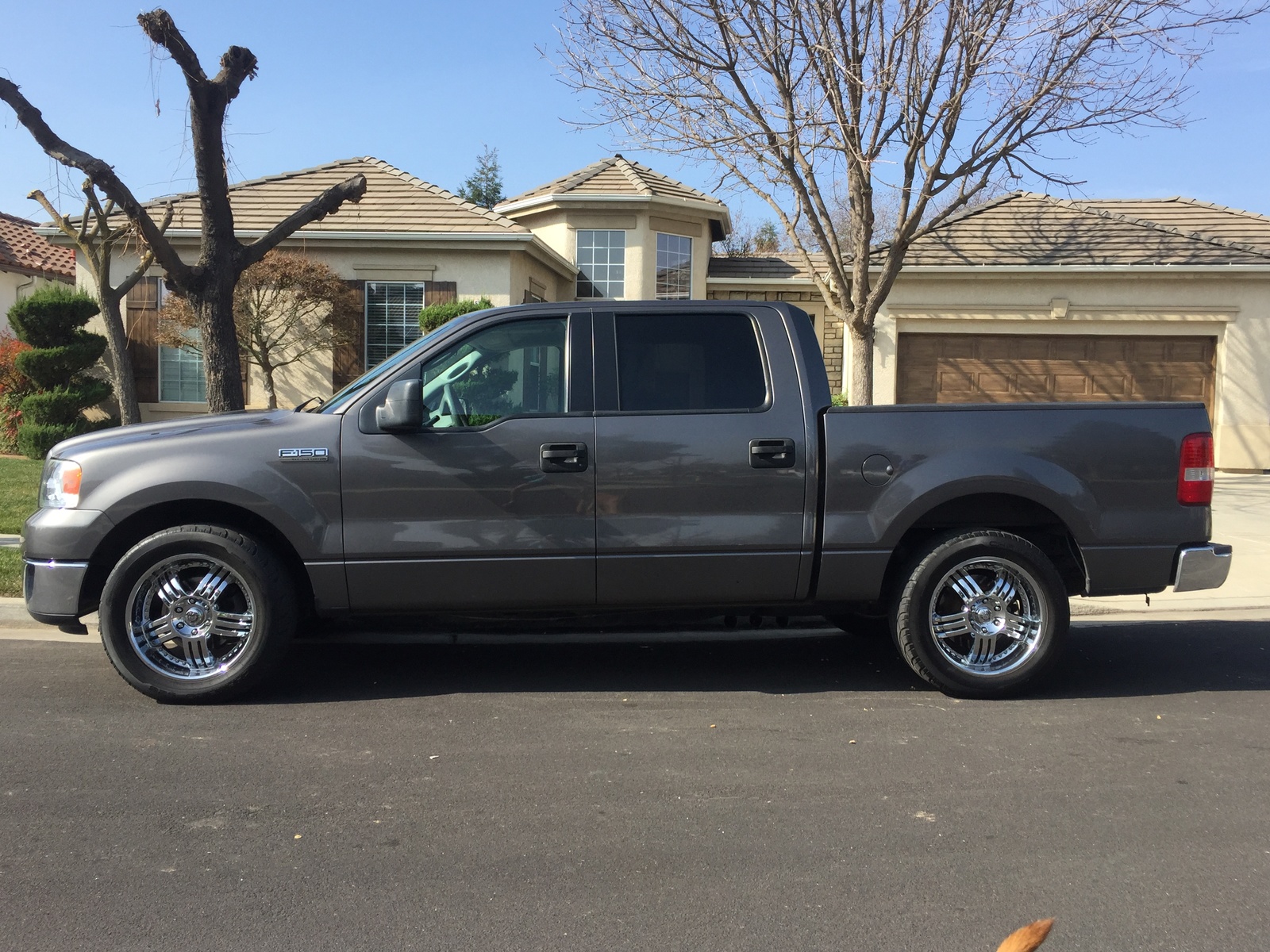 For 2006, F-150s with a V8 engine and rear-wheel drive (RWD) are available with traction control. Sadly, this constitutes big news on the safety front. Ford still isn’t offering side-impact airbags or stability control for its full-size, half-ton truck.

In crash-test ratings conducted by the National Highway Traffic Safety Administration (NHTSA), the 2006 F-150 excels when it comes to frontal-impact protection and its ability to resist rolling over in a collision. The NHTSA has not rated the truck for side-impact protection.

Checking safety ratings from the Insurance Institute for Highway Safety (IIHS) is no help because the organization hasn’t assessed the F-150’s side-impact crashworthiness. In IIHS testing, the SuperCab gets a Good rating for moderate-overlap frontal-impact protection. 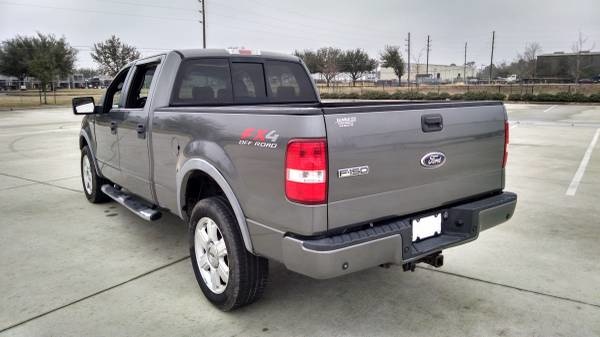 Ford offers one of the most extensive full-size half-ton pickup lineups in America. With three engines, three cab styles, three bed lengths, two bed styles, and seven trim levels, there is something for everyone here.

However, in terms of fuel economy ratings, the F-150 lineup fails to impress. And the lack of side-impact protection and stability control is increasingly of concern.

gdnorris 103000 miles on 5.4. No problems. Regular oil changes every 5000 miles with primarily Valvoline 5W-20. Just took it back to the dealer for maintenance work. Transmission fluid, antifreeze, fuel filter and spark plugs, even though it was running and idling fine. Spark plugs alone set me back $522. Ridiculous in my opinion. Average around 16 mpg. Only nagging things that don't work is the odometer light went out about 2 years ago and the outside temperature sensor quit working about 3 months ago. Also, I hate the odometer display in this truck. Also, seats are not as comfortable as my 95 Dodge. Very dependable and built to last which is why I bought it.

Users ranked 2006 Ford F-150 against other cars which they drove/owned. Each ranking was based on 9 categories. Here is the summary of top rankings.

What Does It Mean When The Truck Ignition Just Ticks And Does Not Turnover?...

Battery was fully charged the day before

I have a f150 that it hesitates around 5 second when I put it on drive to it starts to move, it only does it on drive not on reverse, can someone at least give me an opinion please, it's a RWD

Not Sure If My Question Made It Through The System.

My left rear running light works fine but the brake and blinker light will not work. Fuses inside the cab are good. There is a black wire that looks like a ground wire inside of the tail light cove...