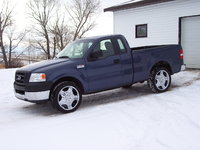 One year after a complete redesign, the handsome and capable 2005 Ford F-150 remains firmly perched atop America’s sales charts. 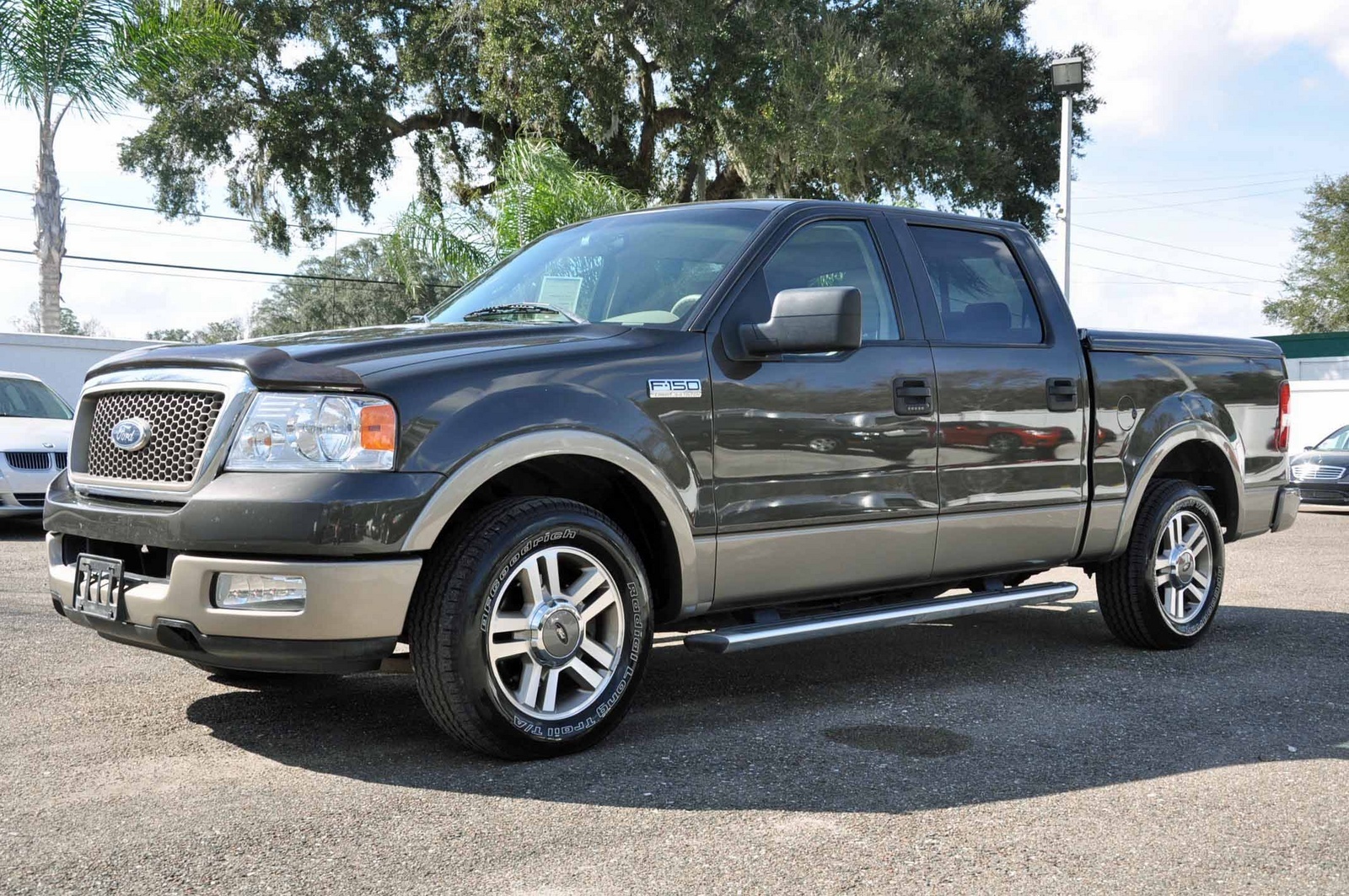 When you’re lookin’ for the most capable full-size, half-ton truck for towin’, haulin’, or plain and simple havin’ a good time, the 2005 Ford F-150 is the rig to buy. And this year, it better fits budgets big and small thanks to a new Work Truck option package for the XL trim and a western-themed King Ranch luxury model. 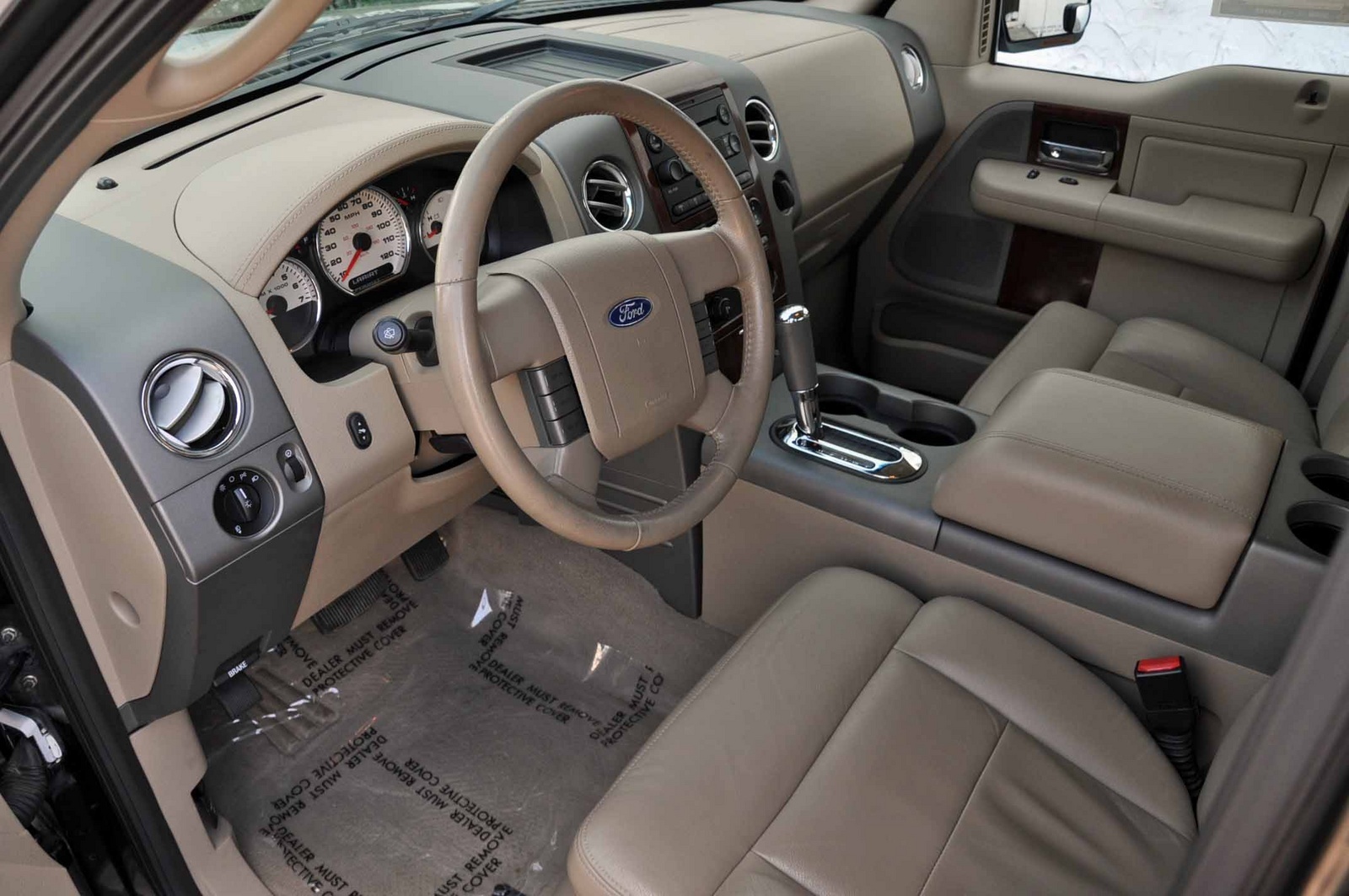 Redesigned for 2004, the F-150 swapped its rounded aerodynamic look for a more traditional appearance. The result is a good looking truck, especially in higher trim levels where extra chrome, bigger wheels, and available two-tone paint dress things up.

Similarly, the previous F-150’s amorphous dashboard ovals are gone, ditched in favor of a simple approach emphasizing symmetry. Circular detailing ties everything together, from the instrumentation to the air vents. 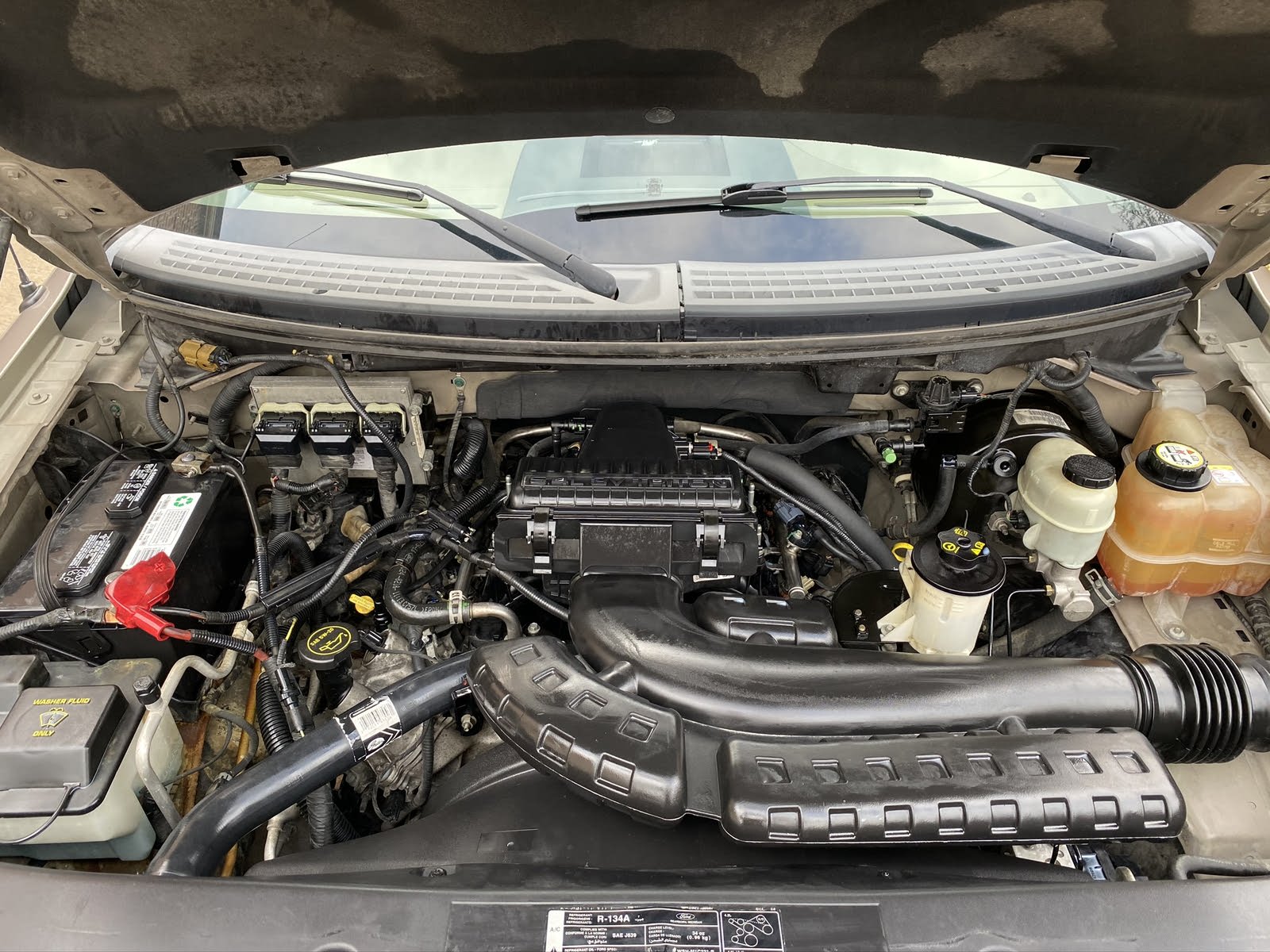 For 2005, a new 202-horsepower 4.2-liter V6 engine is available, offering a lower-cost alternative to the formerly standard 231-hp 4.6-liter V8 engine. The V6 comes with a 5-speed manual or a 4-speed automatic transmission.

The 4.6-liter V8 remains available, as does the 300-hp 5.4-liter V8. Both employ a 4-speed automatic, and any F-150 can be fitted with 4-wheel drive. With the big V8, Ford claims the 2005 F-150 offers the most payload and towing capacity in the full-size, half-ton pickup segment, at 9,900 pounds of towing capability and 3,000 pounds of payload capacity (when properly configured and equipped).

Compared to its competition, the F-150 is a model of comfort and refinement. The ride and handling are excellent, and the cabin is quiet when cruising on the open road. For maximum acceleration, you’ll want the 5.4-liter V8 engine, but it will cost you at the gas pump.

If you’re planning to spend lots of time off the pavement, consider the F-150 FX4. Ford positions this trim level as the off-roading version of the truck, giving it the revised suspension tuning and skid plates necessary to survive more severe use. 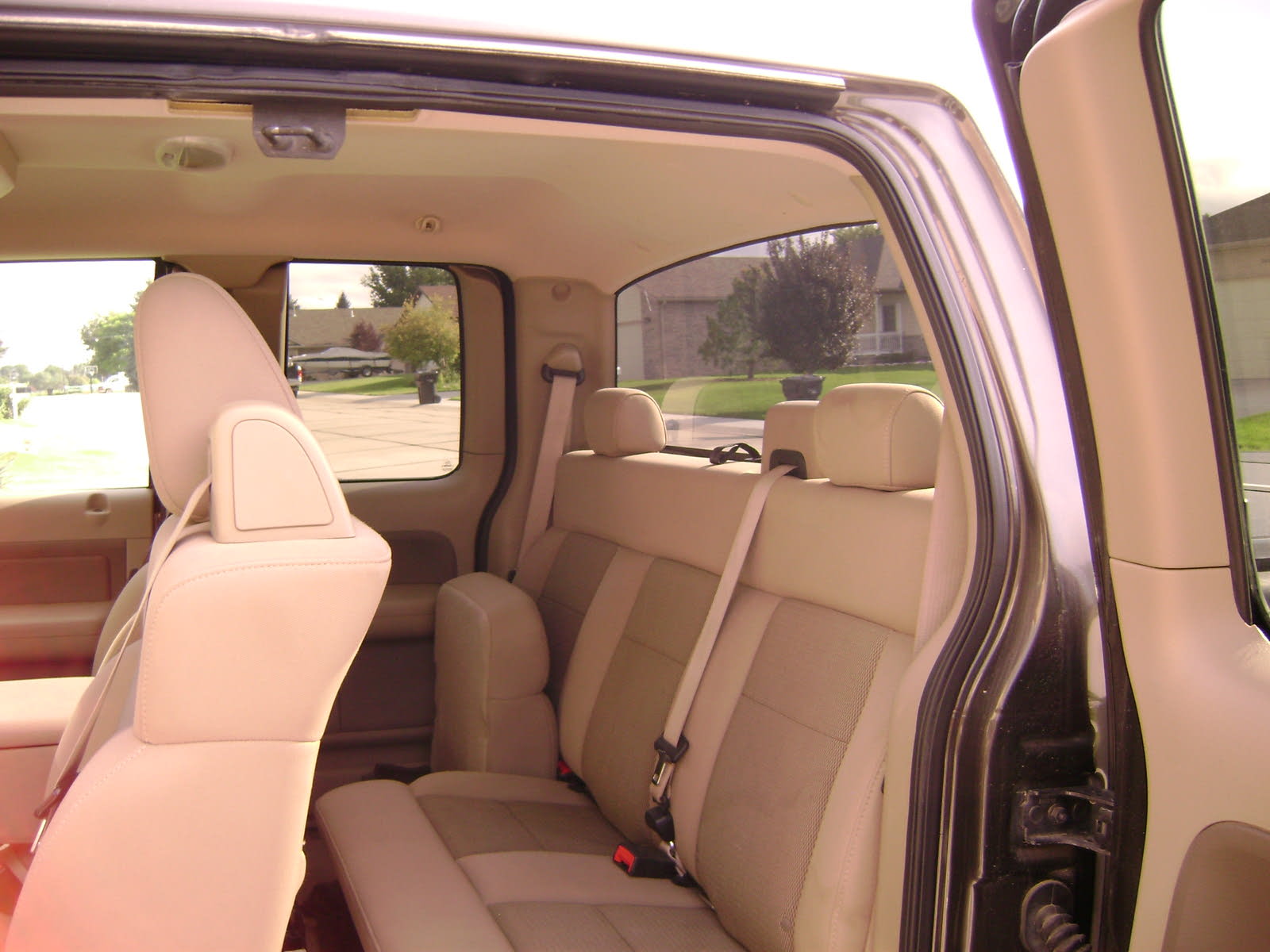 Depending on the cab style, trim level, and seat selection, the F-150 carries between two and six people.

Up front, occupants feel like they’re sitting high with a good view forward thanks to side glass that dips down near the side mirrors in order to improve visibility.

With a bench front seat, the center seatback folds down to provide cupholders and a small storage bin. With bucket seats, a large center console fills the space. The Lariat, FX4, and King Ranch have a full console with a transmission shifter.

If you’re going to carry passengers on a regular basis, or you simply need lots of secure, in-cab storage space, get the F-150 Crew Cab. It offers three-across rear seating or plenty of space in which to stash your stuff. 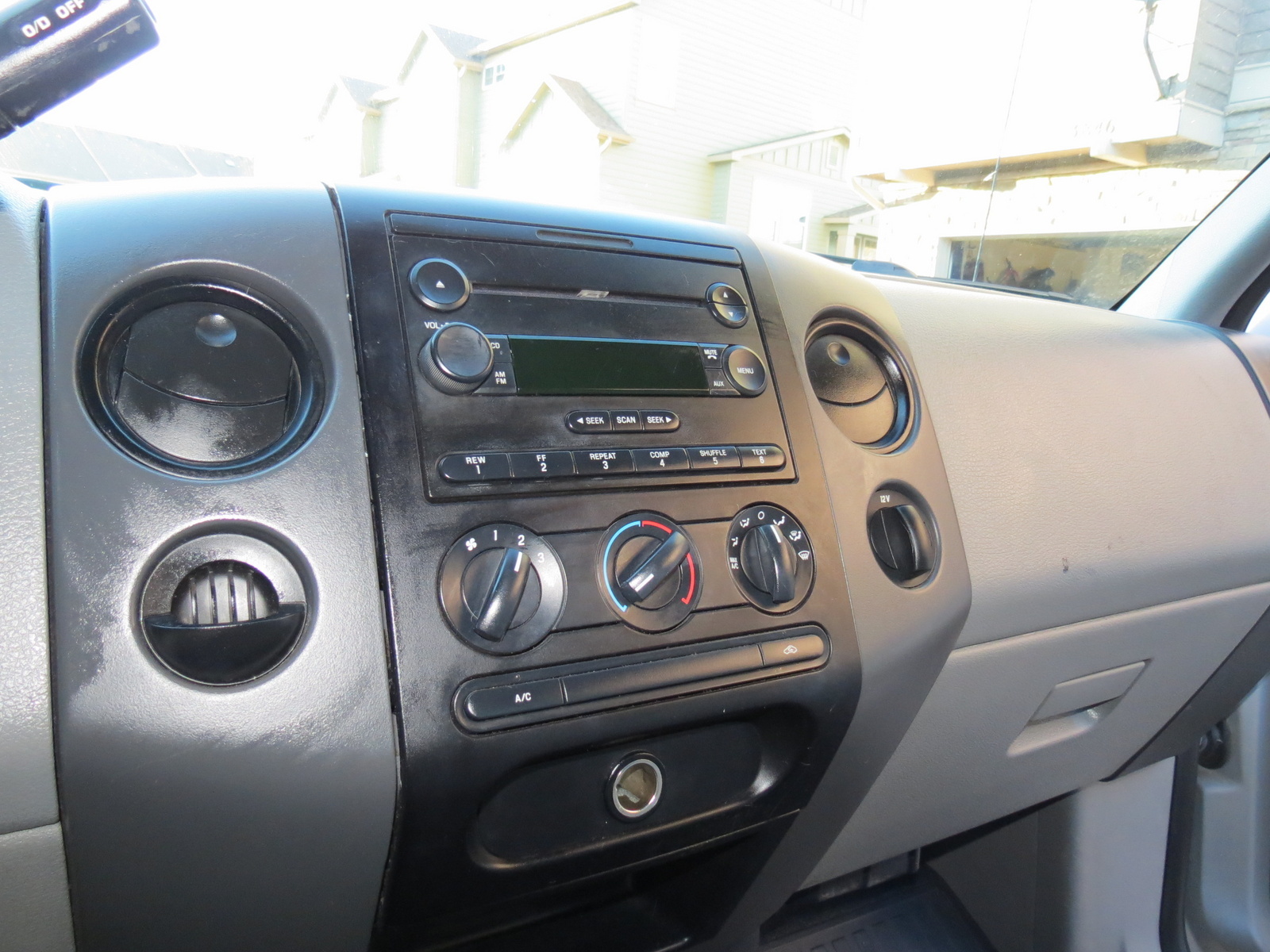 While modern cars increasingly provide numerous new technologies related to safety, connectivity, and convenience, trucks lag behind in terms of such systems.

When it comes to the F-150, the most advanced features to report include automatic headlights, remote keyless entry, automatic climate control, power-adjustable pedals, and shift-on-the-fly 4WD.

The F-150’s radio and stereo offerings are fairly basic, ranging from AM/FM reception and a CD player to a premium sound system. Sorry, cowboy, but you’ll need to leave the mix tape at home. 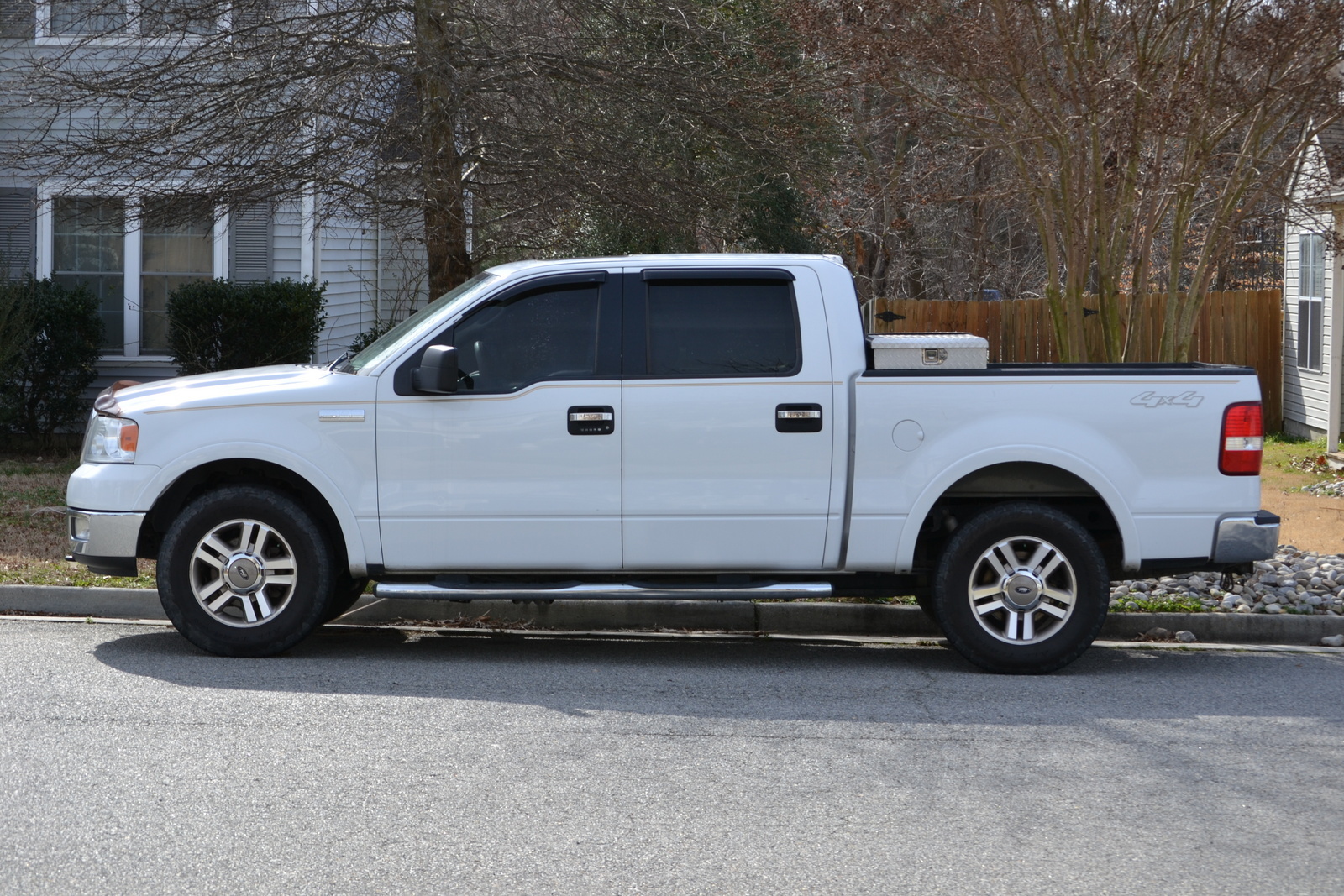 Aside from 4-wheel antilock brakes, the 2005 Ford F-150 relies on dual front airbags and a robustly engineered, fully-boxed frame to keep occupants safe. Side-impact airbags are unavailable, putting the Ford behind Dodge in this respect.

In crash tests, the F-150 SuperCrew earns a 5-star rating for driver and front passenger protection in a frontal impact, according to the National Highway Traffic Safety Administration (NHTSA). The Insurance Institute for Highway Safety (IIHS) agrees, giving the SuperCab version of the truck a Good rating for driver protection in the moderate-overlap frontal-impact test.

Unfortunately, the jury is out as to whether the lack of side-impact airbags is a problem. Neither the NHTSA nor the IIHS evaluated the 2005 F-150’s ability to protect people in that type of collision. 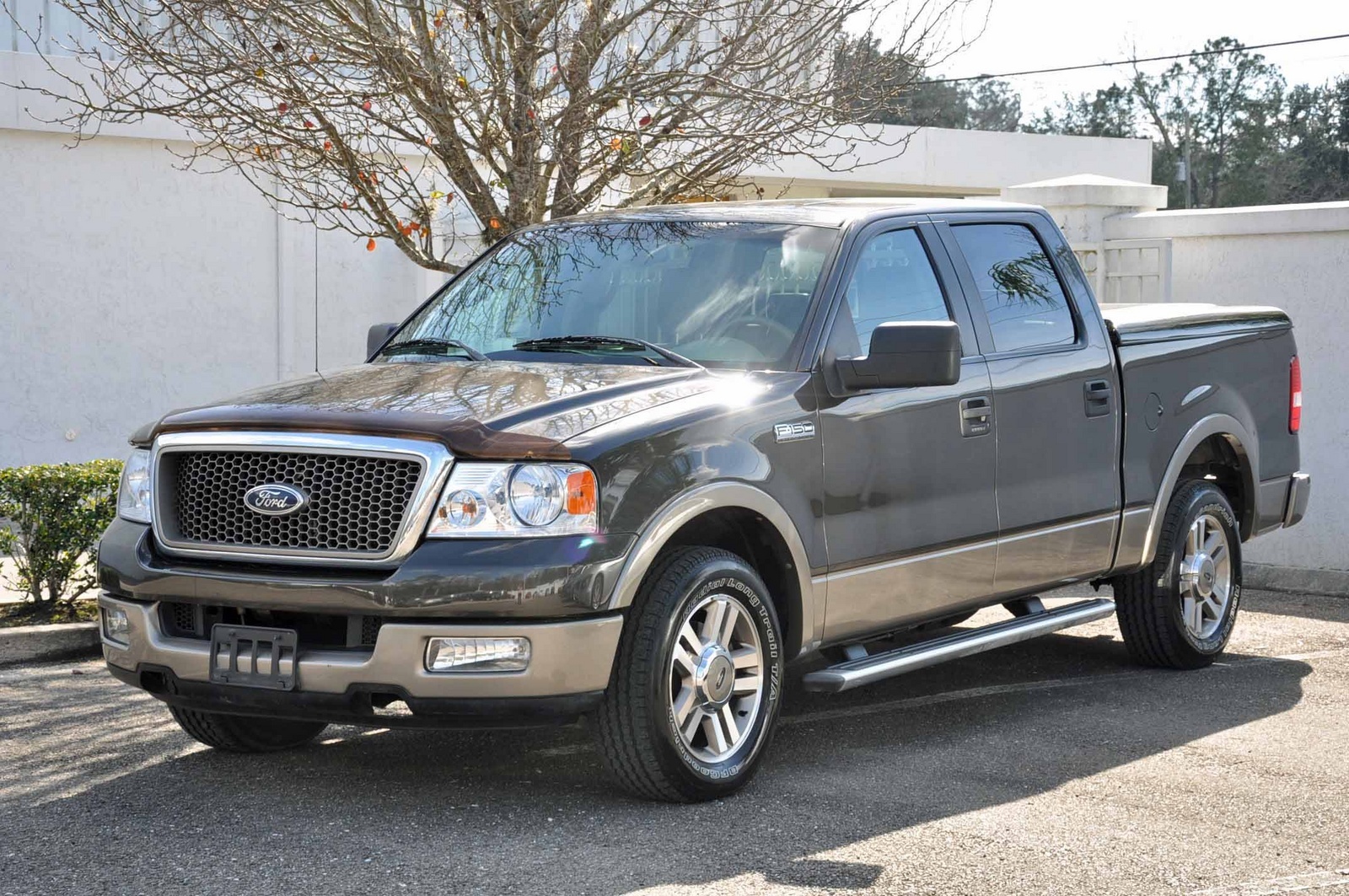 But you should know this: Among this collection of trucks, the F-150 is the least fuel-efficient. Versions of the Chevy, Dodge, and Toyota get better gas mileage than any example of the Ford, and that’s mainly because the F-150 is a heavy son of a gun.

With that said, the 2005 Ford F-150 lineup does offer a little more affordability in the form of the new V6 engine and Work Truck package. And if you’ve got money to burn, the new F-150 King Ranch is now the most luxurious Ford pickup truck in the land.

Derek Just sold my 04 lariat most impressed w that truck. Never a Ford guy till I owned it and now looking for near identical one. Test drove 05 lariat crew and felt even better. Great truck for my northern New England weather and my contracting job .

Lisa We never had chance to go see this vehicle went to see another one instead ,wish we would have went to see this one this guy was very honest,others were not

Users ranked 2005 Ford F-150 against other cars which they drove/owned. Each ranking was based on 9 categories. Here is the summary of top rankings.

I bought the 2005 Ford F150 6 months ago and it's had one problem after another with the Triton V8 XLT ever since. After $4,000 in engine work, and after the last oil change, the oil pressure tanked...

2005 Ford F150, 5.4L 4x4, Crew Cab, approximately 145,000 miles. I am having issues with the climate control. When the outside ambient air temperature as noted with the in-dash temperature reading r...

I have a 2005 Ford F-150, 5.4 that when the key is in the on position it beeps very fast and continuous. No anti theft lights, no codes being shown. I have checked all the fuses and relays and all ...

I'm looking to rebuild my engine. I have a few questions. First, is the 2005 5.4 Triton worth rebuilding? Secondly, is there a rebuild kit that includes a crankshaft? Third, what is the best rebuild...