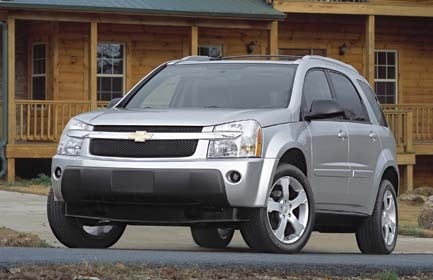 The 2005 Chevrolet Equinox was a brand-new midsize sport utility vehicle launched to replace the late and unlamented Tracker. Based on the Saturn Vue, the '05 Equinox is a Chevy re-engineering that features more sheet metal, a longer wheelbase, and an improved power steering system.

The longer wheelbase is key to the roomy interior of the '05 Chevy Equinox. Although there's only seating for five passengers, the headroom and legroom are generous, even by SUV standards. There's plenty of cargo space in the 2005 Equinox as well.

One of the challenges around marketing the '05 Chevrolet Equinox was its positioning within the SUV market spectrum. A bit larger than compact SUVs like the Vue (or the Honda Element or Toyota RAV4), it's on the small side when measured up against established midsized SUVs like the Nissan Pathfinder or Chevrolet's own TrailBlazer.

Still, the low sticker price and wealth of standard features drew buyers to the 2005 Chevy Equinox. Even with its somewhat less than oomphy engine (a 3.4-liter V6 with an output of 185 horsepower and 210 lb.-ft. of torque), the Equinox offers solid transportation at an affordable price. Fuel efficiency is pretty good for its class - 19 mpg city, 25 mpg highway are the EPA estimates.

What's your take on the 2005 Chevrolet Equinox?

Gardou Chevrolet Equinox 2005 is not good. My husband had a terrible accident. This car is crazy it's not safe a safe car.

Users ranked 2005 Chevrolet Equinox against other cars which they drove/owned. Each ranking was based on 9 categories. Here is the summary of top rankings.

Have you driven a 2005 Chevrolet Equinox?
Rank This Car

I am trying to take the oil pan off, but after removing all bolts it is very secure to the block. Tried to pry and wasn't successful.Was told that it may be held by dowel pins. Is this correct?

Why Does Brake Pedal Go To The Floor?

I have replaced both calipers,pads,brake line and the master cylinder. I have bleed them and the pedal keeps going to the floor.

My Car Throttles Awkwardly In Drive

Just replaced head gaskets and map sensor. Car idles fine and throttles up fine in neutral. When giving it throttle in drive, car lurches and jerks, rpms up and down. Starts at about 20 mph and

Is The Chevy Equinox All Wheel Drive Automatic Or Do You Have To Turn It On...