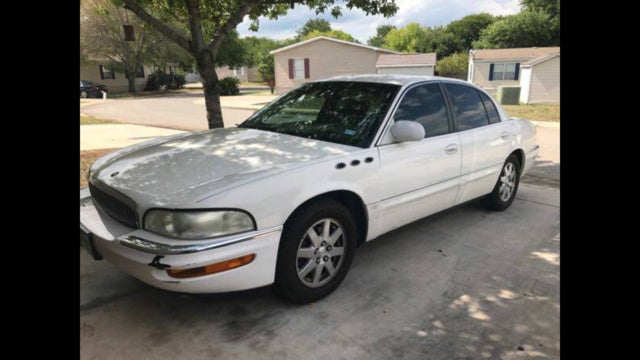 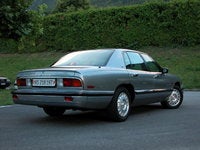 Looking for a Used Park Avenue in your area?

Buick is getting set to reinvigorate its brand with a whole new lineup for 2006, so 2005 will be the last year for the full-size Park Avenue sedan. This luxury sedan has seat for six in two rows of bench seats. Front bucket seats can be substituted with a handy center console. The 2005 Park Avenue is about roomy comfort and luxury. As a last hurrah, it gets some tweaks to its grille and taillights, gets new optional 17-inch chrome wheels, and adds the Ventiport portholes to the base as well as the Ultra trims.

Both the base and Ultra come with a 3.8-liter, 205-hp V6 engine and 4-speed automatic. To commemorate its luxury car, Buick badged the final 3000 (of nearly 7000 total) Park Avenues as Special Edition. These got the new chrome wheels, and a few also received a black and platinum exterior. Both models feature ABS brakes, dual front-side airbags, and traction control. StabiliTrak, OnStar, and rain-sensing wipers are standard on the Ultra and optional on the base. The Ultra is also equipped with the Gran Touring package, which is basically a sports-tuned suspension with a rear stabilizer bar. The ride is more responsive, but lacks the smoothness and effortlessness of the base model. Some helpful options are rear parking sensors and a heads-up display. Otherwise, you get power features, power seats with memory, wheel-mounted controls, and leather upholstery on all 2005 Park Avenues.

Drivers love the incredible amount of cabin and trunk room in the 2005 Park Avenue, and say it handles easily for such a large car. Gas mileage is also a nice surprise. Its ample legroom and wide doors making getting in and out easy. On the downside, interior materials look outdated, and the Ultra is a harsher ride than the base. Traditionally, the Park Avenue has been considered a grandpa car, primarily due to the fact that it requires little handling and steering (thanks to Magnasteer) effort and rates highly for safety and dependability. Now that Buick is changing its strategy to attract a younger driver, the Park Avenue seems out of place.

What's your take on the 2005 Buick Park Avenue?

Have you driven a 2005 Buick Park Avenue?
Rank This Car

Looking for a Used Park Avenue in your area?

2005 Buick Park avenue ultra Audio system does not come on display panel nothing is lit up and the climate control board is not lit help please.

Were Any Of The 2005 Park Avenue Ultras Made With Two Tone Colors?

Such as, silver top and black body

Where exactly is the heater core on the inside

251 views with 4 answers (last answer about a year ago)

I HAVE A 2005 BUICK PARK AVE WHICH WAS PURCHASED THROUGH A SMALL DEALERSHIP. MY BATTERY OPERATED TRUNK, DOOR LOCK, AND ALARM WENT DEAD. I TRIED INSERTING THE MAIN KEY IN THE TRUNK AND TURNED IT, BUT I...

I have an 05 Buick Park avenue that I recently had air shocks put on in the rear. Why is my car still so low to tires and ground??