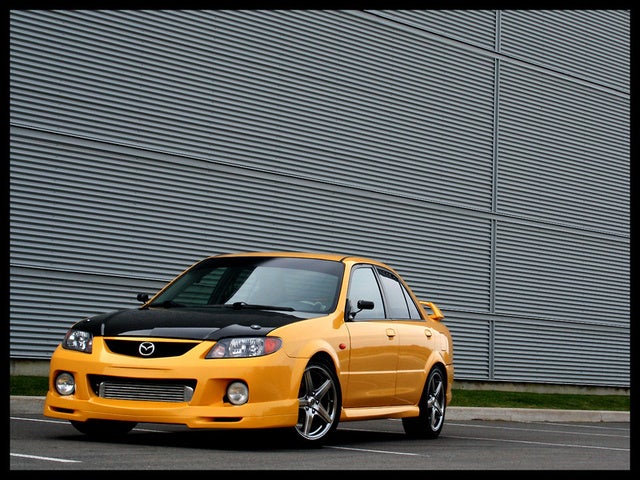 Have you driven a 2003 Mazda Protege?
Rank This Car

Sporty Family Car With A Decent Gas Economy By Krassimir

This car is a blast to drive! truly a perfect daily driver for anyone on a budget. The car is sporty too as it comes from the factory with a sporty stance. The car really can move if you give it gas. ... Read More

An Excellant Car And Fun To Drive. It Has Power,acceleration And Good Braking Power. By Mazda544

This car is fun to drive, it has power.Other than normal maintenance it does not cost me a lot of money to maintain . Had MAZDA come with a solid wheel hubcaps, and uses 87 octane gas, I would give th... Read More

blind spots are a minimal worry, proformance is better than expected, car looks great!, all and all... this car is the best purchas i've made since college classes. i would highly recomend this car to... Read More

Great acceleration, braking is okay, handling is amazing. Build quality is pretty good except the weak spots in the body where it tends to rust. Fortunately this protege has had very little rust poke ... Read More

The 2000 Mazda Protege' tan was about as boring a car can get. I bought it brand new with 5 speed manual transmission. My personality and lifestyle at the time was very conservative and it was proba... Read More

Ford Escort With A Mazda Symbol On It. By Mark

The car was fantastic on gas with the 1.8L under the hood. The Protege that I owned had a 5-speed manual transmission. Aside from the great gas mileage, it's the only other reason why I kept the car a... Read More

performance 1.8l engine that can be easily modded to suit anybody's needs. acceleration is a bit slow at first but can be changed through performance add ons. breaking and handling was designed to t... Read More

My first car and love it, I have the base model, so no power locks, windows, mirrors, abs or cruise control. But, being a 5 spd manual transmission makes it so fun to drive. Keep basic maintenance an... Read More

If you want a good car for basic transportation with low maintenance and operation costs, this is the answer. Good room inside and decent performance. Good mileage. Fun to drive. The car will keep... Read More