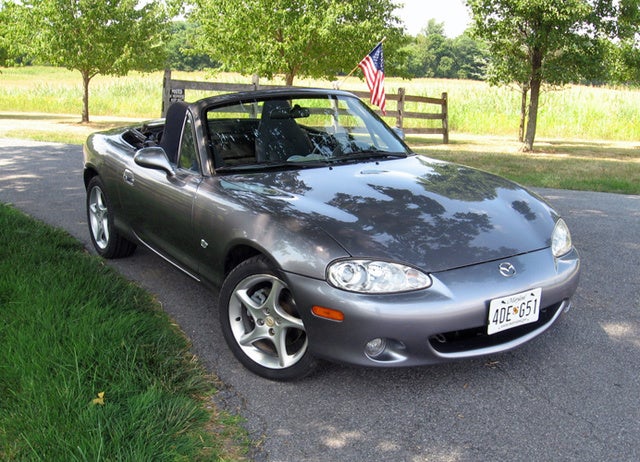 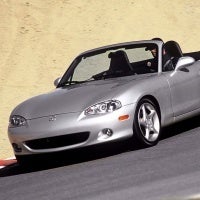 The Mazda MX-5 Miata was available in four versions for 2003. In addition to the Base, LE, and SE (Special Edition) trim packages that had been available the previous year, Mazda added a new Shinsen version, which was a step up from the Base model but not as outfitted as the higher-end packages.

One of the few upgrades for 2003 was the addition of 16-inch wheels to all Miatas (up from 15-inch wheels the previous year). In addition, all models received larger brakes, while the LS version got a cloth instead of a vinyl top as standard equipment.

Standard features across the line included air conditioning, power windows, dual airbags, and an audio system with a CD player. All models except the Base also received power door locks and cruise control, while the LS and SE versions were equipped with leather seats.

The Miata's overall driving experience, or fun factor, was what seemed to attract drivers most to the popular roadster. As can probably be expected with a car this size, interior room could be cramped, and the ride could be a bit rough over long distances. On the flip side, drivers like the Miata's reliability, styling, build quality, handling, and value.

What Is A Shinsen Convertible?

what does shinsen mean?

when starting car in a.m. it starts fine but misses until after a minute or so i can rev it up passed 3000rpm and continue to rev engine for about 30 seconds, then car runs fine

What Does IMV Indicate On ;listings.

New battery and alternator, car is 100% dead, no radio or anything. Hook it up to jumper cables and all is fine. Run it for a while turn off and 100% dead again. I am lost