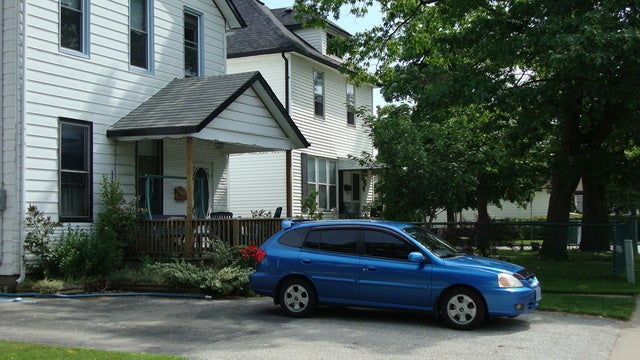 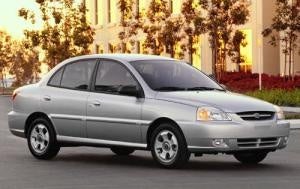 Exterior bodywork and some engineering tweaks mark the changes to the 2003 Kia Rio sedan and Rio Cinco wagon. Both get a new front grille, fascia, bumpers, and headlights. The sedan also gets redesigned taillights. The suspension has been reworked, disc brakes and stabilizer bars made bigger, and the steering column redesigned all in the name of better handling and reduced shudder. The 2003 Rio also gets a new, more powerful I4 engine, a 1.6-liter, 104-hp twin cam, still with a choice of 5-speed manual or 4-speed automatic transmission.

The subcompact Rio is a favorite car for budget drivers and those in need of a zippy city car that fits into small parking spaces. The Cinco wagon has extra storage, up to 44.3 cubic feet with the seats down. Rear seats in the sedan do not fold down. For 2003, the dash and center console are redesigned, and more storage compartments and cupholders are added. Automatic headlights, rear heater vents, and variable intermittent wipers are new for both trims, and the Cinco gets a standard CD player. New options for both models are foglights, dual map lights, and a sunglass holder. The Cinco wagon can add a body-colored rear spoiler.

Being one of the cheapest cars on the market, the 2003 Rio sedan comes with no power features. This year, the Cinco gets power windows, and a new Power Package adds power windows and locks to the sedan. The Cinco has more standard equipment than the sedan, with a rear wiper, tachometer, and power steering. With each year, the Rio is improving, and owners love its energetic new engine, which doesn't hurt the great fuel economy. The 2003 Rio is also surprisingly roomy, with good headroom. Some complain that warranty service has been bad, despite the great 5-year/10-year offer, and the rear legroom is tight, as it is in most subcompacts.

2003 Kia Rio Wagon Can I Put A Air Intake On With It Being Stock.

I'm wondering if i can put a cold air intake under the hood of my car with it being mostly stock besides the timing being advanced. I want my engine to be able to breath better and unrestricted as ...

The a/c is blowing warm air, I can't hear the compressor engage. I looked at it and it looks like it has a isolated ground coming by the fly wheel to where the 12 volt power wire clamps down on the to...

I have a 2003 kia rio. Engine is stuffed. Planning to put another second hand engine. The car has done 150k. Is it worth ispending the money cost $2200 to repair or look for another car .

hi i have a 2003 kia rio ls i am having trouble locating a replacement front right inner cv joint i was wondering if anyone knows were i could buy one on it own or do i have to buy the whole shaft a...