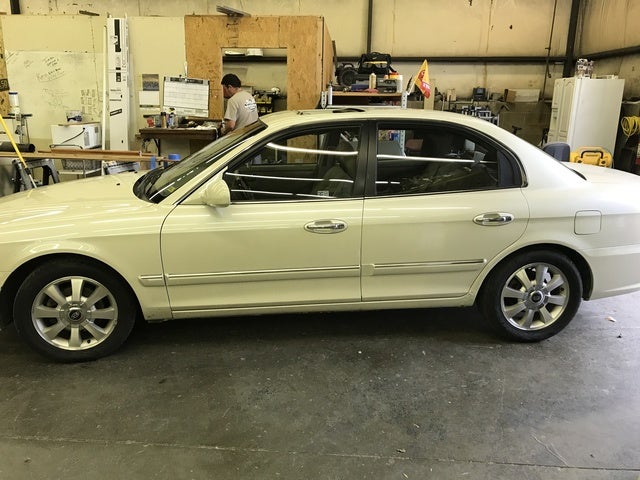 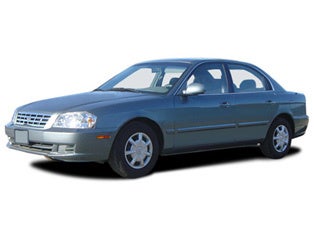 The Kia Optima has improved since its introduction in 2001, and its value, roominess, comfort, and smooth ride seem to outweigh the diminishing amount of mechanical problems. The 2003 Kia Optima also gets a fresh overhaul, mostly of its exterior, adopting a more European look with a new grille and new taillights. Inside, the doors, upholstery, and center dash console also get tweaked.

Available in two trims, the LX and SE, each trim comes with two engine options. Hyundai made a calculation mistake in its horsepower ratings, so the revised 2.4-liter I4 now gets 138-hp, and the 2.7 V6 gets 170-hp. Only the LX I4 comes standard with a 5-speed manual transmission. All other models feature a 4-speed automatic with sport shift. The base model LX was already well packed with power features, but it gets cruise control added this year, while the SE adds a garage opener, auto-dimming rearview mirror, and automatic climate control. There are more option packages for the SE that include leather seats, a power passenger seat, and a new wood and leather trimmed steering wheel and shifter.

Rear seats split-fold for more cargo versatility, and there is also a trunk pass-through. Though the rear seat has limited legroom, the cabin is actually larger than the Nissan Altima. The 2003 Optima carries Kia's famous warranty, which is a big draw for owners, though some say dealers sometimes don't honor it. Other attractive features include the quiet, smooth, and responsive handling, the exterior styling, and the fact that a lot comes standard at an inexpensive price. Drivers feel it definitely needs more power, especially the I4, which is like molasses off the line. The check engine light comes on constantly, and gas mileage could be better.

Have you driven a 2003 Kia Optima?
Rank This Car

After I Fill Up With Fuel, 03 Kia Optima Doesn't Start, Seems Like No Fuel ...

Every time I fill up my 03 Kia Optima with fuel while the car is off during fill up, when I go to start ignition, the car does not turn on. Anyone else have this issue? I have to turn key several time...

Find Why Engine Shut Off In Drive And Will Not Start

Where Is The O2 Sensor Bank 1 Sensor 1 Located?

How Do I Know When The Antifreeze/coolant Is Low In The Radiator Of A 2003 ...