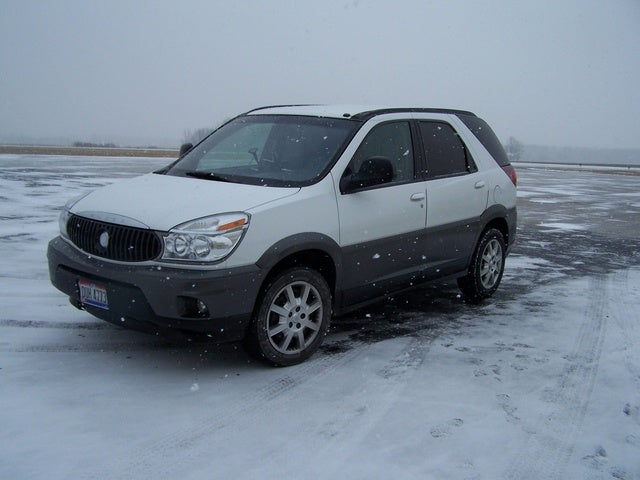 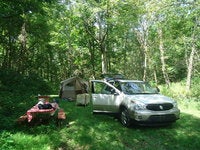 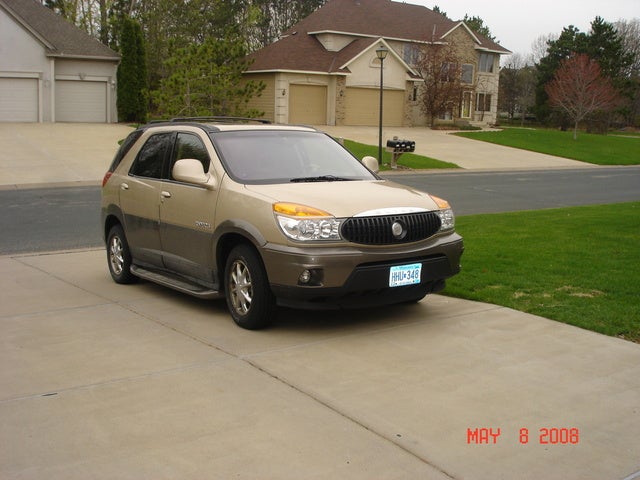 The term "SUV" has increasingly negative connotations as an oversized, gas-guzzling, grocery hauler, so most carmakers are opting instead to call their new SUVs crossovers. The 2003 Buick Rendezvous looks like an SUV, but handles more like a minivan, with a interior size and luxury of a Park Avenue sedan. The 2003 Rendezvous comes in CX and the more upscale CXL trims, and this year the CXL comes in both FWD and AWD, just like the base model. All AWD Rendezvous are accompanied with Versatrak traction control and ABS brakes. The all-range traction control and ABS in the FWD trims are now optional instead of standard.

Also moved from the standard to optional list are side airbags, though the dual front bags are still included. Dual-zone climate control is added to the CXL, which also gets a new DVD player and satellite radio option. The 2003 Rendezvous is powered by a 3.4-liter, 185-hp V6 and 4-speed automatic that is somewhat sluggish on hills. It comes standard with two rows of seats, but a third row can be added. Both rows fold, and the second row can be removed for extra storage capacity. Captain's chairs can be substituted for the second row, and there are even some handy footrests that pop out from behind the front row seats. New in 2003 is an electronic liftgate release, which is helpful, though the heavy hatch is still hard to close.

The 2003 Rendezvous has helped boost sales in the Buick division, primarily because it offers all the versatility of an SUV with the luxury of more upscale brands, all at a much lower price point. Drivers praise its roominess, though they wish there was more than 18 cubic feet of cargo room when the seats are up. The exterior styling is contemporary and rugged, and the car-like handling appreciated by soccer moms everywhere. A favorite feature is the optional heads-up display. But the Rendezvous suffers from expensive repair problems, most notably with the wheel bearings and intake manifold. Other downsides include limited third row legroom, second row seats being hard to remove, some wind noise, and an underpowered engine.

What's your take on the 2003 Buick Rendezvous?

Daqua Did the 2003 model come with a luggage rack

Have you driven a 2003 Buick Rendezvous?
Rank This Car

No Power To Fuel Pump

I bought a 2003 buick rendezvous from my grandmother over a year ago. Loved it and drove it until i bought a mustang this tax return. About a month and a half ago, I drove the rendezvous to work. ...

On A Trip My Car Just Died On The Hwy. When I Took It To A Mechanic He Said...

Light on dash board still reads change engine oil and car will not start. Please help.

My Car Is Making A Loud Noise In The Front End On The Passenger Side It Kin...

505 views with 2 answers (last answer about a year ago)