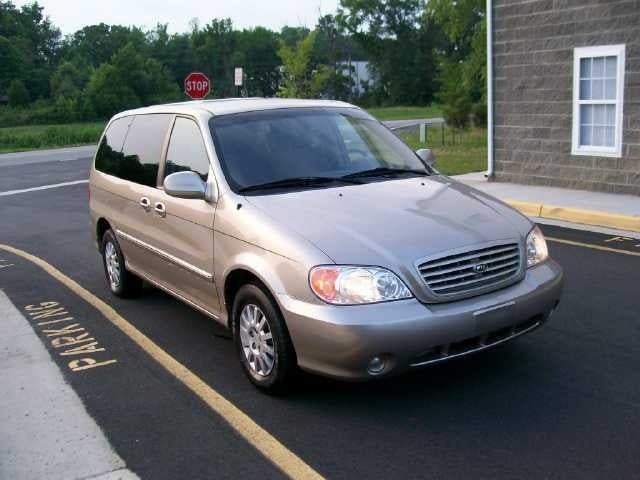 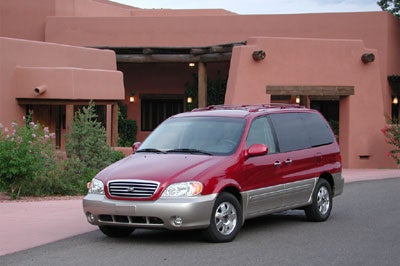 Slowly making a name for itself in the sedan and SUV segment, thanks to an unprecedented warranty and improvements in reliability, Kia decided to enter the minivan market with the 2002 Kia Sedona. Though it is Kia's most expensive vehicle, it was still one of the most affordable minivans offered at the time. The 2002 Sedona was longer than the Dodge Caravan and Toyota Sienna, offering three rows of seating for seven passengers.

The 2002 Sedona came in base LX and more luxurious EX trims, both with a 195-hp, 3.5-liter V6 engine and 5-speed automatic. Power windows, mirrors, and locks, cruise control, a CD player, and rear climate control were standard on the base, and the EX added power front seats, wood trim, foglights, and keyless entry. Leather upholstery and a sunroof were optional only on the EX. Though lacking in some now-standard minivan safety features, such as ABS brakes and traction or stability control, the 2002 Sedona earned 5-star crash ratings from the NHTSA (though only an average from the Insurance Institute). ABS brakes were offered as an option, though many owners complain that they weren't standard. No side airbags were available in 2002.

Other nice features on the Sedona include an abundance of cupholders for all three rows, a wide array of storage compartments, including a double glove box, four power outlets, and second and third row seats that both recline and slide back and forth to accommodate longer legs or more storage. Though neither row folds flat into the floor, like comparable minivans, they both can be removed in a somewhat cumbersome way. Power sliding doors are not offered, but many drivers say the manual doors were light enough to operate.

The first year for the 2002 Sedona had ups and downs. A lot of owners complain of numerous repair visits, specifically for A/C failure and transmission problems. And though these were often covered by the 10-year powertrain or 5-year basic warranty, many owners found it unacceptable. Poor gas mileage, an easily dinged up interior and exterior, and a bland style are other complaints. But as a practical family hauler, the 2002 Sedona offered good storage flexibility, plenty of legroom, a sturdy and solid feel on the road, and comfortable seats.

Have you driven a 2002 Kia Sedona?
Rank This Car

Dinging Noise And Brake Light On

In my Kia Sedona The brake light is on and there is a dinging noise that is driving me nuts ... I have checked fluid its perfect checked for leaks and none found , just had all new wheel bearings ...

Long story short, I think the ECM is bad but would like a second opinion before I spend the money on a new one. I swapped the fuel filter after having contaminated fuel, after the swap I couldn't...

45 views with 12 answers (last answer about a year ago)

Kia Sedona 2002 Steering Is Hard When Car Is Not Moving

When I am trying to leave a tight parking place in reverse, I cannot turn the wheels right or left without moving the car, because it feels very hard and makes a biting noise, sometimes there is no s...