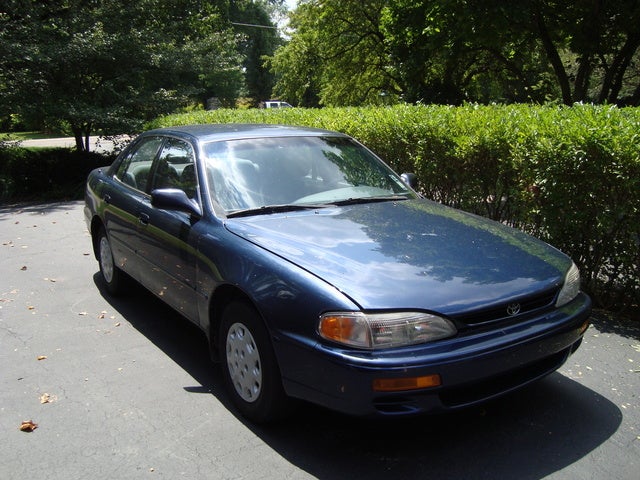 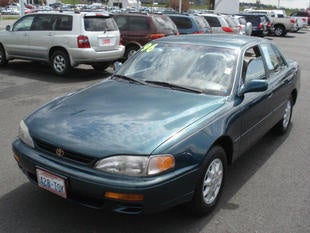 Due for a redesign the next year, the 1996 Toyota Camry did not change much from the previous year. For the first time, leather seating was an option in the LE trim levels of the Camry sedan, coupe, and wagon.

The 1996 Toyota Camry sedan was available in the DX, SE, LE and XLE trim levels. The coupe came in the DX, SE and LE trim levels. The base DX version of the wagon was dropped in 1995, leaving only the LE. Available engines were a four-cylinder, 2.2 liter or a V6, 3.0 liter. Fuel economy was about 20 to 30 mpg, depending on the engine. The interior of all 1996 Camrys was well-designed, featuring comfortable seats, plenty of head and foot room, and easy to reach, logically-placed control buttons.

Owners of the 1996 Camry say that the car is not much fun to drive. Except for in the SE model, the ride feels Ã¢Â€ÂœfloatyÃ¢Â€Â and almost too quiet and smooth, and there is not much interaction with the road. However, the Camry is meant to appeal to a wide audience, and many commuters might prefer a car they don't have to think about. By 1996, the Toyota Camry had firmly established its reputation for reliability and longevity.

Guru587L9 It's the greatest car. I bought mine new and still drive it without any problems. It never gave me any major issues since I bought it. I make sure to change oil every three months, buy Chevron gas and complete the regular maintenance. I recommend to park under a carport because the sun will mess the paint and get tinted windows to protect the interior. This car is a dream come true and still will go for many years!

GuruLL57L I just drove 25 miles from home to test drive one this morning, base DX model with 161,200 miles but it’s a single owner, seemingly well taken care of and didn’t show fault codes when hooked up to my OBD2 scanner... the owner said he’ll bring it to me within a few days and let me have a mechanic inspect it. Has trouble blowing cold ac and he says it may need new compressor. Whatever it needs, I hope it’s cheap cos I’m dead tired of having car troubles! I sold a 2008 audi tt I had for a year about a month ago because it cost me $3,000 in repairs/maintenance! Smh

Have you driven a 1996 Toyota Camry?
Rank This Car

mY AUTO CAMRY STALLS WHEN CRUISING TO A STOP. oFTEN WON`T START STRAIGHT AWAY.

15 views with 2 answers (last answer about a month ago)

Hi, I have a V4 1996 Camry that had a rapid, loud clicking noise (seems to be by the timing belt and engine) when idle and it mostly went away while accelerating. Check engine light came on about a ...

THE ENGINE STARTS AND THEN DIES AS IF IGNITION OR FUEL SUPPLY IS CUT DURING...

THE CAR STARTS WHEN CRANKED STARTS THEN DIES AFTER 3 TO 5 SECONDS. WHEN CRANKED AGAIN STARTS AND DIES IMMEDIATELY, LATER AFTER SEVERAL CRANKING IT STARTS, THE ENGINE RPM POINTER BEHAVES AS IF THE ENG...

i have a lexus es300 are the headlights interchangeable wiith any toyota. Thanks tony

1996 Camry Spark Plug Popped Out And There Is Oil Inside?

I checked the oil on the car the other day and it was low. Wile filling it up saw that one of the spark plugs is out. Pulled it out and there is oil in there. After a few days the car started chokin...