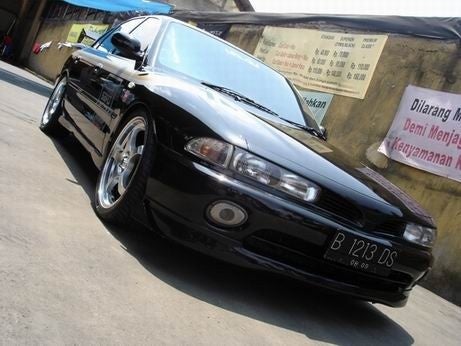 Have you driven a 1995 Mitsubishi Galant?
Rank This Car

Even though I didnt purchase the car, it drove great! Read More

The car has a good feel to it, doesn't feel too large or small on the rode, handles well, has should belts for 3 people in the rear and front and side are bags which I really like. extra safety is a p... Read More

Better Than Expected By Scott

It is white has a 4 cylinder and corners like a car much smaller than it is. I haven't had to do any repairs other than change the wiper arm. Its not the car I would've picked for myself but drives ... Read More

It's my fist car, so I don't really have much more to say. Been using it since fall semester last year; dad won it at an auction for $10k with a few thousand miles. To anyone else as fortunate to have... Read More

-Overall I rate this car an 8.4 out of 10 Between the gas that the car uses, and the lack of needing to do maintenance every weekend on the vehicle. This is a very good car to purchase for your tee... Read More

This is a very good car for the price. It is not fancy. Did not come with a lot of fancy upgrades. For the price it is a good, solid, reliable car. I really like it. It has a roomy trunk and passenger... Read More

I Love This Car!!! By Tammie

Just purchased my Mitsubishi today and I love it!!!! Previously had an '03 and traded it for the '09. I find it to handle the road quite well and the interior is nice. I guess that you have to be a M... Read More

I wish it had a temperature gadge in it and the thing that tells you the songs that are playing. I also would like the "distance until empty" feature like my truck has. I love the dual transmission, I... Read More

My Galant By Syed

Have you driven a 1995 Mitsubishi Galant?
Rank Your Car →