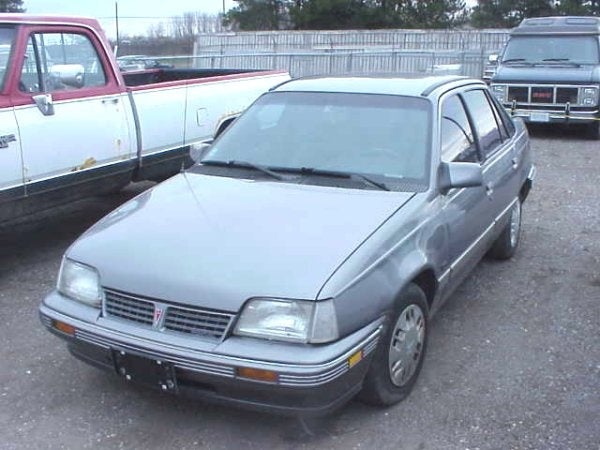 The last year for this roomy compact sedan and coupe, but the 1993 Pontiac Le Mans makes a few stylistic changes to its front and back end and adds new wheel covers. The SE sedan and coupe add standard power mirrors and a sports suspension. The SE coupe already featured a tachometer, fog lights, and a rear spoiler, so it clearly wanted to at least project the image of a street performer, even if it only carried a 1.6-liter, 74-hp I4 inside. This engine was standard across the lineup, including the most economic Value Leader coupe. A 5-speed manual was standard, except on the Value Leader, which had a 4-speed manual.

As the base model, the Value Leader coupe did offer seats and power brakes, but not much else. A radio and sunroof were optional. The SE coupe and sedan boosted the creature comforts just slightly with tinted windows and a radio. Power steering was optional on SE models, but not on the Value Leader.
The 1993 Le Mans was no great beauty, nor was it particularly fast. What it had going for it was an affordable price, decent reliability, great gas mileage, and lots of passenger and trunk room, making it attractive to first-time buyers who don't have much in their wallet. Owners liked the surprising amount of room for a compact and the fuel economy. But the 1992 Le Mans had many visits to the repair shop, particularly for frequent brake replacements. Parts are hard to come by these days, so they can be expensive.

Have you driven a 1993 Pontiac Le Mans?
Rank This Car