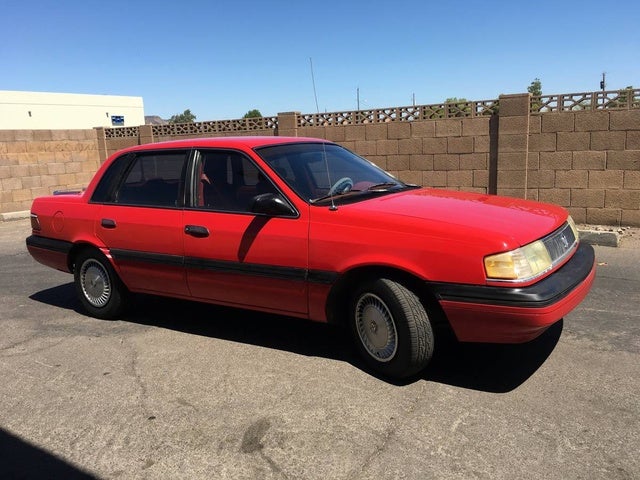 Have you driven a 1991 Mercury Topaz?
Rank This Car

It's Friggin Paid For!!! By Nicklaus

It's in perfect shape, gets great mileage and is my general all around work car. Poor Performance, I have to beg it to get up to 60. It's not really fun but it does the job. Plus I'm not concerned ... Read More

This car is great to get you from place to place; it serves the primary function of a car very well. Styling is typical 90s econo-box, and acceleration is mild (though not quite as slow as automatic m... Read More

The Topaz is the first car I've owned. And aside from needing to replace the head gasket after I bought it, it runs pretty good. There will be modifications made soon...I will be giving it a custom ... Read More

Holding Up Well By Pam

I've put this car through the wringer and it comes back for more. Read More

Very Missed Vehicle And Was Always Loads Of Fun. Never Let Me Down Ever. By Paul

The 1992 LTS model was only produced for that year . Mine was White with grey frost lower half and blue interior. The exterior came standard with ground full affects kit with lower body stripsin silve... Read More

eh, its a canadian car. so it can make it through any kind of snow or rain :) nice and fast, tested it myself to 130mph, gets a lovely 20mpg, and still has the power to take out and ricer out there! Read More

Buy It If Its Under 1k. Its A Fun Car That You Can Roll And No One Cares. By Kyle

Tim is a solid little car. Comfy seats. Not the worst looking either. Stayed in good condition considering its older than I am, only had to fix the breaks so far. Sadly though, NO BALLS. 95hp. And not... Read More

Stay Away! By Ryan

I owned this car for about 4 months over the winter. First I got this car for $250 and for a reason at that. This car is very easy to break, the driver side window does not work the transmission st... Read More

0 to 60 in 2.9 sec this car has awesome brakes! It will always brake before the cross walk. This car will last forever 65 miles to the gallon chick magnet - ladys love the Topaz very fun to drive - h... Read More

I left my car on the side of the road. I paid $400 for it, so I guess I got my monies worth. But, it stalled everytime I stopped, and the breaks were destroyed. It was great to learn to drive on thoug... Read More