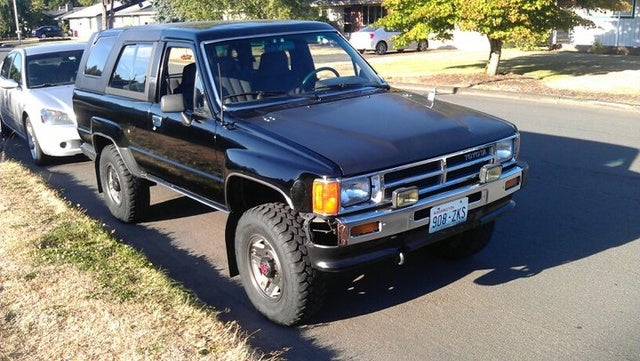 Have you driven a 1988 Toyota 4Runner?
Rank This Car

Got a NEW 2021 black SR5, 4wd, 3row with the black out package (blacked out emblems and TRD 17s). Its a comfortable ride, good stock height, and gotta love that back window that goes down. Theres a bu... Read More

I just purchased the 2021 - 4 runner, limited, nightshade a few days ago. I had a Cadillac SRX . I am not super familiar it yet, but I love the sporty look and feel and I like being up higher. I mis... Read More

For what I’m looking for it is perfect. Only thing I would ask for is a little more torque. Read More

Nice and clean vehicle. Not too many features like other brands. Drives OK but cannot expect superb acceleration. It is probably same category as Ford Explorer but less features. Interior is a bit out... Read More

Amazing vehicle with great options. worth every penny Read More

I love the color! I want it so bad! Read More

This was a great car! My guess is that it was under priced by $6-8000 due to all the extras on it. I will miss not having a USB port in it, however. I compared it to Honda Pilots and Toyota Highla... Read More

You can never go wrong when buying a 4runner. Read More