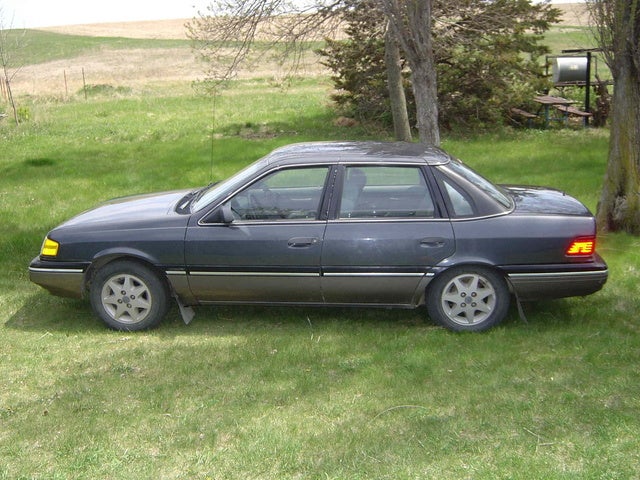 Have you driven a 1988 Ford Tempo?
Rank This Car

Well-equipped But Unreliable Transportation By Schwartzy

Accessories are top-notch for the model year and price point and include AT, AC, CC, PW, PL, PS, and PM. Acceleration, braking, handling, and overall ride are all acceptable, even on extended drives. ... Read More

Ok Overall When Properly Maintained, And Given Plenty Of TLC, The Ford Tempo Gl Is A Great Vehicle, Given The Shear Weight And Stature Of The Vehicle It's Performance:A+ Build Quality:A+ Appearance:A+... Read More

Good First Car If You Are Looking To Drive A Car For A Short Period Of Time. By Brittany

I bought this car for 700 dollars. What I needed to replace was a gas tank, brakes, routers, the muffler is completely rusted. I drove this car for almost 2 years and all of a sudden the wheel be... Read More

Fairly good performance for 2.3Liter, Still runs great with good gas mileage fair on expense except for a few design flaws sure was not made to drive on Michigan's pot filled roads.Body has held up ve... Read More

It is was it is. It was a fun little car to own, it was reliable and cheap to run. I never had any complaints with this car but when the family started to grow so did my need for a bigger car. Thats t... Read More

Its Overall Good. I Find It Wierd That Everyone Bashes On This Car. This Car Has Treated Me Well. By Chris

very small and very quick ford. ive owned the 4cyl and the 6 cyl(which is this one) and the 6 cyl is a powerhouse. it handles turns really well and is a very fun little car to fool around in the snow.... Read More

Reliable Cheap Transportation With The Bonus Of Awd By Greatman

It is not a very fast car but this one might be the fastest Tempo in the area I live in. Easy to work on. Parts are cheap to buy.No matter how much this sits around my place if another car is giving m... Read More

It Gets The Job Done By Ryan

Slow, ugly and amazingly fun to beat the crap out of and not care because luckily these cars practically go for free! 2.3L engine with a 3 speed auto wasn't cutting it though. It could have been bette... Read More

It will get me to point a then point b, but it takes it time changing gears. A mechanic said some of the governor gears were striped out. And it starts to run hot when sitting still to long, the fan s... Read More

My 1990 Ford Tempo is and all around beast. It is a very good runner and can do minor burnouts. Its is worth about 500 dollars but it is worth more than that to me. It is very fun to drive around a... Read More

Looking for a Used Tempo in your area?

CarGurus has 4 nationwide Tempo listings and the tools to find you a great deal.