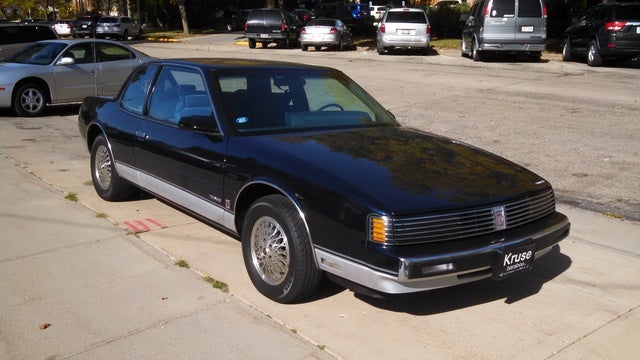 Have you driven a 1987 Oldsmobile Toronado?
Rank This Car

My parents owned a 1992 Oldsmobile Toronado several years back. It was fun to drive (as I was only 17 at the time), but was huge in every respect. It had a big V8 that guzzled gas and enough leg roo... Read More

Good engine and transmission. It does torque steer. Rough body and paint has a tendency to fail. Leather seats fail if not taken care of. Read More

this was actually my brothers car but i drove it for about a year and a half. it got about 22 mpg, with the 3800 v-6, this car ran really well, handled awsome, had tons of gadgets. most of which di... Read More

This was my first car, and will probably always remain my favorite. Sturdy build, and the ride is fantastic- rides so low to the ground you feel like you're driving a racecar. For a mid- 80s vehic... Read More

This boat is a classic. Made back when cars were suppose to offer a comfortable ride. Bench seating in the front makes for great dates. ;) Not a fan of the 'red' or rather orange paint, but still shar... Read More

I got this car off the first owner and I live around the corner of him and ever since I was 8 years old I told my mo, that will be my car someday and now it is what else is there to say lol! It is a ... Read More

Have you driven a 1987 Oldsmobile Toronado?
Rank Your Car →